16-year-old began season on USL Academy contract with Rising FC, is first to move up to pro contract in club history 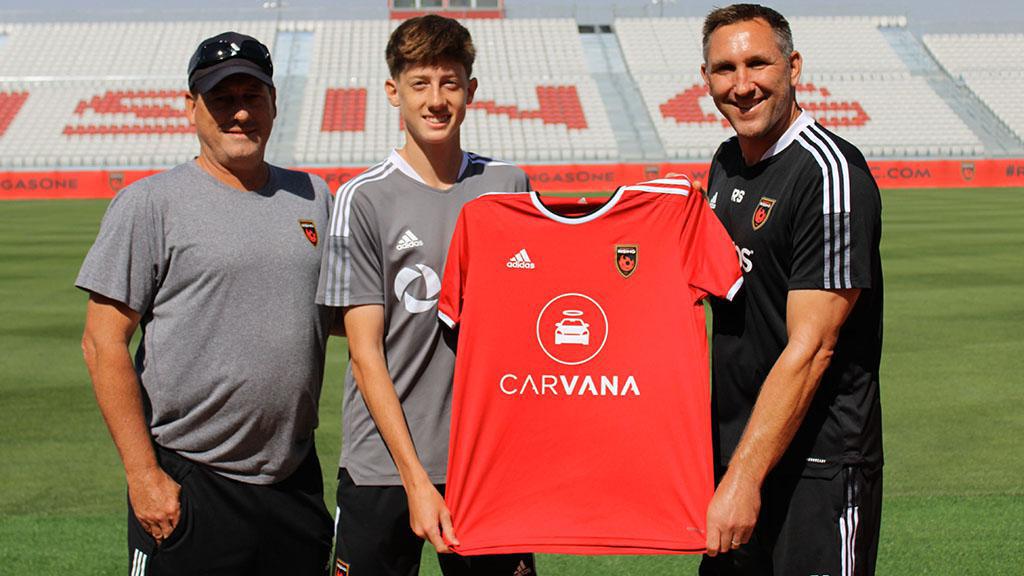 16-year-old Niall Dunn has turned professional with Phoenix Rising FC having previously been a USL Academy signing for the club during the 2021 USL Championship season. | Photo courtesy Phoenix Rising FC

The Phoenix youth product had previously been a USL Academy signing with Rising FC, joining the First Team on Monday, April 26. While the USL Academy contract initially signed by Dunn preserved his college eligibility, the progress he made in recent months, training with and learning from professionals, made it clear to the Rising FC coaching staff the defender had an immediate future in the professional game.

“Coming in and training every day with the pro team and getting games with the academy, I was able to gain confidence and feel like I belonged,” said Dunn. “Towards the end of preseason, after I had played a few games against MLS teams, everyone became more accepting of me. That is when I knew this was the right place for me. That I’d be able to adapt to the professional level.”
Dunn joined Rising FC’s youth ranks in 2014 and worked his way up to the academy level in 2020. He began training with Phoenix’s First Team in early March. After holding his own in several matches against MLS competition this preseason, Dunn signed the USL Academy contract in April. Rising has signed seven youth players to USL Academy contracts in its history, and[NM1]  Dunn is the first to make the leap and sign a professional contract.

“As soon as he signed the academy contract, he sat down with our strength and conditioning coach Sean Buckley,” said Rising FC Head Coach Rick Schantz. “Niall’s working hard to be the best he can be. He is learning from guys like Solo [Asante], Joe [Farrell] and [Kevon] Lambert, listening to the coaches and watching film – everything he can do to become a pro.
“This is only the second step. He knows he has a long way to go but I hope to one day see him competing for the U.S. National Team. I’ve always believed Arizona was loaded with talented players. It has been a hidden gem for a number of reasons, but number one was we never had a high-level professional club. There’s a long list of players that have played for the national team or for professional teams and done very well. Now, for players to be recognized at a much earlier age and potentially play professionally here in their hometown, I hope we’re creating more dreams and goals for young kids. That’s what it’s all about. They have to aspire to do something. We hope playing for Phoenix Rising becomes one of them.”

“The difference for me has been the constant work and competition,” said Dunn. “It’s a whole different environment that I’m starting to love. My goal now is to continue working and hopefully get some playing time with the First Team this season.”