Charleston Battery’s Joe Kuzminsky voted Player of the Week after shutout, penalty save, assist vs. Charlotte

TAMPA, Fla. – The USL Championship announced the Team of the Week Presented by Cleer Audio for Week 14 of the 2021 regular season on Tuesday, with Charleston Battery goalkeeper Joe Kuzminsky voted Player of the Week after becoming the first goalkeeper in the Championship’s history to record a penalty save, an assist and a shutout in the same contest against the Charlotte Independence last Friday night.

A longtime standout for the Battery, Kuzminsky produced a unique performance against the Independence in the first edition of the Southern Derby this season at Patriots Point. The 27-year-old made a crucial play in the first half to deny Charlotte’s Sylvain Marveaux from the spot to keep the game scoreless, and after the Battery had taken an early second-half lead Kuzminsky notched an assist in stoppage time as his long ball upfield set up Joel Bunting for the cap on a 2-0 victory. Eight goalkeepers in the Championship have recorded an assist and a shutout since the start of the 2014 season, but none has also recorded a penalty kick save as part of their night’s work.

Kuzminsky earned 60 percent of the ballot to claim the honor. Birmingham Legion FC’s Jonathan Dean finished second on 27 percent as he scored a late game-winner and also had an assist in his side’s 2-1 road victory against Indy Eleven on Saturday night, while San Antonio FC’s Jose Gallegos finished third for his one goal, two assist performance to lead SAFC past New Mexico United last Wednesday. 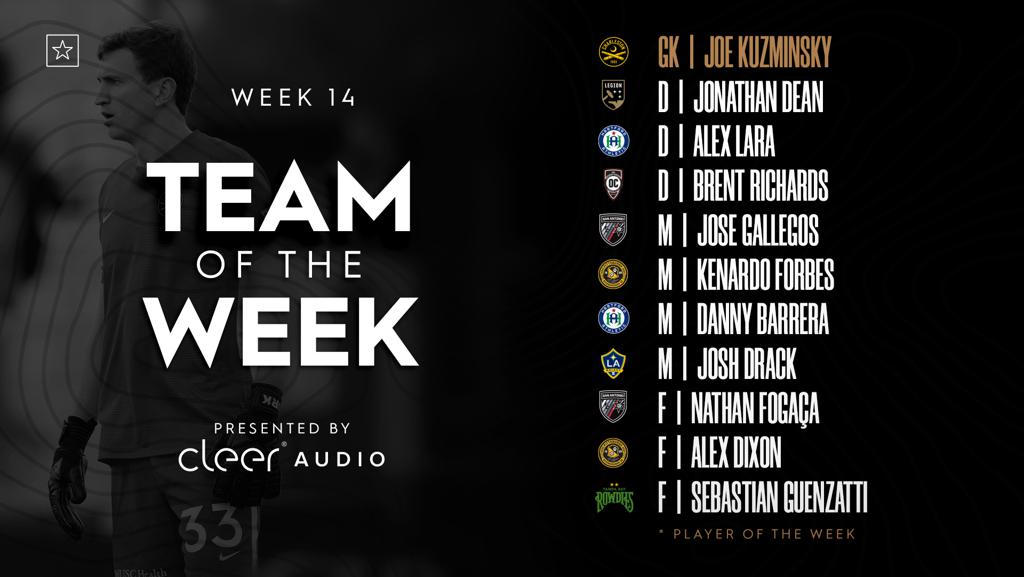 GK – Joe Kuzminsky, Charleston Battery: Joe Kuzminsky achieved a Championship first in recording both a penalty-kick save and an assist in a shutout for his side as the Battery took a 2-0 victory against the Charlotte Independence on Friday night.

D – Jonathan Dean, Birmingham Legion FC: Jonathan Dean scored a stoppage-time winner to lift Birmingham to a 2-1 victory on the road against Indy Eleven on Saturday night, capping a performance that also saw him record one assist, six key passes and complete 43 of 51 passes.

M – Danny Barrera, Hartford Athletic: Danny Barrera recorded both assists in Hartford’s 2-0 victory against Miami FC – moving into third place in the Championship all-time – and completed 43 of 53 passes and six key passes overall in helping his side to victory.

M – Josh Drack, LA Galaxy II: Josh Drack notched a goal and an assist to help lead Los Dos to a 3-0 win against Oakland Roots SC on Sunday afternoon and was sharp on the ball throughout, completing 27 of 29 passes and winning 9 of 12 duels defensively.

F – Alex Dixon, Pittsburgh Riverhounds SC: Alex Dixon had a goal and assist in the Hounds’ 3-1 victory on the road against the New York Red Bulls II, and also won 7 of 11 duels and made 13 recoveries defensively in a fine two-way performance.