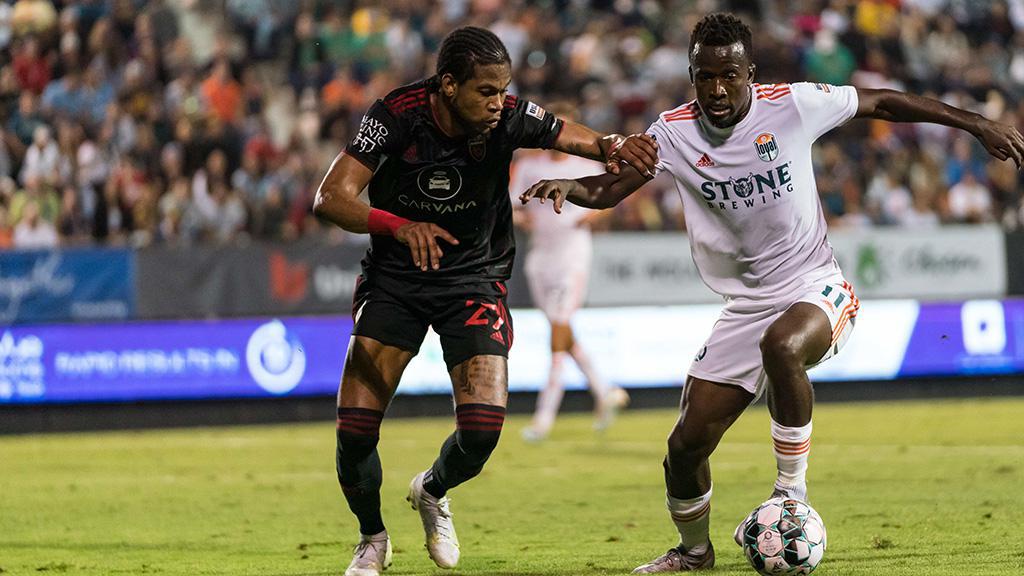 The USL Championship’s Western Conference produced a signature road performance by the conference title favorite and some late goals that fueled dramatic endings on Friday and Saturday night. Here are five things we took away from the weekend’s action.

Going purely by the numbers, there weren’t many differences in the 2-1 defeat Phoenix Rising FC suffered in its first visit to face San Diego Loyal SC at Torero Stadium on June 19 and its 1-0 victory on Saturday night to wrap up the regular-season series between the Pacific Division contenders. In both games, Rising FC had a sizeable advantage in shots, conceding only six shots to their hosts in each contest.

What was noticeable about Saturday’s rematch, though, was how Phoenix prepared for and then controlled the areas San Diego had found success from in their prior meeting. Where previously there had been space and opportunity for Jack Blake to rip off a pair of clean finishes from outside the penalty area, this time around there was the waiting presence of Kevon Lambert and James Musa, both of whom did the work that helped frustrate the hosts, whose substantial advantage in possession didn’t result in many clear-cut opportunities.

Lambert in particular had a fine overall display, anchoring the midfield while recording 10 recoveries and winning 2 of 2 tackles, both of which came in the right attacking channel that Blake attacked to such good effect on June 19. With that option removed for the hosts, the early goal the hosts created off a set piece as Musa tapped home after a header by fellow center back Joe Farrell inside the penalty area proved enough to end SD Loyal’s nine-game undefeated streak and extend Phoenix’s lead to seven points at the top of the Pacific.

So, while the game at Isotopes Park ended in a scoreless draw that saw both sides have chances to grab victory – including another set piece special for New Mexico that resulted in Josh Suggs’ firing a shot that was tipped onto the post by Locomotive FC goalkeeper Logan Ketterer – the result was likely a fair one as United matched its visitors mentally in a game that was – as others in this rivalry have proven – somewhat chippy throughout.

“I think El Paso does a great job of having one another's back,” said Lesesne. “They fought together. But, I think we went toe-to-toe in that aspect tonight in every way we could. That's what we have to do. That's a mentality thing. We have to be able to have one another's back at every stage of the match, because that goes toward a result at the end.”

On a night that saw the side both welcome its largest crowd of the season with 10,303 in attendance and announce in concert with Albuquerque Mayor Tim Keller plans to bring a proposal for a bond issue before the City Council on August 2, the battle on the field was the latest in what right now might be the most intense rivalry in the Championship. 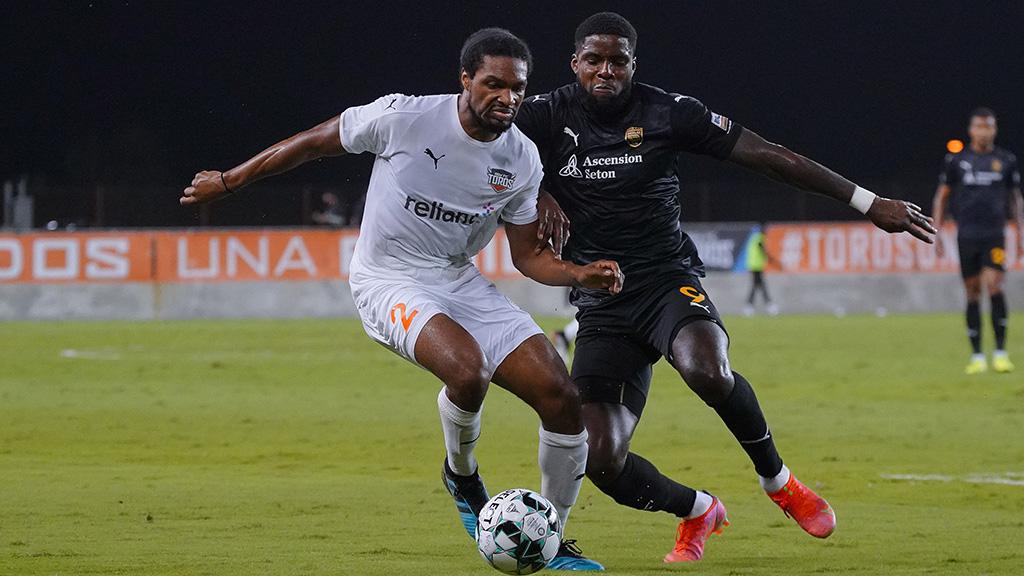 Midway through the second half at H-E-B Park on Saturday night it felt like things were under control for Rio Grande Valley FC. The hosts had earned an early lead through Juan David Cabezas and were now up a man after Austin Bold FC’s Juan Pablo Torres received a second yellow card early in the second half.

But the Toros squandered both their advantage and their lead late on as Xavier Baez came through with a fine volleyed finish five minutes from full time that resulted in a 1-1 draw between the Copa Tejas rivals and kept RGVFC from its first win against Austin this season, to the frustration of Head Coach Wilmer Cabrera.

“We didn’t have a very good second half,” said Cabrera. “The worst-case scenario was when they got a red card. When they got the red card, we could’ve relaxed a little bit and that’s dangerous and we thought that we got comfortable. We tried to make some changes, we tried to bring new intensity, but it didn’t work. It didn’t work well for us and sadly, they had this one chance … it was then a cross that we didn’t anticipate and the guy from the middle, one guy came in and just finished the ball. Again, we tied again against this team, and we lost two points at home.”

The Toros are still in a strong position in the Mountain Division’s standings, but with San Antonio FC’s resurgence in two consecutive victories adding to the congestion around the playoff line, it’s looking more and more likely that this is going to end up a six-team fight for four playoff places. In that context, points dropped at home could end up being costly, as Cabrera is well aware.

When a team lets a lead slip late at home like the Toros, it will feel like points dropped. On the other hand, if you find a late equalizer yourself – even on home turf – then it’s remarkable how the glass suddenly seems half-full. For Colorado Springs Switchbacks FC a 1-1 draw against Louisville City FC at Weidner Field on Friday night felt like the latter as Michee Ngalina’s finish with three minutes to go salvaged a result against one of the Eastern Conference’s tougher sides.

“It was a tough one for sure, against one of the top teams in the league,” said Switchbacks defender Jimmy Ockford after facing his former club. “They have one of the best organizations in the league as well, so we always know that they're going to come and fight, but I think we came into it well. I think the first half we definitely defended a lot of the game, but once we got into it, we created a lot more chances for sure. It's unfortunate that we didn’t get the clean sheet, we let in a goal, but we got the point out of it and at least we got a result.”

The Switchbacks still have work to do in terms of their position in the Mountain Division, sitting in fifth place with games in hand on third-placed New Mexico United but also with the presence of Austin Bold FC and San Antonio FC around the playoff line. With a visit to Austin coming on August 4, though, the mood will likely feel brighter in training this week thanks to Ngalina’s late finish.

“I saw that the center back was a little bit late and so when I got that space, I just made my run and I shot for the goal,” said Ngalina after the game. “[The fans’ reaction], that made me so happy. There were four or five goals that I felt I didn’t score, so it was about being strong mentally. I knew I had to finish one.”

What is it about late emergency attackers for Sacramento Republic FC lately? After Mitchell Taintor’s last-gasp equalizer for the side at San Diego Loyal SC on July 3, this past Saturday it was the turn of former Academy product Nabi Kibunguchy to come through moments after being introduced as a last roll of the dice by Head Coach Mark Briggs to give the visitors a 2-2 draw with Orange County SC at Championship Soccer Stadium.

“I’m still on cloud nine right now,” said the Elk Grove, Calif. native after scoring his first professional goal. “It's a crazy feeling...I’m sure it'll be hard for me to get sleep tonight. It’s an awesome feeling scoring from my hometown team and being able to contribute and getting the point. I'm really happy for myself and really been working hard towards, towards a moment like this for my first personal goal. So only up from here.”

There’s still improvement needed from Republic FC if its going to end up in the postseason within a five-team group that saw only the LA Galaxy II take victory in the past weekend. August could give us an indicator of whether that’s going to happen as the side faces Tacoma Defiance (Aug. 5), Oakland Roots SC (Aug. 11) and Las Vegas Lights FC (Aug. 14) in its first three games of the month. For now, though, the side will try to carry the emotion of Saturday’s escape with it as it heads home with a point.