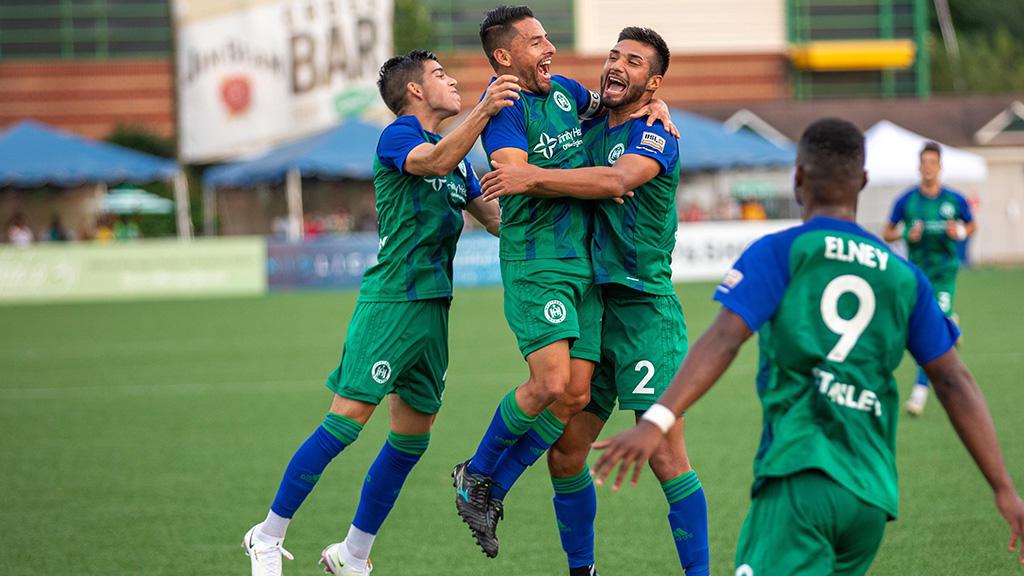 Hartford Athletic produced a 2-0 victory against Miami FC on Saturday night at Dillon Stadium that burnished their position as a serious contender in the Atlantic Division this season. | Photo courtesy Hartford Athletic

There was plenty to enjoy across the Eastern Conference this past weekend, including some remarkable individual performances and team displays that continued to shape the direction of each division. Here are five things we took away from the action.

How a team responds to defeat can often be the marker as to whether it’s going to end up as a contender for either the postseason or even more at the end of the season. The same can likely be said of how a team responds to having a twist thrown at it in the buildup to a game. In Hartford Athletic’s 2-0 victory against Miami FC on Saturday night at Dillon Stadium the hosts showed they have the capability to deal with both in impressive fashion, earning a second victory against a Miami side that has shown its own major improvements since the start of the season despite the absence of Head Coach Harry Watling and assistant John Stead from the sidelines due to COVID-19 protocols.

Thanks to sterling performances in all areas of the field – you can start with Danny Barrera’s two assists, which moved him into third place in the Championship’s all-time list for regular-season helpers on 39 for his career, and then work your way back to goalkeeper Jeff Caldwell and defenders Alex Lara and Tulu – the Athletic moved into third place in the Atlantic Division while sitting with games in hand on division leaders the Tampa Bay Rowdies and Pittsburgh Riverhounds SC. With a clash against the latter coming up next weekend, Hartford is putting itself in position to make an even bigger splash than it did a season ago.

“Fortunately, we have a phenomenal staff here we have a phenomenal group of players here,” said Caldwell. “And so, we're able to prepare. You know well and consistently well, it's not just hard work, it's worked on well. And I think that's, that's not just me, that's the whole group and you see that I mean we, we played really well tonight as a group.”

You could have made a very good case for Caldwell’s performance for Hartford being the best by a goalkeeper over Week 14’s action in the Championship if not for what had happened on Friday night at Patriots Point. In a first in the Championship’s history, Charleston Battery goalkeeper Joe Kuzminsky recorded a penalty kick save, an assist and a shutout in his side’s 2-0 victory against the Charlotte Independence that gave the hosts the edge in this season’s edition of the Southern Derby.

Kuzminsky’s penalty kick save to deny the Independence’s Sylvain Marveaux in the first half might have been the most important moment of the match, keeping the game scoreless in the first half before second-half goals by Nicque Daley and Joel Bunting – assisted by Kuzminsky on a long upfield ball that the first-year pro finished off with a beautiful lobbed finish from outside the penalty area – moved the Battery ahead of their regional rival in the Atlantic standings with their second consecutive victory.

“You know I just go in and do what's best for the team and if that requires saving a PK, then I'll do that,” said Kuzminsky. “It was a chippy, sloppy game, but sometimes you just have to grind it out and that's what we did to come away with the win.”

Kuzminsky is the third goalkeeper to record an assist this season, and the eighth in the Championship’s history to post an assist and a shutout in the same game all-time with Birmingham Legion FC’s Matt VanOekel having also accomplished that feat earlier this season against Memphis 901 FC, but the exuberant crowd at Patriots Point got to see something unique on Friday night, which is part of why we got to the games in the first place, isn’t it? 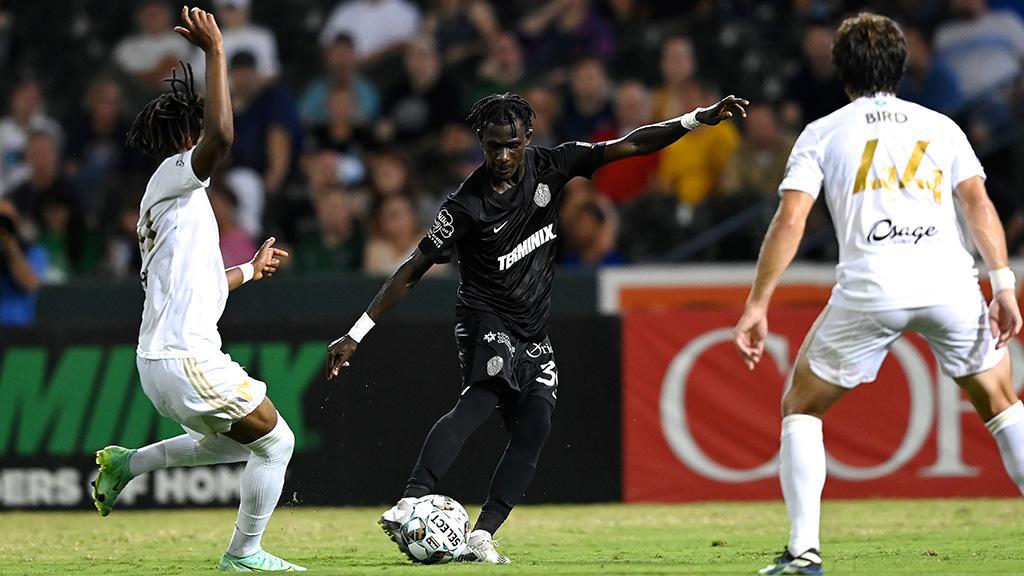 Memphis 901 FC's Laurent Kissiedou was one of the key cogs as his side took a 1-0 victory against FC Tulsa on Saturday night to complete an undefeated month of July. | Photo courtesy Eric Glemser / Memphis 901 FC

It was by no means the prettiest performance of the weekend, but in Grind City that’s not always necessary when you come away with a win, and that’s just what Memphis 901 FC accomplished in a 1-0 result against FC Tulsa that completed an undefeated month of July for the squad and moved it within two points of the playoff places in the Central Division with games in hand on the team currently in fourth, OKC Energy FC.

The epitome of the performance would have been Kyle Murphy, who after a clash of heads left him first bleeding and then bandaged up to return to the action in the opening half produced the only goal with – of course – a header to the left side of the net from a good delivery by Puerto Rico international Raul Gonzalez. Murphy was substituted at halftime, but not before making the decisive contribution that 901 FC’s back line made stand up as goalkeeper Kyle Morton made a key late save to deny Tulsa’s Marlon an equalizer.

“Not just tonight, but every night, there’s always room to improve and look at the positives and negatives,” said Memphis defender Mark Segbers. “We worked hard, stayed together as a unit and made it hard for them to score. At the end of the day, three points are three points and we’re happy with that. On to the next.”

Memphis’ undefeated month is its first since its inaugural 2019 season and should have Head Coach Ben Pirmann in contention for Coach of the Month honors for July. While the side next faces Sporting Kansas City II on Sunday afternoon, everyone should be now circling 901 FC’s visit to Energy FC on August 7 in what will now be a playoff six-pointer as the midway point of the season approaches.

Since he joined Birmingham Legion FC prior to the start of the 2020 season, no-one has played more minutes for the club than Jonathan Dean, whose consistency on the right side either as a full back or a wingback when the team shifts into a three-man back line has made him a staple in Head Coach Tommy Soehn’s lineup.

On Saturday night, though, Dean added another note to his growing an impressive resume in the professional ranks with his second regular-season goal providing a stoppage-time winner for the visitors against Indy Eleven at Michael A. Carroll Stadium that capped an exciting conclusion to a game that tilted back and forth in the late going after Indy’s Jordan Hamilton had equalized with 13 minutes to go. Dean’s strong two-way performance – which also saw him provide an earlier assist on Prosper Kasim’s opener – was consistent with the work he’s put in as one of Legion FC’s key players.

“I think I was able to bring attacking moments tonight because we played well in possession as a team which allowed me time to get in higher positions,” said Dean. “I picked my moments to go and fortunately tonight it paid off. The goal happened pretty fast to be honest, I was in the right spot and laid it off to Neco [Brett] and then fortunately it popped back out to me and in my head, I said ‘I’m going to hit this’ and luckily I struck it well and it went in.”

Pittsburgh Riverhounds SC made an ideal start to its visit to the New York Red Bulls II on Friday night at MSU Soccer Park with a goal in the opening 10 minutes by Alex Dixon, but the flow of traffic created by the hosts through the middle of the field saw the Red Bulls II not only pull level on a finely-taken finish by Omar Sowe but find the better chances late in the first half.

That wasn’t lost on the Hounds or Head Coach Bob Lilley, whose adjustments at the break effectively stifled New York in the second half while turning possession recoveries into fluid movements of their own. That resulted in a 3-1 victory as the midfield duo of Todd Wharton and Danny Griffin each recorded double-digits in recoveries, aiding the front seven in Pittsburgh’s lineup as it quickly shifted the team onto the front foot to get goals from Russell Cicerone – his seventh of the season – and Albert Dikwa inside the opening 20 minutes after the break.

“I thought in the second half, we did better managing the game,” said Lilley. “We got quality looks, we were more connected, we defended better, and we connected passes better. … We cleaned things up and were a lot tighter. We connected when we won balls, we found outlets and used the wide areas. We ran into problem losing little balls in the middle of the field in the first half, and sometimes you just have to hit the ball out wide and trust that someone is going to be out there where they’re supposed to be.”