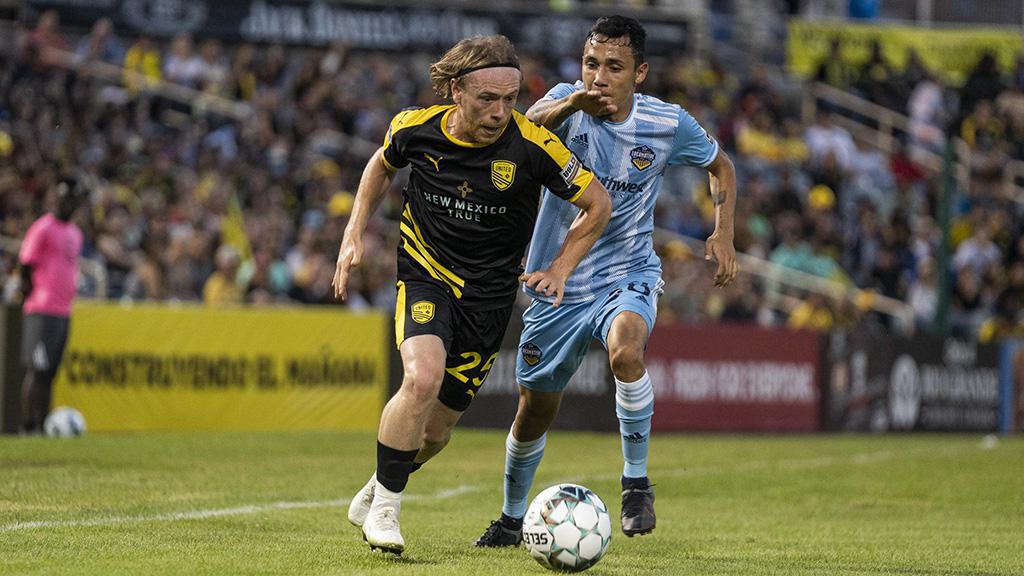 ALBUQUERQUE, N.M. – Both teams had chances, including an effort off the woodwork by Josh Suggs for the hosts, but New Mexico United and El Paso Locomotive FC finished all square in a 0-0 draw before a season-high crowd of 10,303 fans at Isotopes Park as New Mexico finished the game with 10 men.

There was little to separate the sides early in the contest as clear chances proved difficult to come by, but New Mexico got an opportunity in the 22nd minute as Ilija Ilic blocked an attempt to send the ball upfield by El Paso’s Yuma and broke forward toward the top of the penalty area, only to send his finish well high and wide of the target.

Locomotive FC came into the game more as the first half wore on, and after Diego Luna was flagged for offside as the visitors tried to spring him with a ball over the top in the 33rd minute, El Paso’s Louis Herrera fired a curling shot from 25 yards that forced a tidy low save by United goalkeeper Alex Tambakis to keep the game scoreless at the halftime break.

El Paso threatened again four minutes into the second half as Luis Solignac got into the left side of the penalty area but saw his opportunity denied by New Mexico’s Kalen Ryden, who timed a sliding challenge perfectly to take the ball off his foot as he shaped to shoot, sending it behind for a corner. Ilic then made a beautiful move to create space as he navigated past a defender, opening up room for a shot from the top-right edge of the penalty area that was saved by El Paso’s Logan Ketterer in the 55th minute

The visitors continued to look dangerous as just past the hour-mark Sebastian Velasquez lifted a great pass into the right side of the penalty area for Luna, whose shot was blocked away well by New Mexico’s Austin Yearwood. Two minutes later a clever set piece by New Mexico almost produced the breakthrough as Juan Pablo Guzman found a streaking Suggs as he moved into the right side of the penalty area having initially been over the free kick 40 yards from goal, but the United captain’s finish was tipped onto the right post by Ketterer and caromed away to safety.

New Mexico was reduced to 10 men moments later, though, as Guzman was shown his second yellow card of the contest. Locomotive looked to take advantage and with 19 minutes to go Velasquez threaded a pass for Solignac into the right side of the penalty area but the Argentine’s shot didn’t have enough purchase to seriously trouble Tambakis. The visitors also had a chance in the final minute but Josue Aaron Gomez pulled his shot from the left side of the penalty area wide of the near post.

The hosts had one final chance to grab victory deep in stoppage time after being awarded a free kick 25 yards from goal, but Brian Brown’s shot sailed just over the crossbar. Moments later, the final whistle arrived leaving the two rivals to share the points.

Sebastian Velasquez, El Paso Locomotive FC – Velasquez was in the middle of much of El Paso’s attacking promise, recording two key passes and completing 28 of 34 passes overall while also winning 11 of 20 duels in a hard-fought contest.