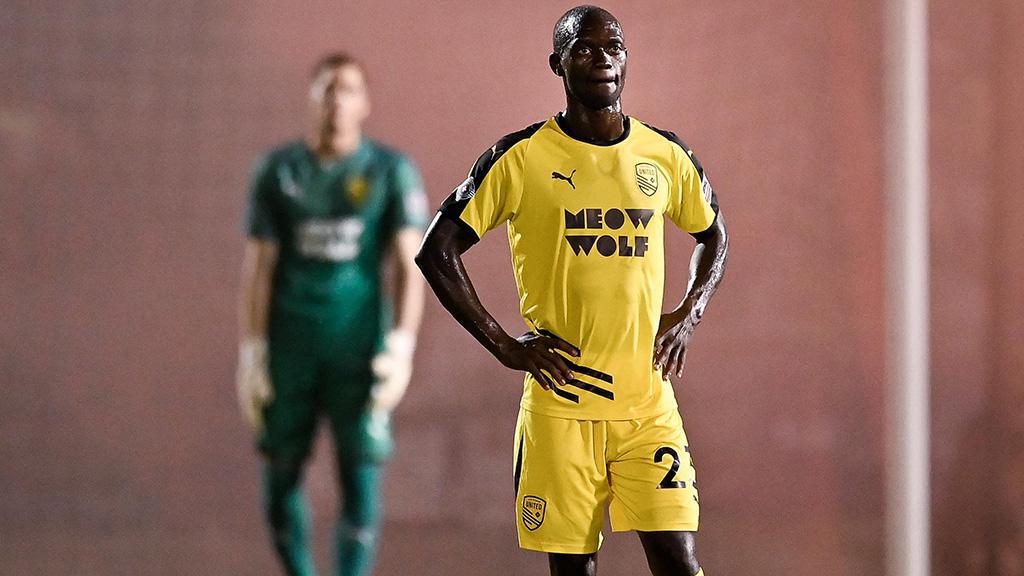 A series of high-profile rivalry clashes highlight Saturday night’s slate in the USL Championship’s Western Conference this weekend with a trio of must-see games across three different time zones to take in during a busy weekend of action. Here are five things to watch for as the games unfold.

There was a lot to absorb for New Mexico United after Wednesday night’s 3-0 defeat to San Antonio FC, which served as a fourth consecutive road defeat for the side, but maybe the most important was the need for a more aggressive stance during upcoming contests. With a third meeting of the season against rival El Paso Locomotive FC coming up on Saturday night at Isotopes Park, it is a message that United will want to take to heart quickly in one of the biggest games of the weekend.

“San Antonio was more aggressive than we were, was on the front foot more than we were and won more duels,” New Mexico Head Coach Troy Lesesne told the Albuquerque Journal’s Ken Sickenger on Wednesday night. “That can’t happen on the road. It can’t happen anywhere. We’ve got to be better than that.”

If there’s a positive for New Mexico to take, it’s that despite its recent road woes the side has become formidable once again on its home turf. United has won three games in a row at The Lab and has only lost once this season in six games overall, which has been key to the side’s current third-place position in the Mountain Division standings. After seeing a halftime lead overturned when it visited El Paso last on July 3 when Dylan Mares scored twice for the hosts at Southwest University Park in quick succession early in the second half, the change of venue – where New Mexico took a 3-0 victory in the lone prior game in Albuquerque in the series in 2019 – could provide the added energy the side needs to earn what would be a significant win.

“We have to stick together and rise to the occasion,” Lesesne told Sickenger. “I’m 100 percent confident that we’ll do that.”

You could probably hear the exhale of relief from Cashman Field’s sidelines last Wednesday night when Sacramento Republic FC closed out a 2-1 victory against Las Vegas Lights FC to end the longest winless streak in the club’s eight-season history. Now as the side returns to action on Saturday night against Orange County SC at Championship Soccer Stadium, though, the visitors are going to have to prove that wasn’t a false dawn as it faces a side also looking to get things back on track itself after back-to-back defeats last week.

Sacramento has struggled with Orange County so far this season, suffering defeats in each of their prior three meetings – a 1-0 defeat that began its winless run on May 22, followed by a 3-1 loss at Heart Health Park on June 5 and a 2-0 defeat at home on July 10 that continued the frustration. Orange County is also set to have its leading scorer back in the fold with Ronaldo Damus and Haiti having been eliminated in the group stage of the 2021 Concacaf Gold Cup last weekend, giving Republic FC’s back line something else to contend with.

If the side is looking for a spark, though, it may be able to look to Tucker Bone, who scored both goals against Las Vegas and now has five for the season overall to lead the side. With another full-on performance needed, the former Sacramento United youth player can be certain to lead the way in terms of positive energy.

“That’s a habit I’ve picked up over the years for sure,” Bone told the Sacramento Bee’s James Patrick this week. “If you’re in the vicinity of the ball and able to pick up the ball, my instinct switches like that. It goes from trying to create space and being tactical to, when the play is around you and you have a chance to impact the team, it goes 0 to 100 real quick.” 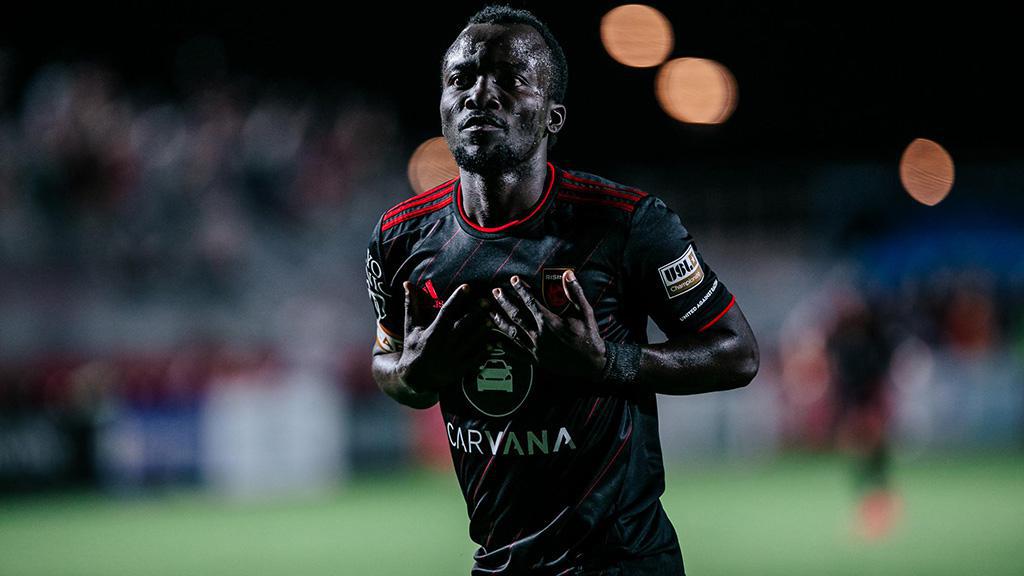 Solomon Asante is set to make his 100th appearance for Phoenix Rising FC in the USL Championship across the regular season and postseason on Saturday night in San Diego. | Photo courtesy Ashley Orellana / Phoenix Rising FC

Two-time USL Championship MVP Solomon Asante is set to make his 100th appearance in the USL Championship across the regular season and playoffs for Phoenix Rising FC this Saturday night as the side visits San Diego Loyal SC at Torero Stadium in another high-profile matchup, and in the build-up his teammates have been paying tribute to the player who has been the most important to the club’s success since he arrived prior to the 2018 USL Championship season.

Asante has made 90 regular season appearances for the side and has recorded 49 goals and 40 assists in that span after last weekend’s one goal, three assist performance against the LA Galaxy II that earned him another Championship Player of the Week award. Overall, the 31-year-old has averaged 1.04 goals + assists per 90 minutes in the regular season for his career, while adding three more goals in nine playoff appearances to help Rising FC to a pair of Western Conference Titles in the past three seasons. What’s been as important as his production on the field for Rising FC Head Coach Rick Schantz, though, is the experience and leadership he has shown in the locker room, taking the captain’s armband while being a model professional week-in and week-out.

“I think it was the sign of a true leader,” Schantz told the Arizona Republic’s Theo Mackie this week. “Solo's not just the captain, he's a leader, and he leads by being a good servant to the club and a good servant to his teammates. He leads by example, he builds good relationships in the locker room and now he's leading in a way that at his age, he's showing that physically, he's still capable of doing the things that we want him to do.”

Two of the better defensive teams in the Championship will square off on Saturday night as Rio Grande Valley FC hosts Austin Bold FC in a Copa Tejas clash at H-E-B Park, and while for the Toros the defensive side of the game has been a key element in its rise to a share of the lead in the Mountain Division this season, for Bold FC it’s been central to the club finding its way to the playoff places one-third of the way through its campaign.

Bold FC has conceded only once in its past four outings – picking up eight points over that span – as goalkeeper Elliot Panicco has moved into the league lead with six shutouts and a remarkable 0.40 goals-against average as the club’s starter. That has helped buffer an attack that has shown positives in fits and starts but has still only recorded 12 goals in 12 games this season with a shot conversion rate of 12.9 percent, putting it 22nd in the league in that category.

Austin has taken four points from its prior to contests with RGVFC this season, including a dramatic 2-1 victory on June 16 that served as the first home defeat for the Toros in the 2021 campaign. Bold FC’s defense will be looking to remain airtight as it heads back this weekend with the aim of keeping its position above the playoff line.

Friday night’s interconference contest that sees Colorado Springs Switchbacks FC play host to Louisville City FC at Weidner Field has the potential to be one of the most entertaining of the weekend, with two of the league’s top three attacks set to square off. There are also a handful of storylines in the background, most notably Colorado Springs’ Hadji Barry and his current pursuit of Louisville City FC forward Cameron Lancaster’s single-season goals record of 25 tallies in the 2018 season.

In addition to that, though, is Switchbacks Head Coach Brendan Burke’s prior experience both as an opposing Head Coach against LouCity during his time at the Philadelphia Union II and as an assistant coach for the Union, where current Louisville interim Head Coach Danny Cruz was a player while Burke served as assistant to John Hackworth, who departed LouCity earlier this season.

“Danny Cruz was one of our players in Philly at that time and I have big respect for Danny too,” said Burke this week. “Danny is carrying on what Hack left off in Louisville and we know that if we make a mistake, we’ll get punished, so this week we’ll focus a lot on the defensive side.”

Burke’s young charges in Philadelphia only claimed victory once against Louisville during his time there, and also suffered a pair of playoff eliminations in 2017 and 2018. With a more experienced group now at his disposal, he’ll be looking to get the upper hand on Cruz in a key home contest for the side in the bigger picture.