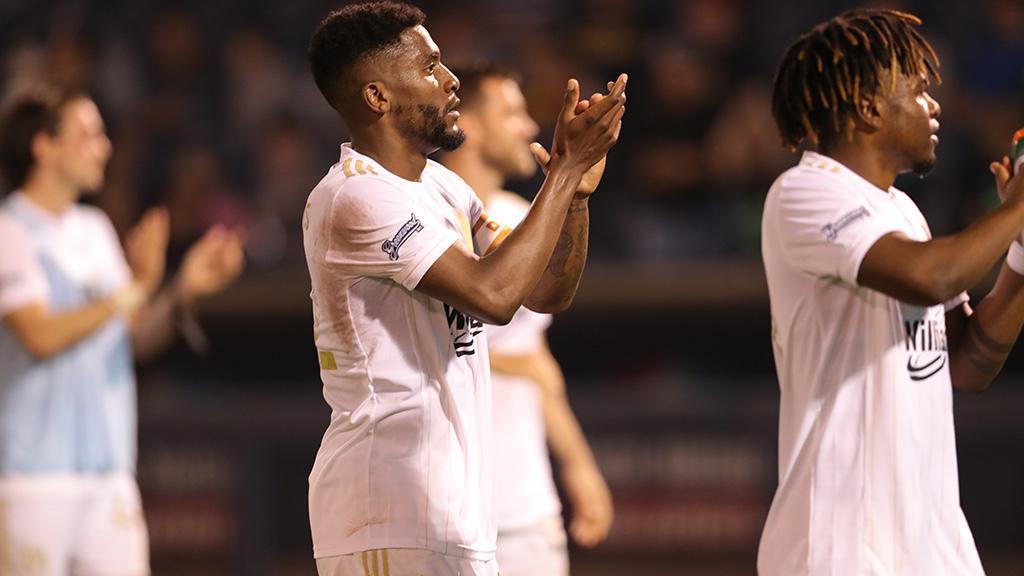 FC Tulsa captain Bradley Bourgeois could make his first appearance in more than a month on Saturday after an injury setback saw him absent on the field but still trying to help his team along recently. | Photo courtesy FC Tulsa

Action in the USL Championship’s Eastern Conference kicks off on Friday night with a major rivalry and intriguing interconference clash before some key games on Saturday night in both the Atlantic and Central Divisions. Here are five things to watch for over the next two nights.

For the first time in more than a month, FC Tulsa could see Bradley Bourgeois back in action on Saturday night as the side heads to visit Memphis 901 FC at AutoZone Park with the veteran defender having returned to full training most of this week after being sidelined with a leg injury since the club’s 4-3 victory against Sporting Kansas City II on June 16. As the club’s captain, his presence could add a positive boost as the side looks to rebound from its loss to rival OKC Energy FC in its most recent outing, but Bourgeois has also been trying to do what he can as a resource watching from the sidelines while he’s been away from the action.

“I have a different perspective on the game not being on the field,” he said this week. “I am able to watch it up in the stands or be at practice or help with film. Just be the eyes and ears for them on the field on what they see, feeding off them and bouncing back ideas back and forth.”

Saturday’s game will be the first meeting between the two clubs, with Tulsa’s move to the Eastern Conference this season having introduced it to a handful of new opponents already. Tulsa Head Coach Michael Nsien is cautious when it comes to 901 FC’s record in sixth place in the standings given some of the performances the side has put in this season – “It’ll be a different challenge than we have had so far this year, but it will definitely be interesting and a fun matchup,” he said – but he is hopeful of potentially having Bourgeois back in action again with the experience and quality he brings to the side.

“I think he is feeling a lot better,” said Nsien. “His mobility looks good, I think just in terms of leadership it’s good to have him back on the field and taking part in the sessions. His quality is still there, he never lets himself go physically, so I think if he is called upon, he will be ready to play.”

Having navigated the two-hour drive south from Conway, S.C. and the campus of Coastal Carolina University to Charleston, recent Battery addition Claudio Repetto – who played for the Chanticleers Men’s Soccer program for the past two falls – has also brought the goalscoring ability he showed at the college level to his first professional stop.

Repetto has scored goals in consecutive games for the Battery, including what proved to be the game-winner last Saturday night in an important 3-1 victory against Hartford Athletic at Patriots Point, and has provided some attacking reinforcement to a side that has been without players like Mauro Cichero through injury and Zeiko Lewis on international duty in recent weeks. Now the Italian striker will get another challenge as Charleston takes on the Charlotte Independence on Friday night looking for a second consecutive win and the chance to jump past its Southern Derby rival in the Atlantic Division.

“I’ve been watching videos [of Charlotte’s matches] and I’ve been seeing they’re very strong in the back, very experienced all over the pitch,” said Repetto, who is set to face the Independence for the first time. “But I go into every game with the same mentality, I worry about myself and the team.”

The Independence have held the upper hand with a pair of 3-0 victories in the prior two meetings between the teams this season, but Battery Head Coach Mike Anhaeuser is hopeful his side has learned from those contests and can assert its game the way it was able to against Hartford.

“When you play somebody a third, fourth time, you really end up knowing them, but we have to pick up the things we’ve gotten caught by,” said Anhaeuser. “[Charlotte] are very good, they have experience defensively, they clog the space. We want to make sure that, just like last game, we want to get that first goal.” 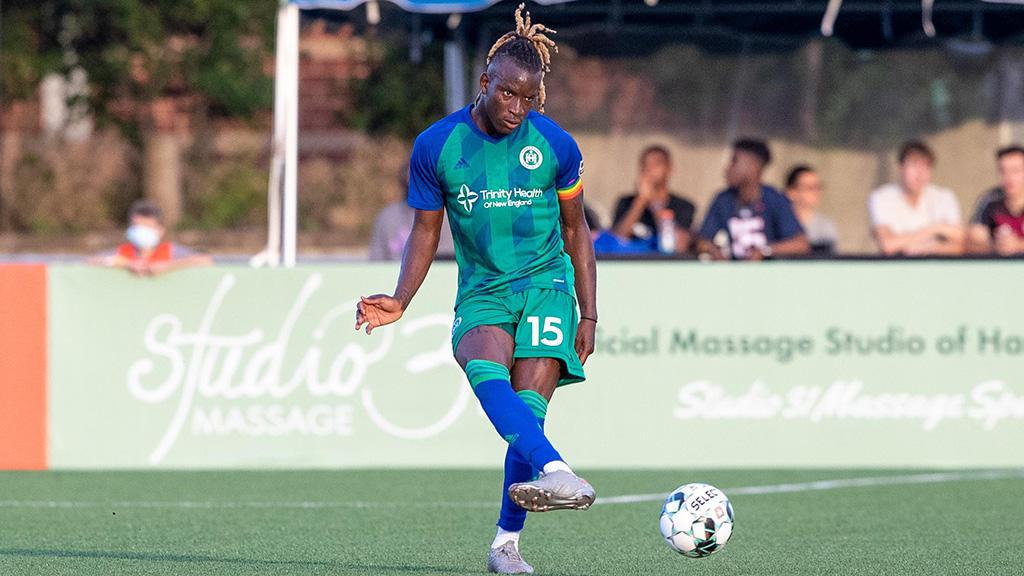 After playing in both North America and Europe, center back Tulu has found a home in the middle of Hartford Athletic's defense, helping the side to a strong opening third of the season. | Photo courtesy Hartford Athletic

Most followers of the USL Championship might know him better as Walid Yacoubou, but the center back with a fascinating backstory – as recounted here by Koby Braunstein – known locally as Tulu has become a key piece of Hartford Athletic’s success this season. The 24-year-old will almost certainly be in the lineup again on Saturday night as Hartford plays host in a key Atlantic Division contest between itself and Miami FC, which has surged up the standings with four wins in its past five games after finally hitting its stride in front of goal.

That’s where Tulu comes in, with his size in the middle of the Athletic’s back line having helped Hartford earn four shutouts in its first 11 games of the season. The Togolese 24-year-old leads Hartford in both clearances (48) and blocked shots (17) while competing alongside more experienced – although not necessarily more well-traveled – counterparts like Thomas Janjigian and Alex Lara and goalkeeper Jeff Caldwell. Facing an attack led by Ariel Martinez, Pierre Da Silva and Christiano Francois that has started to click into gear recently, Hartford needs a bounce-back performance after its 3-1 loss to the Charleston Battery last Saturday night. If it can replicate its 1-0 win against Miami at FIU early this season, it would be another very big step forward for a team that has clear belief in what it’s looking to accomplish each time its steps onto the field.

“Everybody has a different type of hunger and we all want to succeed,” Tulu told Braunstein. “[Head Coach] Harry [Watling] is a great coach and the messages that he puts through our minds fire us up to want to be great.”

OKC Energy FC unveiled a different tactical set-up last Saturday night in its 2-1 victory against FC Tulsa in the Black Gold Derby, and while the change was in some ways necessary after Robert Coronado suffered a fractured foot in the club’s prior outing against Louisville City FC on July 14, according to center back Sam Rogers it was something the team had been starting to work on even prior to the full back’s setback.

“I think it’s something we had talked about for a while now,” said Rogers, who set up on the right side of the formation with Conor Donovan in the center and Mitch Osmond on the left. “With Rob’s injury, it sped up the process a bit, but there are definitely a lot of positives to it. We haven’t had a lot of time to work on it, but you can see the ideas and positive movements that are there. There are still kinks to work out, but for the most part, it will work well for us and the guys we have going forward.”

Energy FC has made a major move up the Central Division’s standings in recent weeks, winning four of its last six outings after Hiroki Kurimoto’s dramatic winner at ONEOK Field to move into the fourth and final playoff place in the standings. Now OKC is looking to bring that positive momentum home as it takes on Sporting Kansas City II on Saturday night at Taft Stadium with an aim to create separation between itself and the teams below the playoff line.

“I think everyone is feeling great,” said Rogers. “Letting that late goal in was depleting, but the late winner was well deserved because we were the better team. It was a great feeling knowing that the hard work and effort resulted in three points. Everyone is buzzing.”

One of the noticeable trends for Indy Eleven as the tenure of former Head Coach Martin Rennie came to a close last month was a downturn in the attacking production in the side, where ideas and chances in the final third became harder to come by, especially when facing teams toward the top of their respective divisions. Over their first eight games of the season, the Boys in Blue average only a 1.12xG per game as the season took a downward turn after a promising early start.

Things have started to improve in that area – in the five official games since interim Head Coach Max Rogers took the helm the side is now averaging 1.61xG per game – but it hasn’t quite produced the results the club has been looking for yet. In comparison to OKC Energy FC – which also made an early coaching change this season, Indy has stayed in the middle of the playoff race in the Central Division with three draws in its past four games after victory at Sporting Kansas City II in Rogers’ first game in charge but has been usurped for fourth place by Energy FC’s which has won four of its last six.

It’s that contrast that in some ways serves as the backdrop for the Boys in Blue on Saturday night as Birmingham Legion FC comes to Michael A. Carroll Stadium for the third meeting between the teams this season. Sitting in second place in the Central Division, Birmingham earned a hard-fought 1-0 road victory behind a goal from Neco Brett when the sides last met on July 3 in a game that saw Indy have chances but fail to put them away. Finding that scoring touch this time around is going to be key to get the club’s season pointed upward instead of sitting flat.