We caught up with the English midfielder about moving San Diego, longer-term deals, and matching up to Phoenix 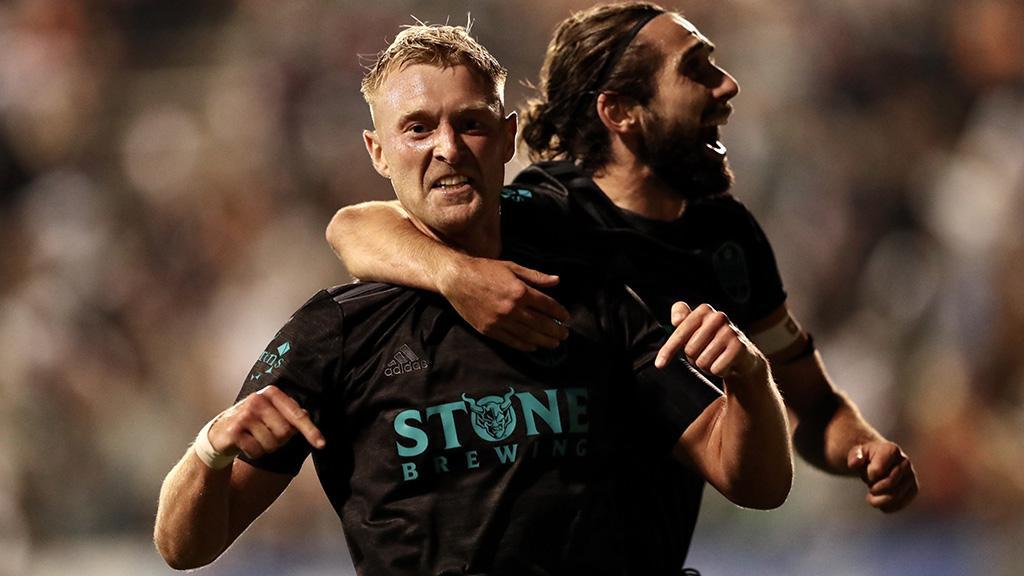 English midfielder Jack Blake has become one of the USL Championship’s best-liked players, both at prior stops with the Tampa Bay Rowdies and Real Monarchs SLC – where he captained the side to the 2019 USL Championship Title – and more recently with San Diego Loyal SC, where he is currently midway through his first season and sits as the side’s leading scorer with four goals.

Blake this week signed a new contract extension that will keep him with SD Loyal through at least the 2023 USL Championship season. The 27-year-old’s deal follows other previously announced mid-season re-signings that have taken on added prominence this year as clubs look to secure key building blocks for their on-field success.

Ahead of this Saturday’s game with Phoenix Rising FC at Torero Stadium (10:30 p.m. ET | ESPN+), we caught up with Blake to discuss his new surroundings in San Diego, what it says about the Championship that more players are getting longer-term deals from clubs – and what that means for the league in the future – and how SD Loyal is looking to take on Rising FC and become a perennial title contender in its own right.

Q: First of all, congratulations on the new deal, how reassuring is it to know you’ve got at least two more seasons with San Diego Loyal SC ahead of you after this campaign?

Jack Blake: I think honestly, it’s a project that the club have been building since they started, and the project is being a club that people look up to, where people want to be a club like that. To be part of a team like that who strives for success and strives to be the best at everything, I want to be a part of that for the long-term, I want to be part of a team that values not only success on the field but success off the field. San Diego Loyal definitely does that.

Q: What have you enjoyed most about getting set up in San Diego, not just at the club but the city as well?

JB: The city speaks for itself. It’s a fantastic place to live, it’s a fantastic place to raise a family and we’re really lucky and fortunate to be able to live in a place like this. The beaches are phenomenal, the quality of life over here is fantastic. [The contract extension] was an easy decision for me because my family love it here, I love it here, the fanbase is incredible. Connecting with the fans at every game and speaking with them online, the support that they have for us is another big factor to why I did re-sign.

Q: This year there have been a few notable mid-season contract extensions, including your former teammate Kalen Ryden in New Mexico and Hadji Barry a couple of weeks ago in Colorado Springs. Is this a sign of the way things are changing in some ways for players in the Championship?

JB: Definitely. I think the league has come a long way in the last five years and I think for it to really challenge other leagues, especially in Europe, long-term contracts have to be a thing for players to feel security for the teams to believe they can really plan forward for the future and know the players are going to be there for a number of years. I think it really does help the league grow and teams become stronger and individual players get that recognition but also have that security that they can continue to play at the same team and build something at one club.

Nothing but immaculate vibes in the 619 tonight. #Loyal619 pic.twitter.com/YV03BXoB8s

Q: There have always been players who’ve stayed long-term with clubs – thinking about guys like Kevin Kerr with Pittsburgh or Jordan Burt right now with Colorado Springs – but it feels like nowadays there are more of them who’ve found their ideal fit in terms of the deal they can get and a club they like being part of. Is that a sign that the Championship and its clubs are improving in terms of the stability they can offer players?

JB: Yeah, I think as well when you look at a team like Colorado Springs that have a new stadium, teams in the league now are proper teams with proper stadiums, proper training facilities. They take after their players properly and the standard of everything has improved. Players are more likely to stay at teams long-term because they’re happy, they’re in an environment that feels professional, like being in San Diego – not just living in the city of San Diego but being part of a club that does things properly. That definitely affects players and wanting to stay long-term, for sure.

Q: What does that mean for the long-term in terms of the quality on the field the league can offer?

JB: I think the players that have been signing longer-term deals, it attracts guys from other leagues as well. Like I said previously, it can only make the league stronger that people around the league and other players will also want to emulate that and hope that the team they’re playing for can give those out. I think honestly, it can only strengthen the league. Other players and other teams in other leagues will want to start doing the same thing as well. It’s a positive all the way around, a positive for the league, for the player, and for the team.

Q: You guys play Phoenix on Saturday. You had a remarkable outing the last time you played with the two long-range goals in the 2-1 win, what did it feel like to walk off the field after that game with a win?

JB: It was a massive sense of achievement for the team. I was happy with what I did on the field but more importantly we felt as a team we had finally some redemption from our first performance away in Phoenix, when we first played. We had a tough first four games schedule-wise – all of them being on the road and in tough places with Phoenix being the first game – and we didn’t put on the show we wanted to. I think that game against them at home, there was a real sense of achievement for us as a group as to how far we’d come since the start of the season.

For me personally, it was the feeling of helping my teammates and us as a team get out of a rut we were in, and it was almost a sense of relief than anything else. Those nights are special, that’s something I’ll remember for the rest of my life and my career.

Q: You guys have made Torero Stadium a very difficult place to come and play so far this year. What is it like walking onto the field with the support you have and the belief you can play with anybody, you can beat anybody on your home turf?

JB: I think a lot of us realized that especially the first eight games, seven of them were away, so we felt not a lack of support, but it’s difficult to go to Louisville, it’s difficult to go to Phoenix, and when you don’t have a home crowd in the hostile environments that you’re in. When we came back home, it was how do we make it like that, how do we use the strong and powerful fanbase that we have, and they showed up.

The fans showed up for us, and I think you can see that in the performances we’ve had this year, especially that [Orange County] game just gone, down a man, we then concede a goal but we still come back to win, and I think the fanbase, everything we have here, it sets the team up for success. 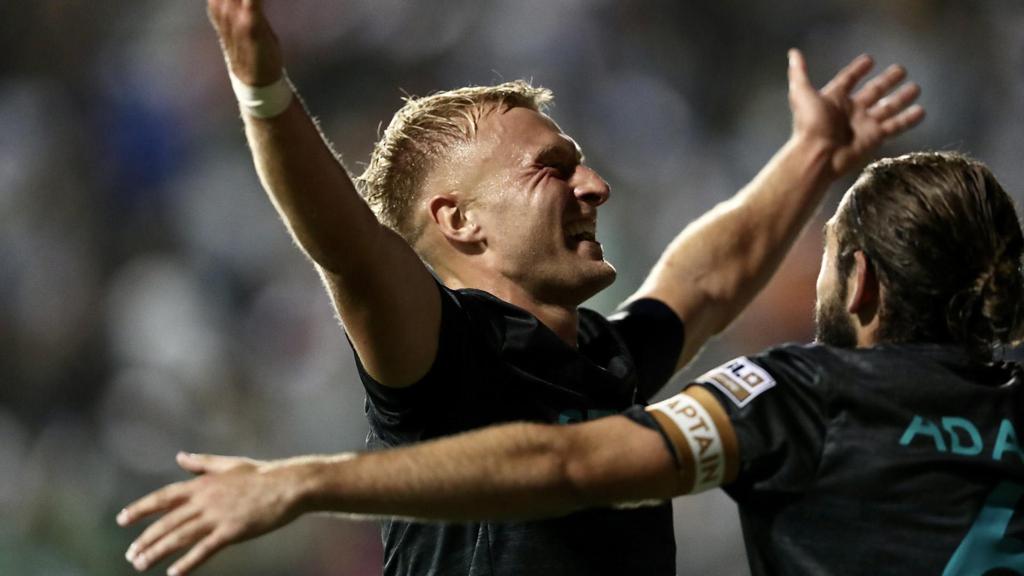 Q: Rising FC has been among the title favorites consistently for the past four seasons, how close do you think San Diego is to getting into that position where every preseason you’re a team people will be looking at as a serious contender for silverware?

JB: I think the biggest compliment we’re being paid right now is teams are trying to stop us playing, teams are adjusting their tactics to us. I think you could see that when Phoenix played us last time, and we’ll see that again this Saturday. I think that’s the biggest compliment of our team at the moment and in the future all we can continue to do what we’re doing, continue our style of play, the philosophy that we have, the attitude that we go into every game with, and I think if we can consistently do that then, yeah, for sure, we’ll be a massive contender for years to come.

Q: What’s the most important thing you and the team needs to do on Saturday night to earn a victory?

JB: Good question. I think this weekend we’re going to have to go in with a front-foot mentality and not let our foot off the gas. It can be easy to go in – especially after picking up the fair few wins we have recently – a bit tentative. I think if we do that, we’re setting ourselves up to fail. We have to go into this game on the front foot, feeling positive, feeling confident, and all the performances we’ve been putting in just keep consistently doing the same things.