After challenging start to 2021, 19-year-old’s prodigious talent was on full display in win vs. New Mexico 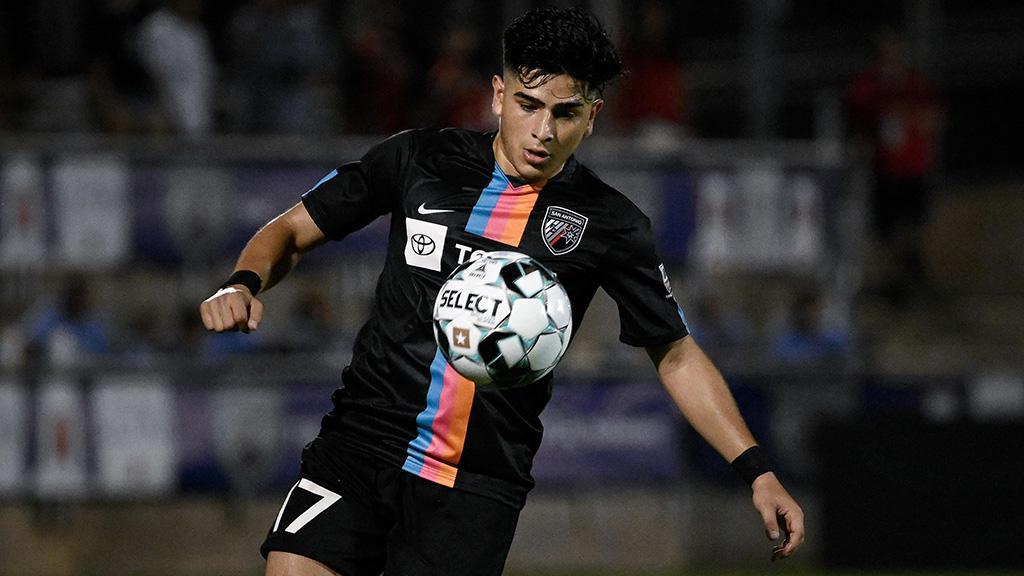 SAN ANTONIO – It would be fair to say the season up until Wednesday night had been a frustrating one for San Antonio FC’s Jose Gallegos.

The 19-year-old, last year a finalist for the Championship’s Young Player of the Year award, trained with Bundesliga giant Bayern Munich for two weeks in the past offseason and was also linked with other top clubs in Europe. So far this season though, he just hadn’t quite found his rhythm, starting only seven of the side’s opening 12 games and appearing as a substitute in two more as early-season knocks kept him from his best.

And while there had been signs that things were starting to click into place – for example in San Antonio’s 3-2 victory against Colorado Springs Switchbacks FC last Saturday afternoon – we had yet to see his prodigious ability fully unleashed in 2021.

After Wednesday night, that’s no longer the case.

In concert with Nathan Fogaca – himself now starting to flourish after a checkered start to the season – Gallegos took to the national stage on ESPN2 at Toyota Field in front of not only fans but executives from across the league attending the USL Mid-Year Meetings and made it his own personal show. Two beautifully laid on assists that set up Fogaca for his second consecutive two-goal outing and Gallegos’ own first goal of the season to wrap up proceedings in a 3-0 victory against New Mexico United showed just why he is such a highly regarded young prospect.

“I felt really good,” Gallegos said after the game. “The team worked really hard for me to have that performance, so all credit goes to them, but overall, I'm just happy with the collective performance today.”

Getting into both the goal and assist column for the first time this season will likely be a burden removed moving forward, but what shone more than the numbers was the touch, control and movement that Gallegos displayed throughout the night. Using his frame to hold off or shift past defenders while positioning his touches to allow delivery of the right pass at the right time, the higher level that was on show consistently during a breakout first professional season in 2020 was back.

It appeared first midway through the first half as he controlled while turning into space, moving upfield and quickly lacing a through-ball for Fogaca the Brazilian couldn’t take advantage of, but then even more so as the game progressed. The precision of the delivery on both assists was pinpoint, putting the ball where only his teammate would get it each time, setting up the hosts for their best performance since the opening night of the season.

“Jose has been performing, and he executed today with his final actions,” said SAFC Head Coach Alen Marcina.

That has effectively been the story for not just Gallegos but San Antonio over its past two games. While the side had found ways to earn points with five draws in a seven-game winless streak prior to Saturday’s win against the Switchbacks, the execution in the final third hadn’t been up to par. With six goals in the past two games overall and Fogaca and Gallegos starting to show a serious understanding in the final third, the battle for a place in the USL Championship Playoffs in a devilishly difficult Mountain Division has now been joined.

“Believing in ourselves and in our game plan all the way through has been paying off lately,” said Gallegos. “We just have to keep going and keep the momentum going.”

As he wheeled away after his first goal of the season, a broad smile on his face as he went to celebrate with his teammates having secured all three points, it felt like the turning point of Gallegos’ season had also finally arrived.