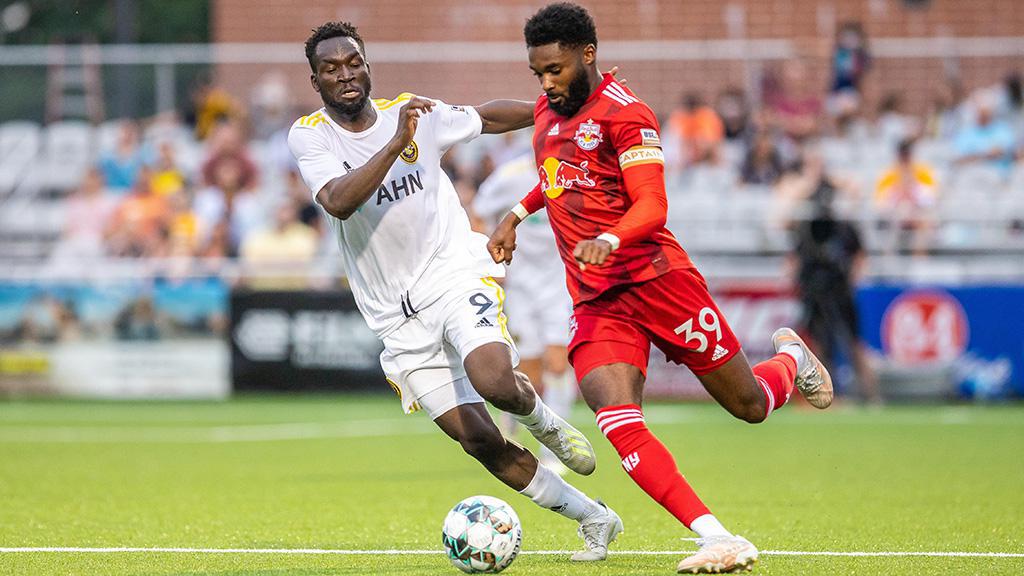 MONTCLAIR, N.J. – The New York Red Bulls II and Pittsburgh Riverhounds SC each enter their third meeting of the season on three-game undefeated streaks, but after having claimed victory in their prior two contests the Hounds will be hoping to take top spot in the Atlantic Division at MSU Soccer Park on Friday night. Kickoff is scheduled for 7 p.m. ET.

@NYRBII (3-6-4, 13pts) will return to action on Friday night after its most recent contest with the Charlotte Independence – scheduled for this past Saturday – was postponed, but the side had built some positive attacking momentum with five goals in its prior two outings. A late red card to Emir Tombul preceded a disappointing finish as the side let a two-goal lead slip in a 2-2 draw with Hartford Athletic at Dillon Stadium on July 10, but Omar Sowe has recorded goals in back-to-back games while others like Jeremy Rafanello and Jake LaCava are also starting to find the net as well, with all three now sitting on three goals apiece this season. New York will be hoping to put on a better showing at home on Friday, though, with the side having won only once in seven games at MSU Soccer Park so far this season.

@RiverhoundsSC (7-4-3, 24pts) has won two of its past three outings, meanwhile, but Head Coach Bob Lilley was disappointed with what he considered a sub-par performance in a 1-0 win against Loudoun United FC last Saturday night at Highmark Stadium. Russell Cicerone notched the only goal of the game for his sixth tally overall this season, a new individual single-season high for the 26-year-old who recorded five goals in each of the past two seasons in the league. Cicerone was on target when Pittsburgh last visited MSU Soccer Park on May 28 in a 3-0 victory that also saw Danny Griffin and Alex Dixon find the net, while Todd Wharton and Albert Dikwa scored in a more recent 2-1 win in Pittsburgh on June 25. The Hounds have won four games in a row overall against the Red Bulls II, with New York’s most recent win in the series coming on July 26, 2020 after a late penalty kick by Deri Corfe lifted the hosts to victory at Red Bull Arena.