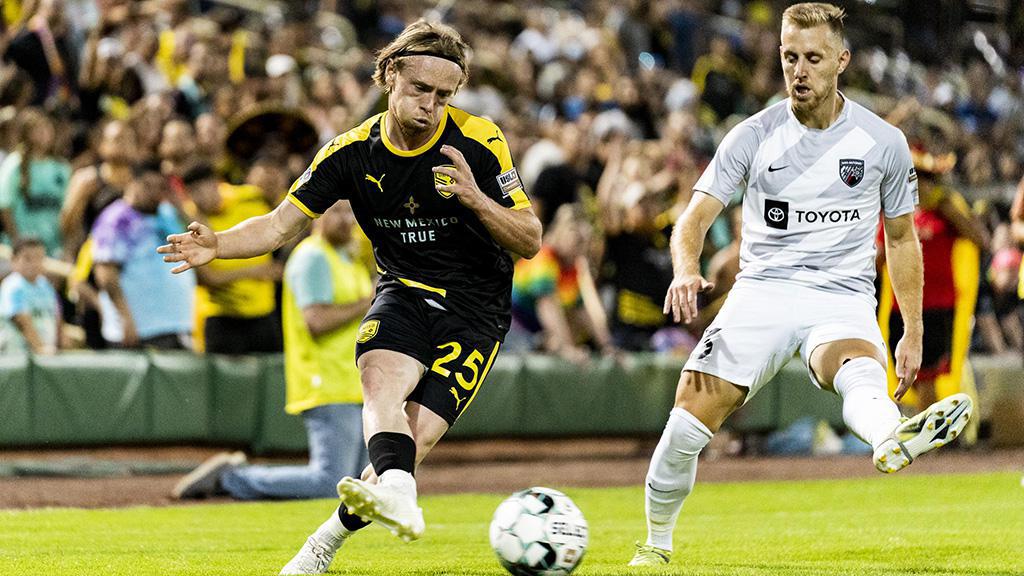 New Mexico United and Daniel Bruce took a 2-0 victory against San Antonio FC when the sides first met this season on June 16 at Isotopes Park, with the teams set to square off again on Wednesday in the USL on ESPN Game of the Week. | Photo courtesy Josh L

SAN ANTONIO – San Antonio FC plays host to New Mexico United on Wednesday night in the USL on ESPN Game of the Week at Toyota Field with the hosts looking to build on a weekend victory against a United side that held the upper hand when the sides first met this season. Kickoff is scheduled for 9:30 p.m. ET on ESPN2.

@SanAntonioFC (3-3-6, 15pts) snapped a seven-game winless streak on Saturday afternoon as it took a 3-2 victory against Colorado Springs Switchbacks FC at Weidner Field that saw Nathan Fogaca score twice and Matt Cardone record eight saves as the visitors held on for victory late. The win moved San Antonio within four points of the playoff positions as Week 14 begins, and also marked the return of Brazilian midfielder PC to the lineup for the first time since May after his recovery from injury. Fogaca’s goals were his first for San Antonio, and he could be asked to carry a greater burden for the side in attack moving forward following the club’s announcement that leading scorer Santiago Patino had suffered a stress fracture in his leg prior to the game with Colorado Springs. SAFC also added more midfield depth on Monday with the signing of midfielder Mohammed Abu, who has previously competed for Ghana’s Men’s National Team as well as in top flight leagues in Europe and Major League Soccer.

@NewMexicoUTD (6-5-2, 20pts) sits in third place in the Mountain Division after claiming consecutive victories at home in its two most recent outings. New Mexico took a 2-1 victory in an interconference clash with the Charleston Battery on July 12 in its most recent contest as defender Kalen Ryden and forward Devon Sandoval each found the net. United will continue to be without forward Amando Moreno as he helped El Salvador claim a place in the knockout stage of the 2021 Concacaf Gold Cup, making a pair of appearances in the group stage. New Mexico claimed a 2-0 victory when it first met San Antonio this season at Isotopes Park on June 16 when Josh Suggs and Austin Yearwood each found the net and goalkeeper Alex Tambakis recorded a three-save shutout. San Antonio held the edge in total shots (14-12) and shots inside the penalty area (12-6) in that contest, however, and will be hoping it can find some sharper finishing this time around in what is shaping up to be a highly competitive race for the playoffs among the Mountain Division’s top six teams.