Asante continues to dominate vs. Los Dos; Toros get early lead, put on the clamps in Orange County 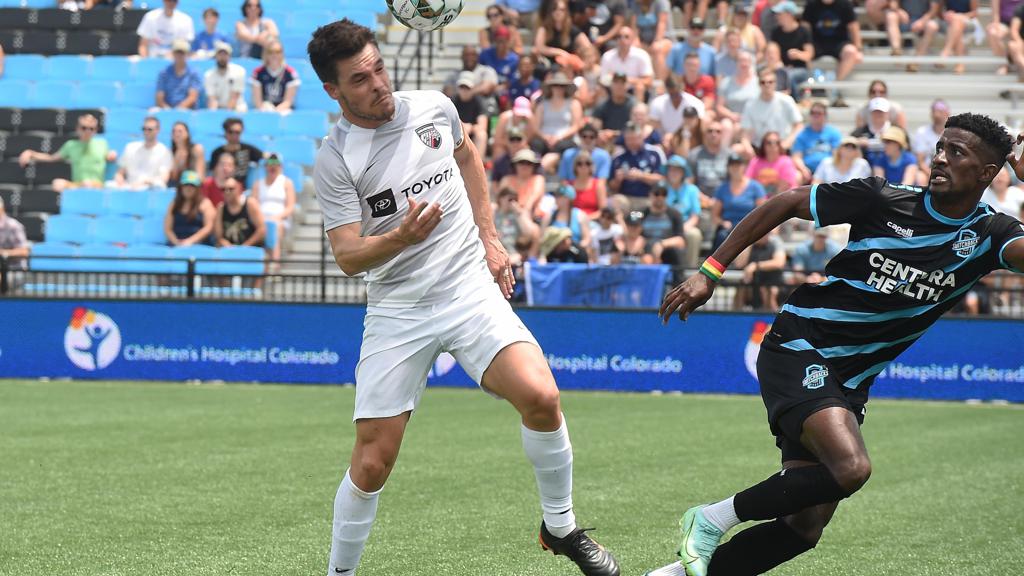 The Western Conference action in the Championship this past weekend produced some high-flying action, and some lockdown performances that continued to shape the top of both the Mountain and Pacific Divisions. Here are five takeaways from the conclusion to Week 13.

It can be dangerous to attribute any team success to one individual, but it certainly bears mentioning that as PC returned to San Antonio FC’s starting lineup for the first time since May 29 the side’s lengthy winless streak also came to an end. The club’s Brazilian captain went 57 minutes in his first game back from injury and made a sizeable impact in a 3-2 victory for SAFC against Colorado Springs Switchbacks FC that also served as the club’s first road win of the 2021 campaign and first three-goal performance since the opening game of the season.

“I'm happy to be back and get the three points, and I'm proud because we showed our team identity again,” said PC, who helped set a time in winning 6 of 7 duels, 3 of 4 tackles and making five recoveries and San Antonio’s high pressure early in the game helped its gain control of the contest during the first half. “I spoke with the guys before the game and talked about how we showed that identity in our first game of the season and we needed to do it again. The game got a little difficult in the end, but we got the result and the three points.”

That first game of the season had also come against the Switchbacks, a 3-0 victory at Toyota Field that did not see the more fully-formed side now playing at Weidner Field. As hard as Colorado Springs pushed for an equalizer in the second half, finishing the game with 20 shots and 10 on target which forced goalkeeper Matt Cardone into a superb individual display with eight saves, the visitors held on to give their confidence a significant boost.

“It was a very important win for us, as well as to score three goals against a very good and organized team who has some of the best attackers,” said SAFC Head Coach Alen Marcina. “We felt as a collective that our pressing actions were very good, particularly in the first half. We had moments we have to be better at, and we have to continue to press teams for 90-plus minutes.”

You have to figure at this point, whenever the LA Galaxy II look up at the schedule and see Phoenix Rising FC’s logo the visions of Solomon Asante start to flicker through their minds. There have been some players for whom some teams have been a favorite to play against, but nothing quite like what we’ve seen from the Ghanaian playmaker, who keyed another victory for Phoenix against Los Dos to the tune of a goal and three assists in a 5-0 result on Saturday night.

Asante has now recorded seven goals and eight assists in nine all-time appearances against the Galaxy II, part of the reason for Phoenix’s current 12-game winning streak in the regular-season series between the sides. While the hosts made a slower start than in some games this season, as Head Coach Rick Schantz put it after the game, “With Solo Asante on the field, you know something good is going to happen.”

That may have been shown most by his final act of the night, a deft first-time pass on the turn that released David Egbo into the Los Dos half alone, where he notched his second goal of the night. Asante saw the finish from 70 yards away, having been hauled down by a defender after making the pass as he looked to advance, but his work was already done in becoming the third player so far this season to notch a goal and three assists in the same contest. 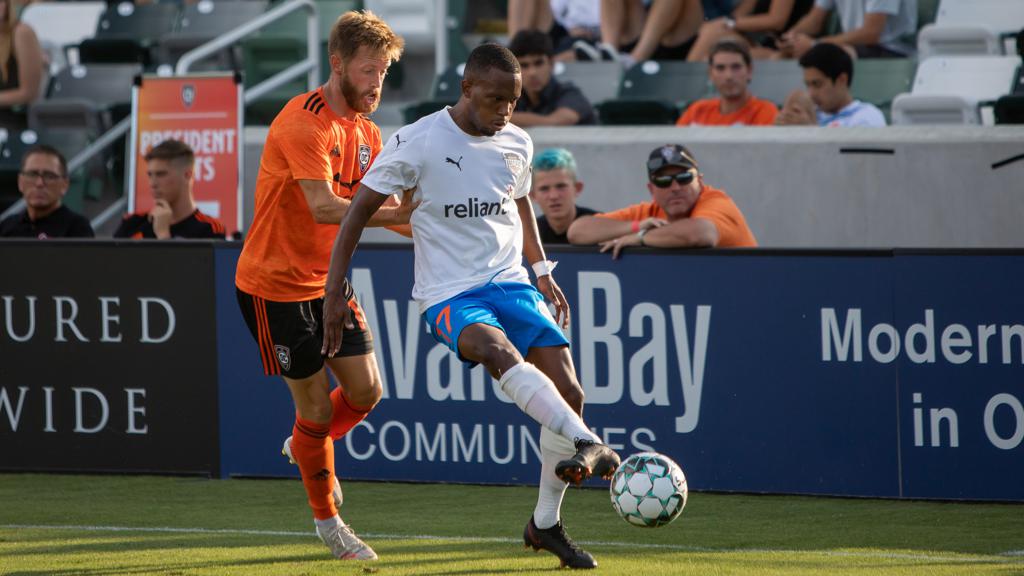 With both teams sitting in the top two in their divisions going in, Saturday night’s contest between the Pacific Division’s Orange County SC and the Mountain Division’s Rio Grande Valley FC was an intriguing one both because of the position of both clubs, but as a barometer for how OCSC would rebound from the end of an eight-game undefeated streak in San Diego in midweek.

As it turns out, the answer was not ideally. The Toros produced a beautifully manufactured goal inside two minutes capped by Wan Kuzain’s low cross that allowed Juan Carlos Azocar to finish, and after that Orange County learned what most teams that have gone behind to RGVFC – it’s a spot you don’t want to be in. The hosts recorded only one shot on goal from inside the penalty area and were held to 0.36xG as the Toros cruised to a 2-0 victory, remaining tied on points with El Paso Locomotive FC as Rodrigo Lopez’s late penalty kick put the game to bed.

The game was another indication of who the Toros are now. They’ve only dropped three points from a winning position this season and have gained six points after trailing – something that hasn’t happened too often with the side having suffered only three defeats this season. In the highly competitive Mountain Division, that’s going to be a very good trait to have.

LOCOMOTIVE FC HITS THE GRIND TO PICK UP VICTORY

One of the essentials to success throughout a season can be an ability to find three points even when the squad isn’t at its best. For El Paso Locomotive FC on Saturday night, that might have been the biggest takeaway from a 1-0 win against Las Vegas Lights FC at Southwest University Park that saw the side have to fight for a breakthrough, and then to hold on as the improving Lights FC lineup looked to grab a point late.

“In many ways [tonight was] very good, and in many ways not so good,” said Locomotive FC Head Coach Mark Lowry. “It’s been a challenging week for everybody. A couple of injuries picked up, a few guys were unavailable, so we saw some changes in the lineup. All in all, an okay performance. Not a complete one, not a great one, but after the week we had, the three points in a really important moment of the season going into a tough stretch of five games in 16 or 17 days, that three points tonight set us up well for that.”

Locomotive FC remained level on points with Rio Grande Valley FC after Saturday’s win, which saw goalkeeper Ben Beaury both pick up his first shutout in the Championship and become the third goalkeeper this season to post a shutout for El Paso after Logan Ketterer and Adrian Zendejas. With a trip to face New Mexico United next Saturday up next – and consecutive weeks with midweek contests to follow that – Lowry’s side is going to be tested, but on Saturday appeared up to the job.

Colorado Springs Switchbacks FC has been one of the most entertaining teams in the Championship this season with the league’s leading goalscorer Hadji Barry adding to his total on Saturday against San Antonio FC at Weidner Field. After a second consecutive performance that saw the side concede three times, though, the challenges the side has faced in finding consistency reared their head once again as the Switchbacks slipped below the playoff line at the end of the weekend’s action.

“The reality is we've lost two games back-to-back because of silly mistakes on our part, not because we can't carry the game or we’re not good enough to push the game, we certainly are,” said Switchbacks Head Coach Brendan Burke. “I haven’t seen the stats yet, but I imagine we created probably 15 good goal scoring chances today between the two halves, we just weren’t sharp enough defensively – and that’s not just on the back four that’s in the midfield as well, we were losing second balls and duels, just stuff we can’t do anywhere but certainly not at home.”

The attacking play is certainly top-level in the league – only Phoenix Rising FC, Louisville City FC and the Tampa Bay Rowdies have produced a higher cumulative Expected Goals mark this season than the Switchbacks – but with LouCity coming to visit Weidner Field on Friday night, Colorado Springs is going to have to be on point defensively to avoid its losing run extending further.