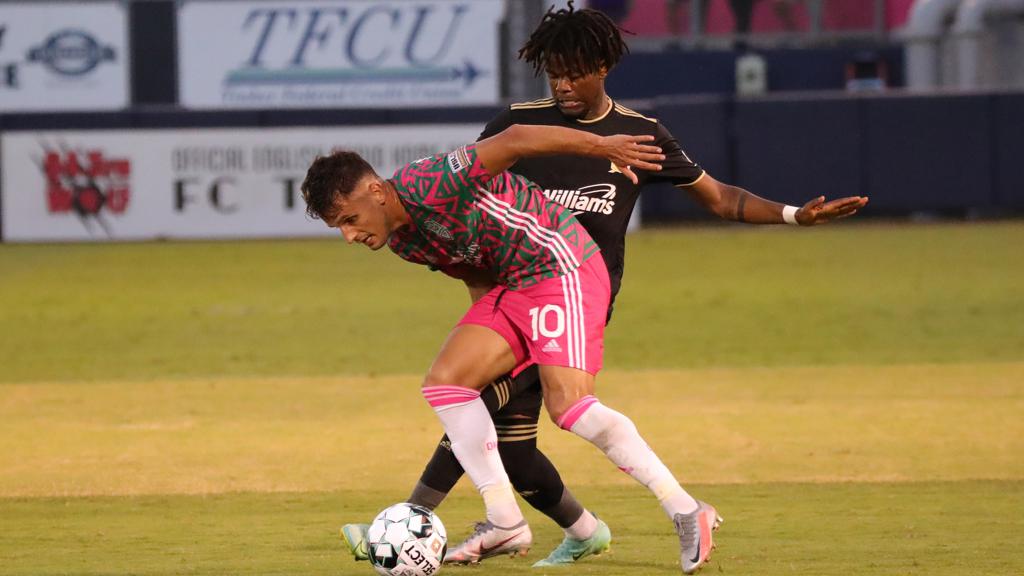 The USL Championship’s Eastern Conference produced plenty of eye-catching performances and results over the past weekend of action. Here are five takeaways from the conclusion of Week 13 of the regular season.

If there was a key element to OKC Energy FC’s game on Saturday night in FC Tulsa, it was the pressure the visitors applied consistently to the Tulsa backline. That pressure paid off in both chances and eventually goals for a 2-1 win that snapped its seven-game winless streak in the Black Gold Derby series, and also moved the side into the playoff positions in the Championship’s Central Division at the end of the weekend.

That pressure led to early turnovers by the Tulsa back line and in turn transitional chances for Energy FC with the hosts short on numbers to cover. While OKC wasn’t able to capitalize during the opening 45 minutes despite close efforts by Villyan Bijev and Jaime Chavez in back-to-back moments, after Frank Lopez was introduced in the 62nd minute it took him only three minutes to produce a scorching finish from 25 yards.

For all Energy FC’s success, though, it looked as though Tulsa might have grabbed a point as the game ticked into stoppage time when Rodrigo da Costa continued his remarkable run of form with a brilliant free kick to level the game. OKC’s transition game paid off again, though, with almost the final kick of the match as Bijev got into space on the left and delivered a cross for trailing midfielder Hiroki Kurimoto, whose volleyed finish sent the visitors and their travelling support into understandably wild celebrations.

“Those chances and those opportunities, when we did counter for those goals, it comes from the quality that we have in the center of the field,” said Energy FC interim Head Coach Leigh Veidman. “That’s really what those goals are about. It’s about getting your best players in the middle of the field, and when you have those players in the middle of the field, they’re the types of goals and they’re the types of chances you can create and that we can create. We didn’t execute on them all tonight, and that’s just the game, that’s just the way it goes, but we’re creating them and thankfully we executed on two big, important chances tonight that got us the three points.”

With Saturday night marking their season becoming one-third complete, there was an added sense of urgency for the Charleston Battery as they played host to Hartford Athletic at Patriots Point with the visitors sitting eight points ahead in the playoff positions in the Atlantic Division. Also adding to that feeling pregame for Battery Head Coach Mike Anhaeuser? The growing crowd that resulted in the biggest crowd the side has hosted at its new home since its arrival, with more than 3,500 fans providing an energetic and intimate atmosphere for a 3-1 win that produced a major boost to Charleston’s season.

“You know, I was sitting out watching warmups and watching the crowd come in, we're getting ready to go out and there's still people walking down the street,” said Anhaeuser. “I'll tell you what, winning 3-1 at home with this many fans is incredible.”

The Battery’s goals were of the sort that should have fans flocking back, too. From birthday boy Romario Piggott opening the scoring with a beautiful curled finish to Claudio Repetto making it two goals in as many games, Charleston recorded its most shots in a game this season, while equaling its marks for goals and shots on target in a game as well. With another key game coming next Friday night against the Charlotte Independence – also on home turf – the Battery will be hoping their upward path to the playoff positions can continue against their Southern Derby rival. 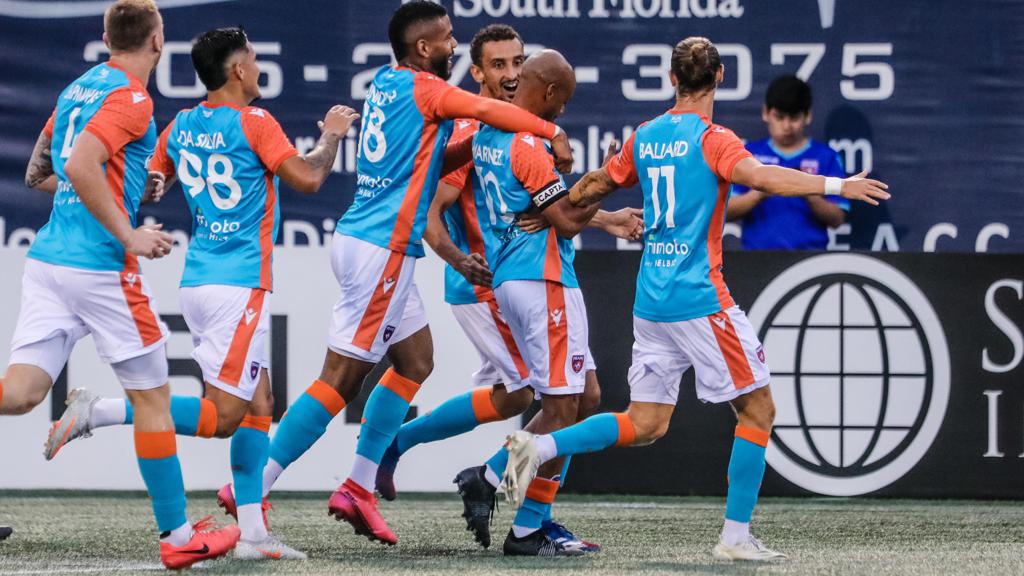 Miami FC took its second consecutive 2-1 victory against in-state rival the Tampa Bay Rowdies on Saturday night to move within a point of the Atlantic Division lead and did so with an impressive efficiency in front of goal that has been notable to the club’s recent upturn in form. Instead of the side that would make numerous chances but fail to finish them early in the season, Miami is now putting finishes away at a much more consistent rate and has won four of five games in the process.

“How we are doing what we do, it’s coming off the training ground and the players are understanding that,” said Miami assistant coach Andy Thompson. “When you’ve got special talents like we have, even when the results weren’t great the performances were good and the players’ standards were always so, so high. That’s what we’ve got to keep doing.”

Miami now ranks in the top five in the Championship in Expected Goals this season (21.75xG) and is now tied for fifth in the league with 21 goals overall, a sign that the early season struggles are now well behind the side as it moves into contention for top spot.

Pittsburgh Riverhounds SC moved level on points with the Tampa Bay Rowdies on Saturday night after a 1-0 victory against Loudoun United FC that saw Russell Cicerone score an early goal for the hosts at Highmark Stadium, but Head Coach Bob Lilley remained unhappy with the lack of progression in the way the team has performed over the course of the season so far.

“We haven’t been good consistently at our top level all year, and it’s why we’ve dropped other points as well,” said Lilley. “It doesn’t matter what we’re doing result-wise if we’re not getting better. Nobody is impenetrable, and we need to get better. I think that’s what’s frustrating – we’re trying to press that on our players, and I’d like to see more intensity from them. I can sugarcoat things, but I told them if we play this way next week in New York, we’ll get hammered. I don’t think we’ve been disciplined enough. We got to be better. We’ve had good moments, but overall, we’ve underperformed.”

The success Lilley has achieved both in the Championship and over the course of his career is testament to the standards that he sets for his sides, but the consistent focus of the process and the product rather than the result might be the biggest reason why Lilley has turned the Hounds into not only a winning side, but a contender over the past three seasons. If Pittsburgh is getting results while not at its best, there could be a whole lot more entertainment – and success – to come from Cicerone, Kenardo Forbes, Alex Dixon and the rest of the Hounds this season.

McLAUGHLIN GETS FIRST LOUCITY MOMENT IN THE SUN 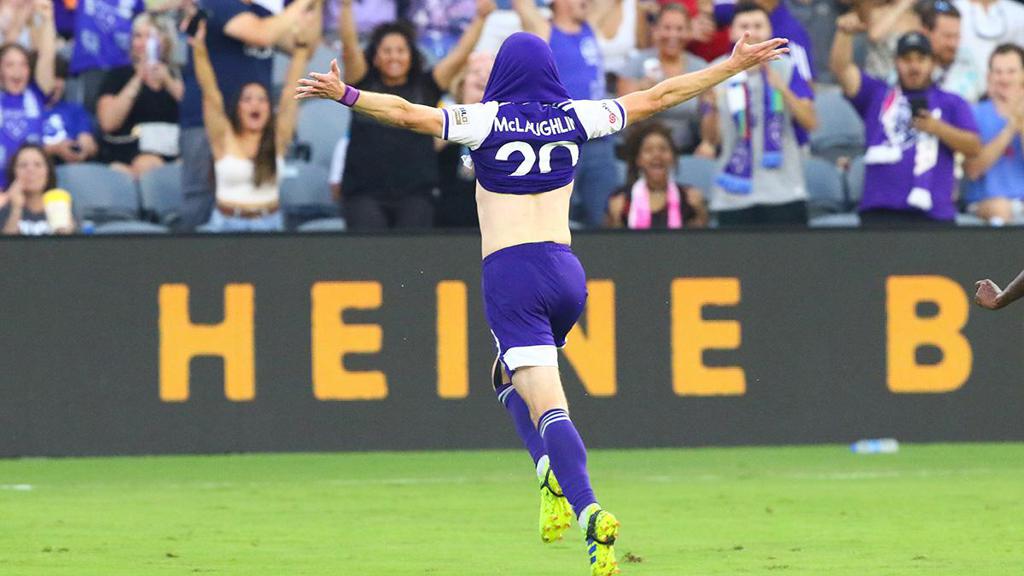 Even for someone with as accomplished a career in the Championship as Jimmy McLaughlin, there was always going to be a challenge of coming into a squad as talented and in some ways set as Louisville City FC and have an immediate impact. But on Saturday night as McLaughlin bagged his first league goal for his new club, the sense of excitement for both the player and his teammates was in full display during LouCity’s 2-0 victory against Atlanta United 2 before a crowd of 11,105 at Lynn Family Stadium.

“It was unbelievable,” said McLaughlin, whose 63rd-minute goal sealed the second win of the week for the Central Division leaders. “I’ve been dreaming about scoring in this fantastic stadium in front of these amazing fans and it’s been a long journey for me over the last two years to get back to this level. To be able to score a goal in a wonderful moment like this in front of so many fans and my girlfriend was fantastic.”

McLaughlin wasn’t the only player to shine, either. With interim Head Coach Danny Cruz resting some notable names as the side played its third game in eight days including midfielders Corben Bone and Brian Ownby and defender Jonathan Gomez, the game brought a first start for Joshua Wynder at center back, and a solid 57 minutes of action that saw the 16-year-old make three interceptions, complete 22 of 26 passes and make six recoveries.

“I felt the guys that came in did an excellent job,” said Cruz. “It’s a luxury as a coach when you feel confident, as I've said over and over again, to play anybody in that locker room. I felt the mentality of the group, especially coming out of the second half, was fantastic. All in all, we talked a ton today about how we keep climbing. We don’t stop. Ultimately, when you put in an effort like that as a group, you put yourself in a position to take three points.”