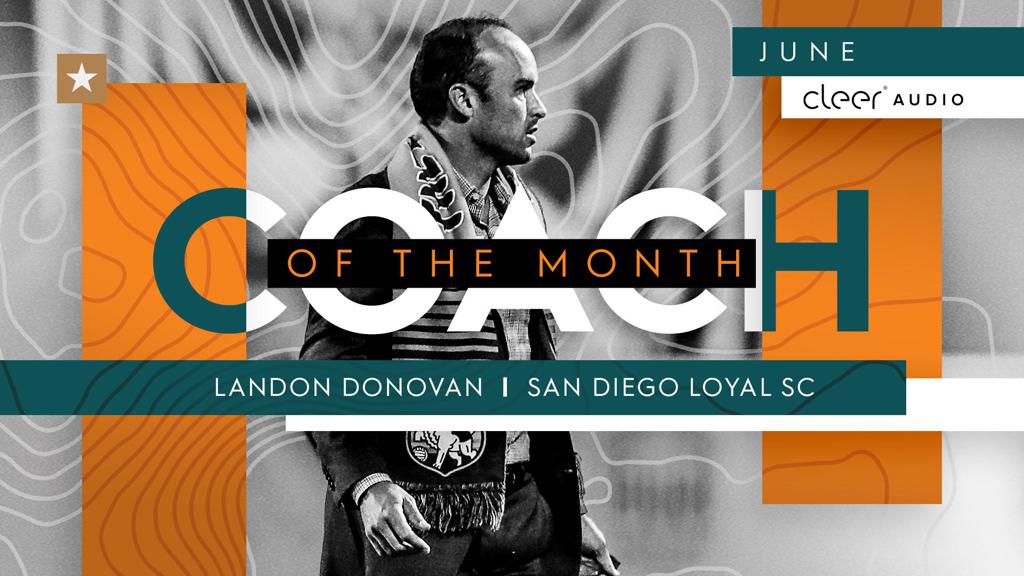 TAMPA, Fla. – San Diego Loyal SC’s Landon Donovan has been voted the USL Championship’s Coach of the Month for June, earning the award after leading his side to an undefeated six-game run throughout the month that saw the side post a perfect home record and move into the top three positions in the Championship’s Pacific Division.

The award is the former U.S. Men’s National Team legend’s first in the coaching ranks as the side earned draws on the road against fellow division title contenders Phoenix Rising FC and Orange County SC to open the month before reeling off four consecutive victories – including one at home to Phoenix on June 19 – that saw the side’s talented roster pull together for success.

Donovan was quick to pass along credit for the award to those around him as the side saw nine different players contribute at least one goal or assist. The side also trailed for only 14 minutes out of the 540 it played over the month, opening the scoring in five of six contests.

“We have a great group of players, coaches and staff who do all the real work at this club.  They are the people deserving of the recognition,” said Donovan. “We knew all along that this was going to be a process to get to where we wanted to be as a team.  We are making good progress but still know that this will be a long journey.”

Now in its second season in the Championship, SD Loyal has placed itself firmly among the contenders for not just a place in the USL Championship Playoffs at the end of the season but to be a title-contender when the postseason arrives. While the club’s recent run of success – which currently sees San Diego on a nine-game undefeated streak overall ahead of Saturday night’s game against Pacific Division leader Phoenix Rising FC – has been a major plus, Donovan and his team are as focused on the process as the results as they look to stake a claim as one of Championship’s top clubs.

“We are keenly focused on the training process and how we treat each other every day,” said Donovan. “We don't focus on results; we focus on culture and performance.  As long as we continue to do things the right way, the positive momentum will continue.”

Donovan received 38 percent of the vote to take the second monthly award of the season, narrowly edging out Orange County SC’s Braeden Cloutier on 37 percent after Cloutier also led his side to an undefeated month of June with three wins in five games and a +5 goal differential.