Progression is in infancy under new Head Coach, but signs point to future success after late escape against Rowdies 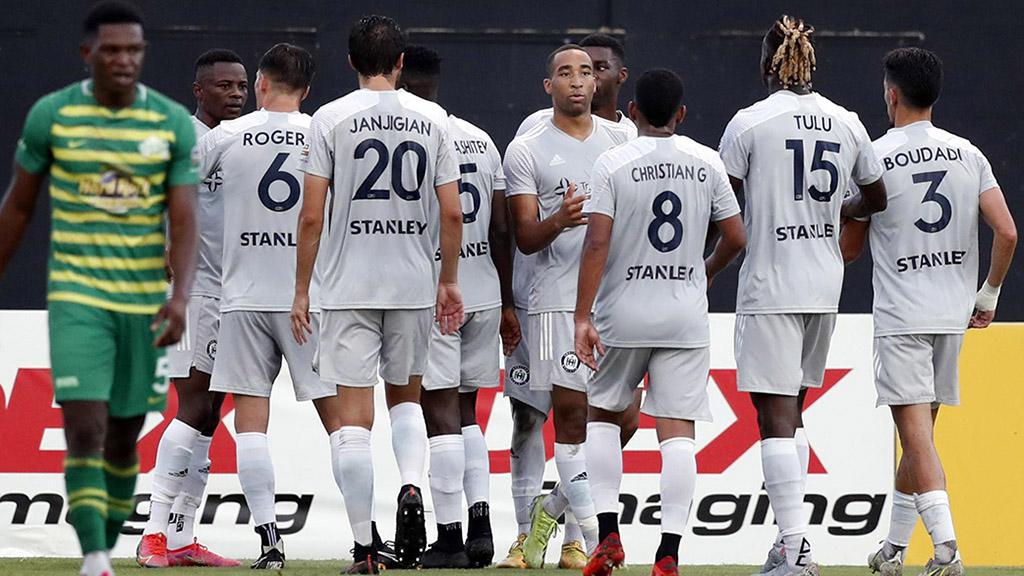 Hartford Athletic was pushed to the limit defensively by the Tampa Bay Rowdies on Tuesday night at Al Lang Stadium, but emerged with a victory that for Head Coach Harry Watling showed the side's character. | Photo courtesy Matt May / Tampa Bay Rowdies

ST. PETERSBURG, Fla. – It seemed at any moment the dam in front of the Hartford Athletic goal – constructed by goalkeeper Jeff Caldwell and a group of players determined to hold onto their one-goal lead at Al Lang Stadium – was going to break.

From just the 89th minute on Tuesday night, the Tampa Bay Rowdies hammered away, recording nine shots of their own, not even counting a stray deflection off a Hartford defender from a low cross that caromed off the crossbar, setting off a wild sequence that saw bodies thrown around the Athletic penalty area in pursuit of a game-leveling goal and the denial of those efforts.

When the final whistle blew after nine minutes of stoppage time, though, the visitors had held onto their 1-0 victory and claimed a notable – if improbable – notch on their belts this season.

“I think two things,” said Athletic Head Coach Harry Watling, trying to make sense of what he’d just seen. “First of all, it was with us tonight, sometimes it falls for you and sometimes it doesn’t. Second, I can’t fault my goalkeeper and my back line. It was literally war in there and they were willing to die for the shirt.”

The determination to see out the win – reversing a 1-0 defeat when the teams had met earlier this season at Dillon Stadium where things certainly didn’t go Hartford’s way – showed how far the Athletic have come in a short time under Watling’s stewardship. While armed with some notable holdovers from the club’s trip to the postseason in 2020 under former Head Coach Radhi Jaidi, this is a different looking team than competed last fall. Of the 18 players that suited up for the Athletic on Tuesday night, only five were part of the side’s playoff game last October.

The new arrivals, like Caldwell – who made key saves in both hales to allow Derek Dodson’s 24th-minute goal to stand as the winner – or center backs Tulu and Thomas Janjigian – both of whom blocked two shots apiece in the game’s frenetic conclusion – have given Hartford a steel at the back that withstood everything one of the best attacking sides in the league in Tampa Bay could throw at it on home turf. 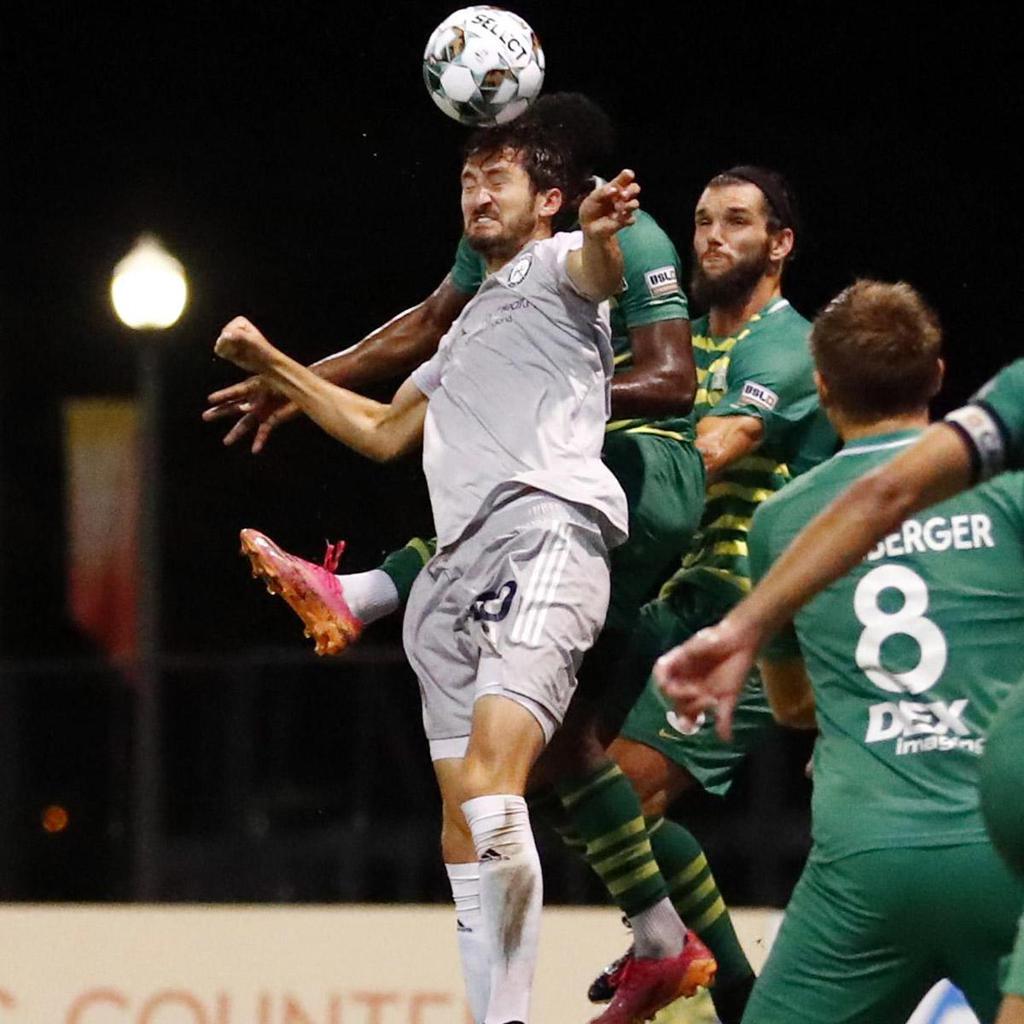 “We’re only nine, 10 games in, but to have the character to do that, you need to have that away from home,” said Watling. “This is a really tough place to come, and I’ve got a ton of respect for them as a club and an organization, the players that they have, so to come in here and get three points is massive.”

Was there good fortune too? Sure. Rowdies captain Sebastian Guenzatti missed a handful of chances you would expect him to connect on, including hitting the post just minutes before Dodson gave Hartford the lead. Tampa Bay finished the night with its highest single-game Expected Goals mark of the season at 4.81xG – also the second-highest by any team in the league this season – but somehow came away empty.

But those are the breaks a new side charting its own path to the sort of consistent success the Rowdies have achieved under Head Coach Neill Collins can need on its way. Ten games into his tenure at the club, Watling sees a team that still has room for growth, but that had the fortitude that can on its own carry it a good way in its pursuit of a second consecutive postseason berth.

And as Hartford grows, so does Watling. A former Academy coach at both Chelsea and West Ham United that oversaw the early careers of some current England internationals – including both Mason Mount and Declan Rice, both part of the Three Lions’ run to the Final of Euro 2020 on Sunday – the move across the Atlantic to join Hartford had his own ambition in mind as well as that of Owner Bruce Mandell and the Athletic’s leadership. Becoming a First Team Head Coach at 31 years old – where he believes he would have had to wait four or five more years to earn that opportunity in England – is allowing Watling to put his own concepts into practice at a club he hopes to be part of for the long-term.

It’s been an interesting experience for Watling so far. The travel burden teams face across the United States is something very different to domestic soccer in England, and with a wide variety of styles and no identifiable trends in a certain direction across the league, Watling has looked to adapt the core ideas with which he wants the Athletic to play to the situation they’re facing. 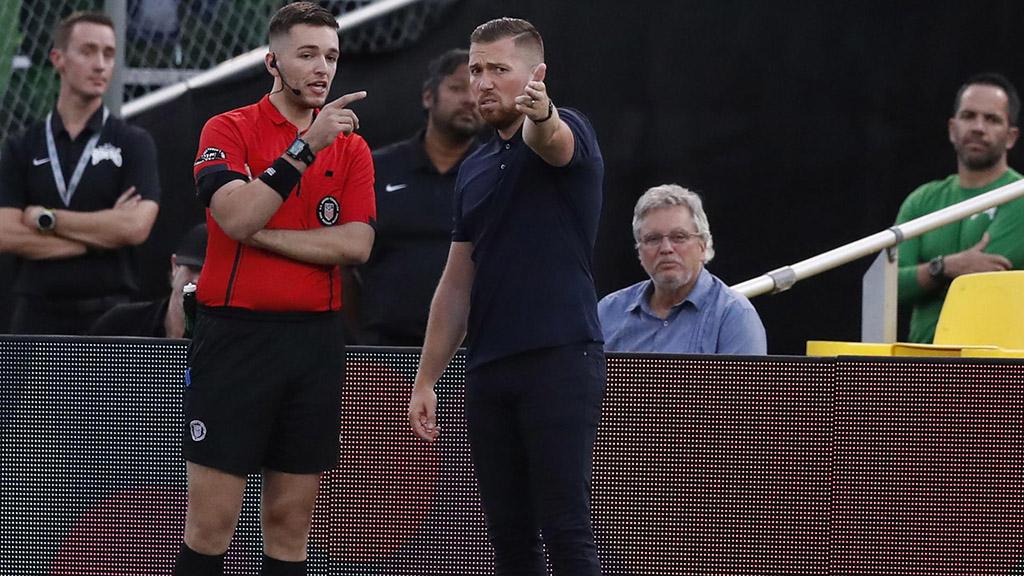 Hartford Athletic Head Coach Harry Watling has led his side to a top-three position in the USL Championship's Atlantic Division after Tuesday night's victory on the road against the Tampa Bay Rowdies. | Photo courtesy Matt May / Tampa Bay Rowdies

“Red Bulls II last week played a four-box-two, Tampa Bay played a back three, Charleston on Saturday will play a 4-3-3,” said Watling. “It’s interesting and it’s about knowing your model and your gameplan and adapting it to each team.”

The side’s full form is still a work in progress, in part because of the current absence of two key players in Juan Carlos Obregon Jr., with Honduras’ Olympic team as it prepares for Tokyo 2020, and Walmer Martinez, who on Sunday recorded an assist as El Salvador took victory in its opening game of the 2021 Concacaf Gold Cup against Guatemala.

The Athletic will keep trying to find ways to win and adapt in their absence, and while they will hope for fewer high-wire acts defensively than the one they pulled off against the Rowdies, the potential for what this side can become is becoming clearer after every game.

“We’re building something, and we learn with every game, and that’s an important process,” said Watling. “If you can learn whilst winning on occasions like this, it’s a good sign.”