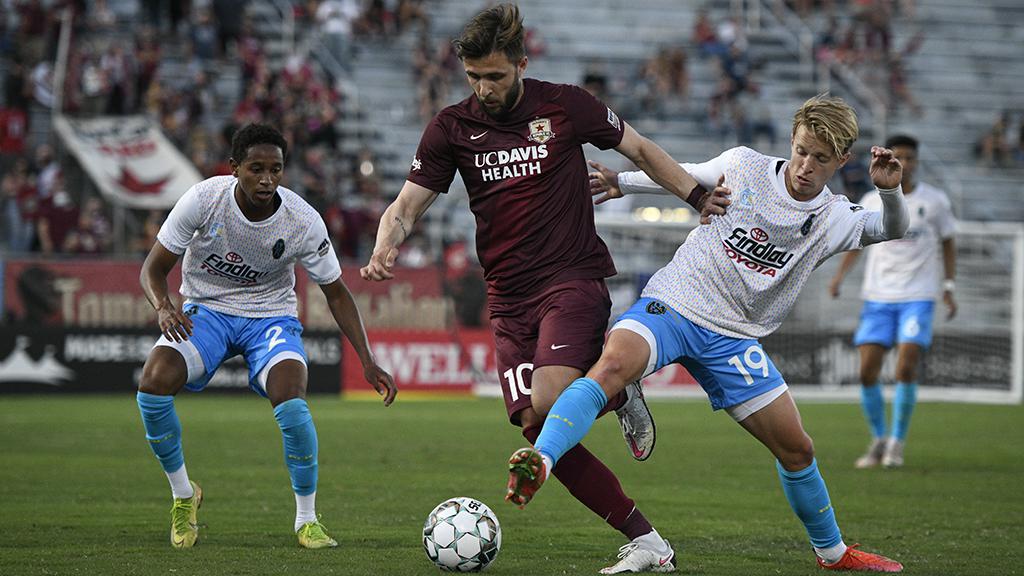 Sacramento Republic FC took a 3-1 victory when it hosted Las Vegas Lights FC on May 12, but that now stands as the side's most recent victory with Republic FC on a nine-game winless streak as it heads to Cashman Field on Wednesday night. | Photo courtesy

LAS VEGAS – Las Vegas Lights FC will try to build on two consecutive victories as it welcomes Sacramento Republic FC to Cashman Field on Wednesday night with the visitors looking to end an extended winless run. Kickoff is scheduled for 10:30 p.m. ET.

@LVLightsFC (4-6-1, 13pts) rallied for a 2-1 victory against Oakland Roots SC on Saturday night at Las Positas College on Saturday night as Daniel Crisostomo and Tony Leone each scored their first goals of the season to send the side into fourth place in the Pacific Division. Las Vegas has now rallied to earn seven points in the Championship this season from losing positions, second-most in the league, as the side as begun to jell after a tough start to the season under Head Coach Steve Cherundolo. In the center of that has been Crisostomo, who is the lone player to have played every minute of the season for the side this season. Formerly at Orange County SC, the 24-year-old has posted a passing accuracy rate of 89.9 percent on 58.7 passes per 90 minutes while leading the team with 28 interceptions defensively and posting a 59.3 percent duel success rate.

@SacRepublicFC (2-6-3, 9pts) heads to Cashman Field hoping for the same success as it earned in its first meeting with Las Vegas this this season, a 3-1 win that on May 12 that stands as the side’s most recent victory. Sacramento has gone winless in its nine subsequent games after suffering a 2-0 defeat to Orange County SC on Saturday night at Heart Health Field in a game that ended with the side reduced to nine men as both Nabi Kibunguchy and Mitchell Taintor were sent off. Kibunguchy will be available for Wednesday’s game following the rescindment of his suspension following an appeal to the Independent Review Panel, and will hope to help his hometown club earn its first win in Las Vegas in its history after taking one draw and one defeat in its prior two visits.