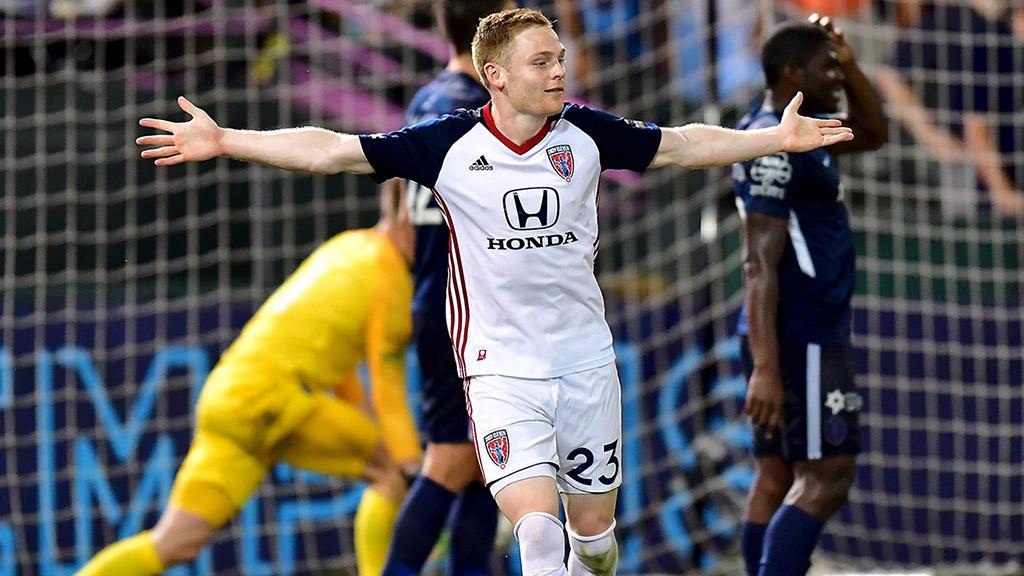 Less than a year removed from his selection to the USL Championship’s 2020 All-League Team for Indy Eleven last October, Tyler Pasher will get the chance to make his senior international debut.

The Gold Cup kicks off on Saturday, with Canada set to open against Martinique on Sunday at a venue Pasher will be familiar with in Children’s Mercy Park in Kansas City, Kan. in Group B, with games against Haiti (July 15) and the United States (July 18) to follow complete the opening round.

Here’s a look at the players, including Pasher, who totaled more than 400 regular-season appearances and almost than 30,000 minutes of action in both the Championship and USL League One, and the paths they took prior to this summer’s event.

Nine players selected in Canada's squad for the 2021 Concacaf Gold Cup can trace their roots in the professional game to the USL Championship and League One.

Ayo Akinola, Toronto FC II (2016-19) – Ayo Akinola made his debut for Toronto FC II as a USL Academy signing in the 2016 USL Championship season, and recorded his first two goals for the side prior to competing for the United States at the FIFA U-17 World Cup the following year. While born in Detroit, Akinola was raised in Brampton, Canada and recently filed a switch to represent Canada having made a total of 34 appearances for TFC II that saw him record eight goals and two assists in both the Championship and USL League One prior to his breakthrough with Toronto FC last year at the MLS is Back Tournament.

Maxime Crepeau, FC Montreal (2015-16), Ottawa Fury FC (2018) – Maxime Crepeau was the primary goalkeeper for FC Montreal during its first two seasons as he made 30 appearances and recorded four shutouts, but his breakthrough in the professional ranks arguably came in 2018 while competing on loan for Ottawa Fury FC. That season, Crepeau made 31 appearances and set a USL Championship record with 15 shutouts to help guide Fury FC to the postseason and earned the Championship’s Goalkeeper of the Year award. He has since become the starter for Vancouver Whitecaps FC and cemented his place in Canada’s goalkeeping corps.

Alphonso Davies, Vancouver Whitecaps FC 2 (2016) – Alphonso Davies arrived as one of the youngest players in the Championship’s history when he turned professional with WFC2 as a 15-year-old prior to the 2016 season, where he began his remarkable ascent to the top of the game. Still the youngest goalscorer in the Championship’s history at 15 years, 6 months, 13 days old, Davies made 11 appearances for WFC2 in addition to signing with Whitecaps FC, and has since gone on to become the face of Canadian men’s soccer after a record-setting transfer to Bayern Munich, where he has claimed the Bundesliga, UEFA Champions League and FIFA Club World Cup.

Liam Fraser, Toronto FC II (2015-19) – Liam Fraser made his debut for Toronto FC II as a 17-year-old in the club’s inaugural season in 2015 and went on to make 62 appearances in the Championship while recording two goals and five assists over the next four seasons while making the transition to the club’s First Team. Traded earlier this season to Columbus Crew SC, Fraser was also one of three players alongside former teammate Ayo Akinola and Dayne St. Clair to see action in USL League One’s inaugural season, making two appearances for TFC II in 2019, and currently has made more appearances in the USL (64) than in Major League Soccer (39) for his career.

Doneil Henry, Ottawa Fury FC (2018) – Doneil Henry’s time in Canada’s capital was brief, but impressive. The former Toronto FC player made three appearances for Fury FC in 2018 and helped the side record shutouts in all three games while competing with future international teammate Maxime Crepeau.

Mark-Anthony Kaye, Wilmington Hammerheads FC (2014), Toronto FC II (2015), Louisville City FC (2016-17) – Mark-Anthony Kaye’s path might be one of the most interesting at the Gold Cup, with the current Los Angeles FC midfielder having begun his path in the professional ranks on loan in the Championship with Wilmington Hammerheads FC in 2014, where he recorded two goals and two assists in seven appearances. The following year he signed with Toronto FC II for its inaugural season in the league, but in 2016 he elected to move to Louisville City FC, where things quickly got on track.

Kaye’s performances for LouCity saw him first called up to the Canada U-23 MNT in 2016, and then to the senior national team the following year, including his first selection to a Gold Cup roster. After recording five goals and five assists in 43 regular-season games for Louisville while also helping the side win the 2017 USL Championship Final, he was transferred to LAFC, where in 2019 he earned a place on the MLS All-Star Team and helped the club claim the 2019 MLS Supporters Shield.

Richie Laryea, Orlando City B (2016-17) – Selected as the No. 7 pick in the 2016 MLS SuperDraft, Richie Laryea spent the majority of his first two professional seasons in the Championship with Orlando City B, which he helped reach the 2016 USL Championship Playoffs while making 35 regular-season appearances and recording three goals and four assists. The 26-year-old’s move as a free agent to Toronto FC in 2019 provided the major breakthrough, however, as he quickly established himself in the top flight, earning his first senior national team call-up the same year.

Tyler Pasher, Pittsburgh Riverhounds SC (2015), Sporting Kansas City II (2016-17), Indy Eleven (2018-20) – After beginning his professional career overseas in Finland, Tyler Pasher’s journey in the Championship began with Pittsburgh Riverhounds SC six years ago, where he made 21 appearances and recorded two goals. He then moved to Sporting Kansas City II for its inaugural season in 2016 and became a mainstay for the side over the next two seasons, winning a pair of Western Conference Titles while making 48 appearances for the side and recording five goals and four assists.

Pasher signed an MLS contract with SKC for his second season with the organization, but after being included in a trade with Atlanta United FC following that campaign he elected to sign instead with Indy Eleven. After an injury-hit 2018 that saw him record only 10 appearances, Head Coach Martin Rennie moved Pasher into an attacking role, where he flourished. The 27-year-old recorded 21 goals in 47 regular-season appearances and two more as Indy reached the Eastern Conference Final of the 2019 USL Championship Playoffs. After being named to the Championship’s All-League Team in 2020, he was transferred last offseason to Houston Dynamo FC, where he has recorded three goals and three assists in eight appearances this season in Major League Soccer, earning his chance at a first international cap at the Gold Cup.

Dayne St. Clair, Forward Madison FC (2019), San Antonio FC (2020) – As with his national team counterpart Richie Laryea, Dayne St. Clair was also a No. 7 overall pick in the MLS SuperDraft, taken by Minnesota United FC in the 2019 edition. A former USL League Two player for K-W United and the New York Red Bulls U-23, St. Clair spent parts of his first two seasons on loan, first with USL League One side Forward Madison FC in 2019 where he recorded five appearances and one shutout and then with the Championship’s San Antonio FC in 2020, where he recorded three shutouts in five appearances. Recalled midway through the season by the Loons in 2020, St. Clair has now made 22 regular-season appearances for MNUFC, establishing himself as the club’s starter while also making three appearances in the 2020 MLS Cup Playoffs.