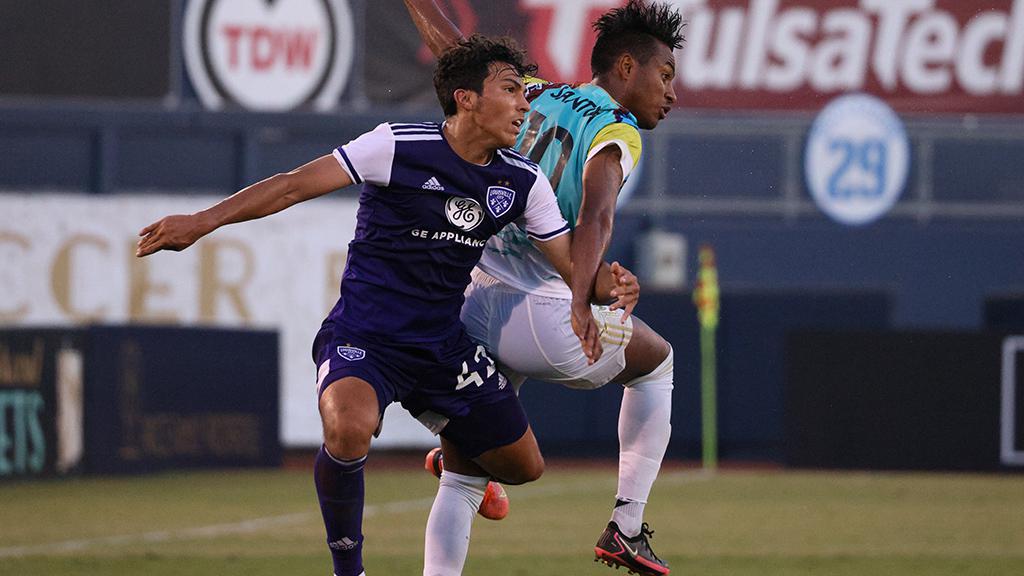 Louisville City FC's Jonathan Gomez battles for possession in his side's first visit to ONEOK Field this season, where the visitors came away with a hard-fought 3-2 victory against FC Tulsa. The sides meet again on Saturday. | Photo courtesy FC Tulsa

Saturday night brings a busy schedule in the USL Championship’s Eastern Conference, including some notable rematches in the Central Division and opportunities to bolster playoff credentials. Here are five things to look for over the upcoming weekend.

LOUISVILLE LOOKING TO KICK ON WITH ADVANTAGE

Powered by a memorable Olimpico by Cameron Lancaster and Jonathan Gomez’s first goal in the professional ranks, Louisville City FC rocketed out to a three-goal lead inside the opening 10 minutes of its prior visit to FC Tulsa this season on June 19, but as the side returns to ONEOK Field on Saturday afternoon (4 p.m. ET | ESPN+) the battle it faced to eventually come away with a 3-2 victory as the hosts fought back impressively throughout the remainder of the game was as valuable to interim Head Coach Danny Cruz as the three points it earned.

“Honestly, when we played them the first time, I think we came out of it a little bit humbled, which was good,” said Cruz this week. “We scored three goals, but then we were under pressure there for quite a long time, and the idea is just because you scored three goals, it doesn’t stop. You don’t have the ability to just take a break because what could happen is what happened. You give up one goal, then you give up another and so I think we did a really good job, obviously, coming away with three points and the mentality was right on such a short week, but at the end of the day what I want it to is when we get that goal, we’re going again.”

Louisville has had a little more preparation time for its second meeting with Tulsa this season, having earned a 4-2 victory against Sporting Kansas City II last Friday night in its most recent outing that illustrated some of what Cruz was looking for. A spell of three goals in 10 second-half minutes led LouCity that night, and after reviewing the action from the first game between the sides since 2015 a few weeks ago Cruz believes his side is in a better place to handle the challenges that Rodrigo da Costa and his teammates will have to offer.

After Wednesday’s inaugural game served as a type of soft opening for the Charlotte Independence at their new downtown home at American Legion Memorial Stadium, Saturday’s clash with defending Championship Western Conference Title holder Phoenix Rising FC should provide a rousing night of action for the club’s fans.

If the Independence are going to have a shot at taking down Phoenix in the first meeting between the clubs, however, it is going to have to perform far better in its defensive end. Charlotte has conceded 21 shots on goal in its past two outings against Pittsburgh Riverhounds SC and the New York Red Bulls II, and while goalkeeper Brandon Miller has racked up 17 saves – becoming the second goalkeeper in the Championship’s history to pass 400 regular-season saves for his career – the hosts know they can’t offer that many chances to a team with Phoenix’s attacking firepower.

“I thought Brandon was fantastic for the first 15 minutes and we were in a pretty big hole on plays that we just don’t make, like giving possession away easily and not being in spots to cover it,” said Independence Head Coach Mike Jeffries on Wednesday night. “We’ve been really good this year, for the most part, we’ve been ahead in terms of managing games and limiting chances and the way we were broken down, it was just too easy and that was the game.” 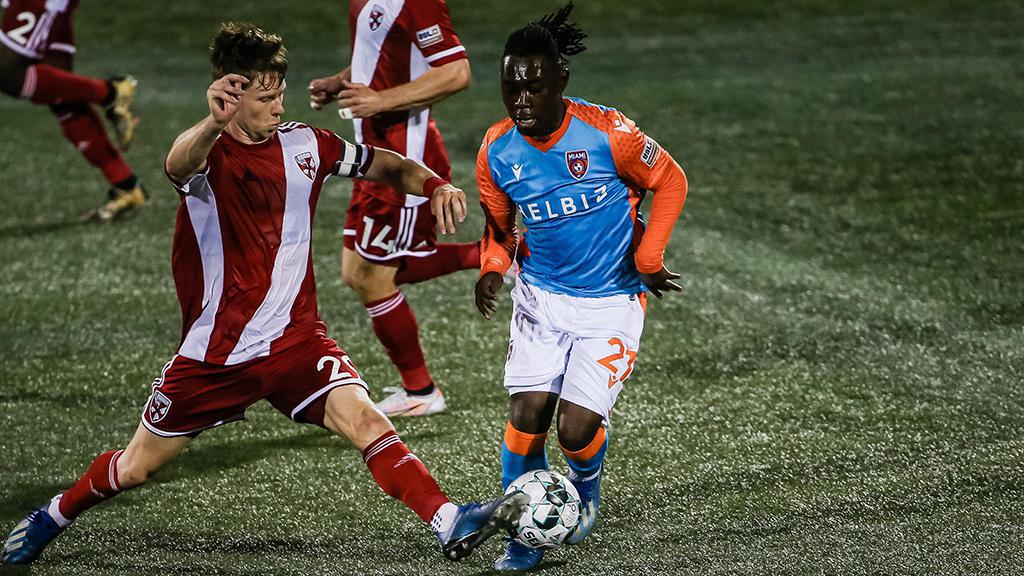 Miami FC has a chance to win consecutive games for the first time this season when it visits Loudoun United FC on Sunday evening, a team it defeated 2-1 at the start of this year's campaign. | Photo courtesy Orovio Photography / Miami FC

Miami FC picked up an important first on Wednesday night as it defeated Florida rival the Tampa Bay Rowdies 2-1 at FIU Stadium, with Callum Chapman-Page’s goal 13 minutes from the end proving he difference in the club’s first win against the Rowdies since joining the USL Championship last season.

“All of them in there work unbelievably hard every day, and when it’s asked, they put the work in,” said assistant coach Andy Thompson on Wednesday night. “The ways the boys worked and stuck to the gameplan, it was an 11 out of 10 in terms of effort and in terms of togetherness and trust, so I’m really happy for them.”

Now Miami will try to do something it hasn’t accomplished so far this season in winning consecutive games as it heads to Loudoun United FC on Sunday evening at Segra Field (5 p.m. ET | ESPN+). Sitting in third place in the Atlantic Division as the weekend begins, the opportunity is an important one for the visitors against the division’s last-placed side in what certainly looks to be a hard playoff race ahead, but Miami will be aware of the threat United poses. When these sides met for the first time this season, while Miami took an early two-goal lead at FIU Stadium, the visitors tilted the field in their favor after a red card to Janos Loebe to rack up 34 shots overall only to suffer a 2-1 defeat. As much as Loudoun has struggled at times this season, Miami will have to work hard to get another victory.

OKC Energy FC couldn’t have asked for a better result on Wednesday night as Atlanta United 2 and Indy Eleven finished in a 1-1 draw, which has opened up the opportunity for Energy FC to jump past both clubs as it hosts Indy on Saturday night at Taft Stadium (8:30 p.m. ET | ESPN+). Entering on a four-game undefeated streak that has seen the side record three shutouts in that span, the turnaround in form from a winless start has been a major confidence boost for the side.

“I would say the team is feeling really good about themselves,” said Energy FC interim Head Coach Leigh Veidman. “Everyone is putting in work and ready to contribute. They know it’s a long season, but the recent results have shown everyone that we are going to fight for every point and that we won’t be beaten easily. Like I said before, we’ve been getting ourselves into similar scenarios throughout the season so far, but recently, we’ve been able to do the little things to see out the result. Mentally, we are strong.”

Energy FC will enter having had a full week to prepare after its 0-0 draw with FC Tulsa last weekend, but for goalkeeper CJ Cochran the fact that Indy is coming in after having already played once on the road in Week 12 doesn’t mean OKC will be facing a squad battling fatigue in its second game in four days.

“They play three games in a week, which you think they might be a bit tired, but we just did that and had a really great week,” said Cochran. “Sometimes, when you’re playing well you can keep it rolling, so I expect them to play well. They have a lot of good players, especially out wide, and we’ll want to make sure they don’t score from a set piece again because that’s an area we pride ourselves on.”

Hartford Athletic has played the fewest games of any team in the Atlantic Division so far this season, but the side is set to be busy over the remainder of July and start of August starting with Saturday night’s game with the New York Red Bulls II at Dillon Stadium (7 p.m. ET | ESPN+). The side will play seven games in the next 28 days, including key visits to division rivals the Tampa Bay Rowdies, Charleston Battery and Pittsburgh Riverhounds SC, that will help shape the playoff race for the current fourth-placed side in the standings.

Despite the business of the upcoming schedule – and the absences of both forwards Walmer Martinez (EL Salvador) and Juan Carlos Obregon (Honduras U-23s) for international duty over that span, Athletic Head Coach Harry Watling is optimistic his squad can come through strongly to maintain its current course.

“We’ve not built an 11, we’ve built a squad of players that are able to play in a multitude of positions,” Watling told WTNH.com this week. “We spoke to the squad as a whole today and said, ‘just make sure you’re ready. Make sure you’re ready when called upon,’ because we have a Tuesday or Wednesday/Saturday most weeks coming up, and that’s how we’ve designed this squad, to be physically robust enough to cope with the challenges of a schedule this tough.”