17 Championship, League One Players to Shine at 2021 Concacaf Gold Cup 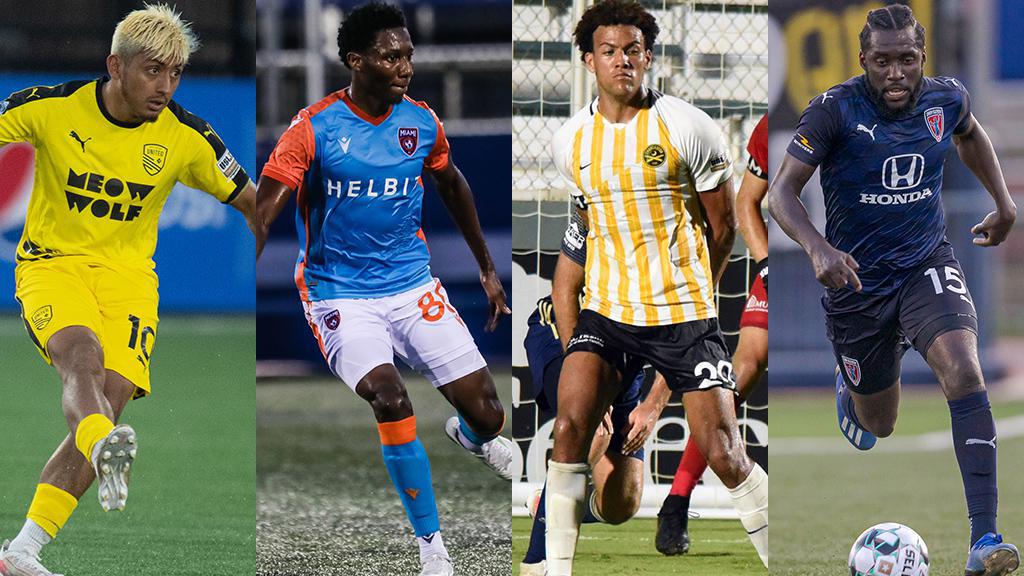 TAMPA, Fla. – Seventeen players from the USL Championship and USL League One will represent their countries starting this weekend as the 2021 Concacaf Gold Cup kicks off across the United States, with veteran figures and new faces set to take the field in the 16-team field vying for the regional title.

The Championship’s Miami FC will have three representatives at the tournament, with goalkeeper Brian Sylvestre set to compete for Haiti and midfielders Speedy Williams and Lamar Walker called up by Jamaica. Sylvestre made his senior international debut on Tuesday night as Haiti booked its place in the group stage with a 4-1 victory against Bermuda, sending Les Grenadiers into a group that also includes the United States, Canada and Martinique.

Joining Sylvestre in the Haiti squad are Orange County SC’s Ronaldo Damus and Birmingham Legion FC’s Zach Herivaux, both of whom appeared in both games of the country’s advancement through the final qualification rounds in Fort Lauderdale, Fla. this past week. Damus has been one of the hottest scorers in the Championship in the build-up to the Gold Cup, recording six goals in five games for Orange County prior to his departure to join the national team. Also included is young defender Francois Dulysse of USL League One side the New England Revolution II.

Williams and Walker will look to help Jamaica advance from a group that includes Costa Rica, Guadeloupe – which includes New York Red Bulls II forward Luther Archimede – and Suriname as the Reggae Boyz make their bid for a fourth consecutive trip to the Semifinals. A three-time USL Championship Final-winner in his career, Williams was named to the Championship’s All-League First Team in 2020 before making the move to Miami from Louisville City FC this past offseason, while Walker joined Miami after the club acquired him from the Jamaica Premier League’s Portmore United last winter.

USL Championship & League One Players at the 2021 Concacaf Gold Cup

Seventeen players from the USL Championship and League One will represent their nations at the 2021 Concacaf Gold Cup throughout the month of July.

Three Championship standouts are set to represent El Salvador with veteran forward Joaquin Rivas of FC Tulsa being joined by Hartford Athletic’s Walmer Martinez and New Mexico United’s Amando Moreno in the squad for La Selecta. Rivas has made 10 appearances for his country in his career and only missed out on selection for the Gold Cup in 2019 due to injury. This past June he helped the side advance to the final stage of FIFA 2022 World Cup Qualifying, notching an assist in a 4-0 victory against St. Kitts and Nevis in the knockout stage before this fall’s Octagonal final stage of qualifying.

Moreno and Martinez were both named to the squad more recently, with the New Jersey-born Moreno having previously represented the United States at the U-20 National Team level before this year making a one-time switch to the country of his heritage. Martinez is also a dual-national selection, with the California native having earned his first professional contract this season with Hartford after competing for USL League Two side the Des Moines Menace and NCAA Division II side Cal State Monterey Bay collegiately. Martinez scored his first international goal on June 8 in World Cup Qualifying against Antigua and Barbuda.

El Salvador will take on Mexico and a pair of other nations with USL Championship representation in Curacao – which includes Oakland Roots SC goalkeeper Zeus De La Paz – and Trinidad and Tobago in the group stage. A quartet of players have been selected by the Soca Warriors; defenders Jelani Peters of Pittsburgh Riverhounds SC, Neveal Hackshaw of Indy Eleven and Triston Hodge of Colorado Springs Switchbacks FC and attacking midfielder Dre Fortune of Memphis 901 FC. Hackshaw bring the most experience to the squad, having last year been named to the Championship’s All-League Team for a second consecutive season.

The Charleston Battery’s AJ Paterson is set to lead Grenada into its first Gold Cup in a decade as it takes on Honduras, Panama and Qatar in Group D. Paterson has been a mainstay for Grenada since making his debut for the country in 2018 and captained the side as it clinched its trip to the Gold Cup by defeating Belize 3-2 in its final game of the 2019-20 Concacaf Nations League campaign which saw the side finish top of its group in League B.