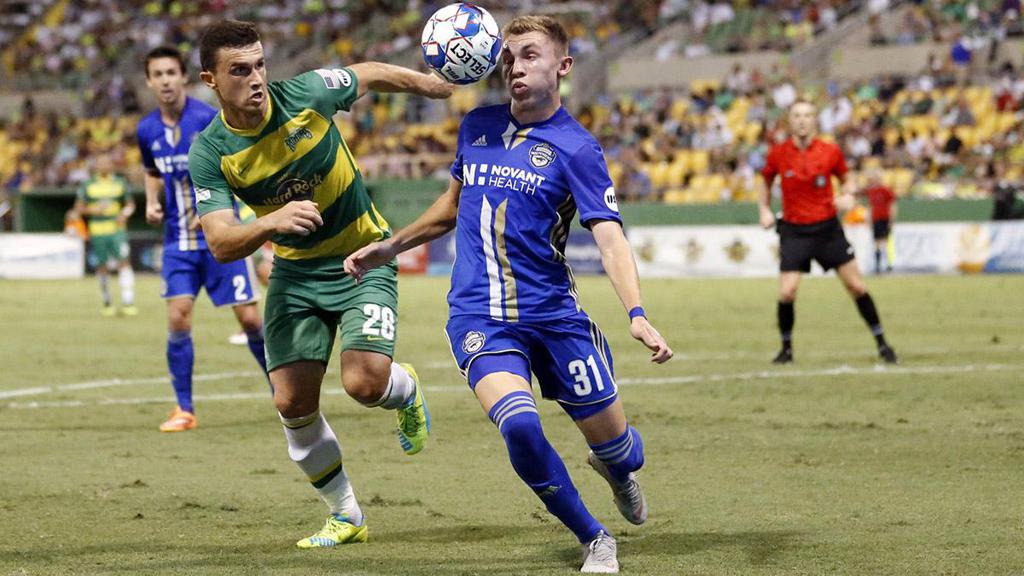 The 2021 Concacaf Gold Cup kicks off on Saturday night as 15 countries from across the region are joined by 2022 FIFA World Cup host Qatar in the group stage of the biennial event. The United States opens its bid to return to the tournament Final on Sunday night as it faces Haiti at Children’s Mercy Park in Kansas City, Kan. to open play in Group B, with games against Martinique (July 15) and Canada (July 18) to complete the opening round.

Among the 23 players selected by United States Head Coach Gregg Berhalter for the tournament are 13 players that have previously seen action in the USL Championship, from those who made a quick stop in the league to others who honed their craft before making the step up to the top flight and international action.

Here’s a look at those players, who totaled 169 regular-season appearances and more than 13,000 minutes of action in the league, and the paths they took in the Championship prior to this summer’s event.

George Bello, Atlanta United 2 (2018-20) – Bello took his first steps into the professional ranks with ATL UTD 2 as a 16-year-old during the 2018 season. He went on to make 19 appearances overall and record one goal in just over 1,000 minutes of action for the side before moving full-time into Atlanta’s MLS squad.

Gianluca Busio, Sporting Kansas City II (2018-20) – Busio was also 16 years old when he made his debut for Sporting Kansas City II three years ago and notched one goal and two assists in 16 appearances over three seasons while emerging as one of the most intriguing talents in America. Rumored to be headed to Europe soon, the 19-year-old is one to watch closely this month.

Jonathan Lewis, Louisville City FC (2018) – Lewis spent a short stint on loan with Louisville City FC during the club’s USL Championship Final-winner 2018 campaign from New York City FC, where he notched one assist in five appearances for the side. Now part of the Colorado Rapids, Lewis has been part of an impressive turnaround at Dick’s Sporting Goods Park this season.

Sebastian Lletget, LA Galaxy II (2015) – Sometimes you need a tune-up, and that’s exactly what Sebastian Lletget’s one appearance for Los Dos served as against Colorado Springs Switchbacks FC as he got acclimated after a move from West Ham United earlier that year. Four years after his senior national team debut, Lletget has become one of the indispensable members of Berhalter’s squad.

Donovan Pines, Loudoun United FC (2019) – Pines was destined to become the next big thing on D.C. United’s back line when he signed as a Homegrown Player out of the University of Maryland in 2018, but even the best timber can use some seasoning. Pines made six appearances on loan with Loudoun United in 2019, including his professional debut against Nashville SC.

Miles Robinson, Charleston Battery (2017), Atlanta United 2 (2018) – Robinson took some time to emerge in the professional ranks, making six appearances on loan with the Battery in his rookie season before recording another 14 with Atlanta United 2 in the 2018 season. That seemed to set him up for success, with the youngster earning MLS Best XI honors in 2019 while making three senior international appearances going into the Gold Cup.

Cristian Roldan, Tacoma Defiance (2015) – Roldan only made one appearance for the Defiance, but it certainly was a memorable one. Selected by Seattle Sounders FC in the 2015 MLS SuperDraft, the former University of Washington standout made his debut in the Defiance’s first game in the Championship and scored in the side’s 4-2 victory against Sacramento Republic FC. It’s been up and up ever since.

James Sands, Louisville City FC (2018) – Following a similar path to Jonathan Lewis, Sands headed to Louisville City FC on loan from New York City FC for a short stint on loan in the 2018 season where he impressed with his composure on the ball in going the full 90 minutes in all three appearances. Sands notched an assist for LouCity, and helped the side record two clean sheets while he was at the club.

Matt Turner, Richmond Kickers (2016-17) – A former USL League Two standout, Turner made a handful of appearances for the Kickers in his rookie season in 2016 but then came into his own with 20 appearances for Richmond the following year. Now established as one of the top goalkeepers in Major League Soccer with the New England Revolution, Turner recorded 81 saves and seven shutouts while competing for the Kickers that helped set up his future success.

Sam Vines, Charlotte Independence (2018) – Vines originally linked up with the Charlotte Independence as a USL Academy signing in 2017 but didn’t make an official appearance until the following year, by which point he’d signed his first Homegrown Player deal with the Colorado Rapids to join the pro ranks. Vines was almost ever-present for the Independence in the 2018 season, making 29 appearances and logging 2,303 minutes and four assists before settling in as one of the key players on Colorado’s back line since the start of the 2019 season.

Eryk Williamson, Portland Timbers 2 (2018-19) – Williamson made the most appearances of any player in the Gold Cup squad in the Championship, playing in 34 games and recording seven goals and 11 assists for T2 while earning a spot as one of the top midfielders in the league over that span. Those performances earned Williamson his chance with the Timbers in 2020, where he’s quickly become regarded as a key two-way player. Now he will get his chance at his senior international debut this month.

Jackson Yueill, Reno 1868 FC (2017-18) – Selected with the No. 6 pick of the 2017 MLS SuperDraft by the San Jose Earthquakes, Yueill began his professional career on loan with 1868 FC and made a big early impression that six starts was all that was needed to return to the MLS side. Yueill won 9 of 12 tackles and complete 223 of 262 passes (85.1%) in his time with Reno and has now become one of the top holding midfielders in Major League Soccer with the Quakes as well as a USMNT regular.

Gyasi Zardes, LA Galaxy II (2014) – Just like Sebastian Lletget, Zardes’ time with Los Dos was brief, but it was also productive. Now with more than 80 regular-season goals in MLS to his name and another 12 at the international level, Zardes scored in his lone appearance for Los Dos against Orange County SC in the 2014 season.