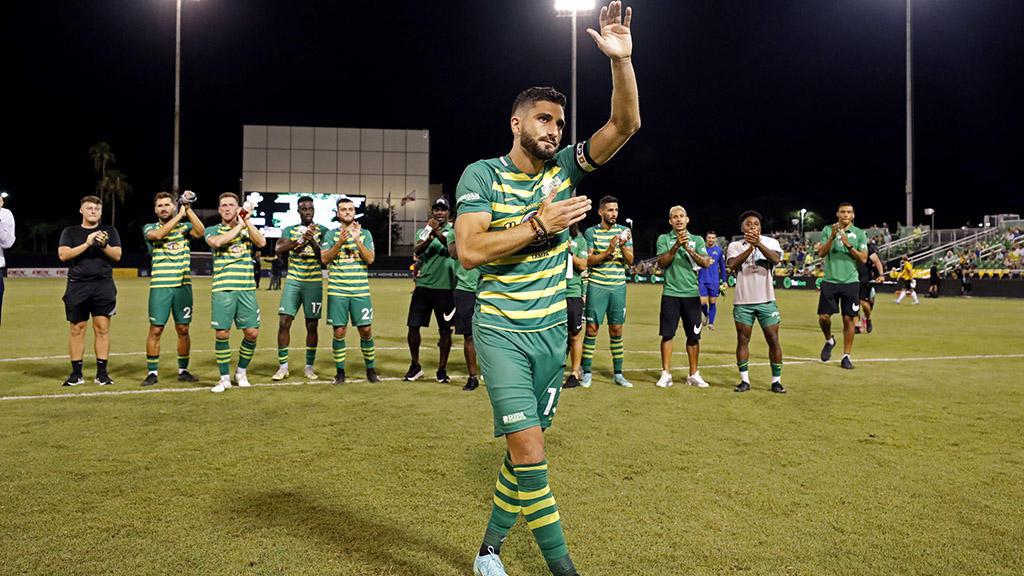 Tampa Bay Rowdies captain Sebastian Guenzatti is lauded by his teammates afer recording the game-winning goal in his 100th appearance for the club on Friday night against the Charleston Battery. | Photo courtesy Matt May / Tampa Bay Rowdies

A busy Friday night produced a pair of landmarks for veteran forwards in the Eastern Conference, while Saturday gave us two more impressive defensive displays from division contenders. Here are five talking points we took away from the action.

In retrospect, it would have been a surprise had Sebastian Guenzatti not marked his 100th appearance in all competitions for the Tampa Bay Rowdies with the sort of performance that has epitomized his past two-and-a-half seasons at the club. So, when the club’s captain stepped up to convert the only goal from the penalty spot as part of a four-shot performance and solid all-around display it held true to the form that Guenzatti has produced while leading the club to becoming a USL Championship Final contender since being handed the captaincy before the 2019 season.

Guenzatti was honored by his teammates and a crowd of more than 4,000 fans on Friday night at Al Lang Stadium as the Rowdies took their eighth win in 10 games to start this season, edging out the Charleston Battery with a 1-0 result that kept the side four points clear at the top of the Atlantic Division standings. The sixth player to reach the landmark in the club’s modern era, Guenzatti was glad to have the opportunity in front of friends and family as well as the fans in downtown St. Petersburg.

“Having my family here, and obviously the fans, for my 100th game was a dream come true,” said Guenzatti. “I didn’t get to do it at my other clubs, but I got to do it here. I want to thank all my teammates, all the staff, everybody that works here. Since day one, they’ve been unbelievable to me. I just want to thank everybody. I don’t want to forget anybody because everybody’s a huge part of this.”

When the Charlotte Independence first visited Highmark Stadium earlier this season, Pittsburgh Riverhounds SC was unable to turn its man-advantage and sustained pressure in the second half into a result after the Independence had grabbed a first-half lead. In the return match on Saturday night on the banks of the Monongahela, the Hounds got their reward in a 1-0 victory that served as their first in club history against the Independence.

The result came via a stifling performance that saw Charlotte fail to record a shot in the opening hour as Pittsburgh proved sharper in gaining possession and second balls than their visitors, much to the pleasure of Head Coach Bob Lilley.

“Our guys did a good job pressuring them and not letting them play through the lines too easily,” said Lilley. “We dominated possession against a team that usually does that pretty well. We did a pretty good job of all doing the work. When there was a loose ball — I look back at the Loudoun game, and it felt like we were second to the loose balls in that game. Tonight, it felt like we were in good areas to win those loose balls. I think Albert Dikwa deserves a lot of credit. He’s getting around their center backs and making life hard for them.”

The result also provided an important marker for Pittsburgh, which took a firm hold on second place in the Atlantic Division’s standings with its win. One-third of the way through the season, the Hounds are in a strong position when it comes to not only returning to the postseason again, but potentially challenging the Rowdies for the division lead further down the line. 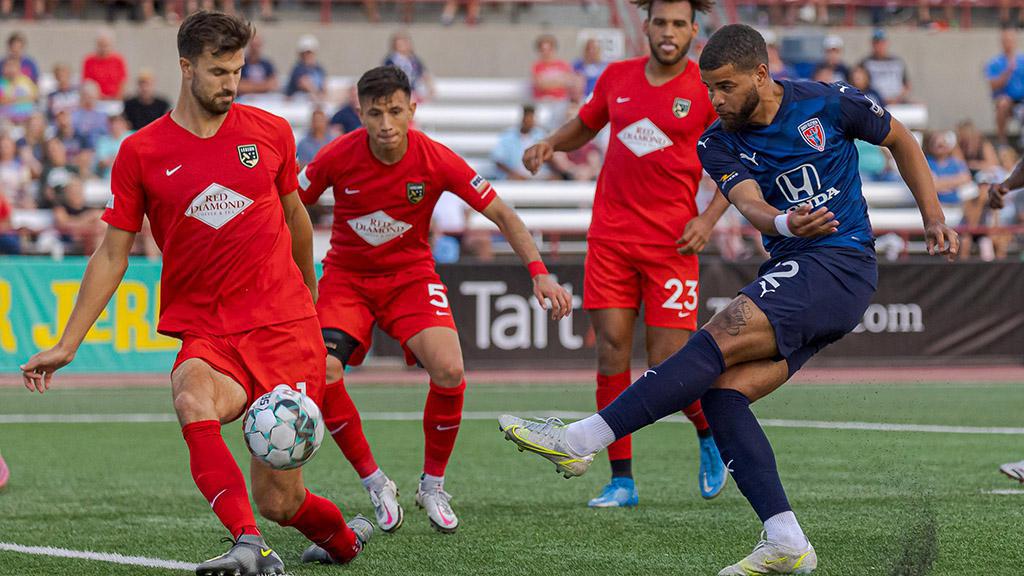 Holding a halftime lead thanks to Neco Brett’s early penalty kick, Birmingham Legion FC knew to expect a reaction from Indy Eleven on Saturday night at Michael A. Carroll Stadium, where the hosts had won only once in five prior outings this season putting the Boys in Blue in major need of a turnaround to help its postseason chances.

Despite being outshot 9-3 in the second half, however, Legion FC’s defensive organization and another stellar display by goalkeeper Matt VanOekel preserved a 1-0 victory that returned Birmingham to the top of the Central Division as it posted a fifth shutout in 11 games this season.

“You know Indy are a really good team. They’re really good with the ball, especially the second half they had a lot of the ball,” said Legion FC assistant coach Khano Smith after the game. “We just had to dig deep and protect the win. I think everyone, and it starts from the front line to the backline, right through the midfield and down to Matt [VanOekel], everyone was good. They did their part and dug deep when they really needed to.”

Legion FC is starting to build a two-horse race with Louisville City FC with one-third of the season complete with FC Tulsa now six points off the pace after its scoreless draw with OKC Energy FC on Friday night. The combination of Brett’s goals – the Jamaican now has eight of the side’s 11 this season – and a staunch back line is a very good foundation to be building on.

You’re never too old to learn, and while Kyle Greig’s knowledge of how to find the net was a big plus for Louisville City FC when they picked up the veteran forward after a glut of early-season injuries, the 30-year-old picked up the slack for the side’s attack on Friday night with Cameron Lancaster sidelined with a concussion. Greig’s two goals in a 4-2 victory against Sporting Kansas City II moved him to 60 regular-season goals for his career as he continued to build on what he and Lancaster have worked on together in training since his arrival.

“Cam and I have a really good relationship and really try to learn from one another and pick each other’s brain,” said Greig on Friday night. “We’re at that point where we’re still absorbing and learning as much as we can to be successful on the field.”

Greig has now bagged three goals in 437 minutes of action since arriving in Louisville, a solid strike rage of a goal every 145.7 minutes that complements the rest of the attacking pieces Louisville has in the fold. That attack has ramped up over its current five-game undefeated streak with 20 goals, making LouCity once again one of the most formidable attacks in the Championship as each player pushes the other forward.

“I’m trying to take advantage of all the opportunities I get on the field,” said Greig. “Whether it’s starting or coming off the bench when Cam is healthy, or whatever it may be, but having that healthy competition when he is healthy is really good for both of us because it raises both of our games to another level, helps the team, makes the coach’s decision really difficult.”

At some point, Miami FC must feel like the bad dream it is experiencing has to end, and the side will metaphorically wake up and see the goals start flowing in. On Friday night in-between lightning at MSU Soccer Park against the New York Red Bulls II, it was a familiar story for this season once again. The visitors recorded eight shots on target to two for their hosts, produced an Expected Goals mark above 2.00xG and came away with just a 1-1 draw that kept the side below the playoff line in the Atlantic Division.

“It’s another game where we’ve had 20 shots, a lot of them from inside the box, big chances,” said Miami Head Coach Paul Dalglish. “There’s so many positives from the performance, but unless we take our chances these game are always going to be close because the division’s really, really tight.”

Finishing isn’t a be-all and end-all impediment to success in the Championship. Central Division leader Birmingham Legion FC sports a lower shot conversion rate than Miami’s 12.2 percent, but what Legion FC has in its favor is an airtight defense that has helped stifle opponents so far this season. Miami’s schedule the rest of July – which sees it not only face Tampa Bay twice but also Hartford Athletic, is going to be a serious test of its playoff credentials as it approaches the midway point of its regular season.