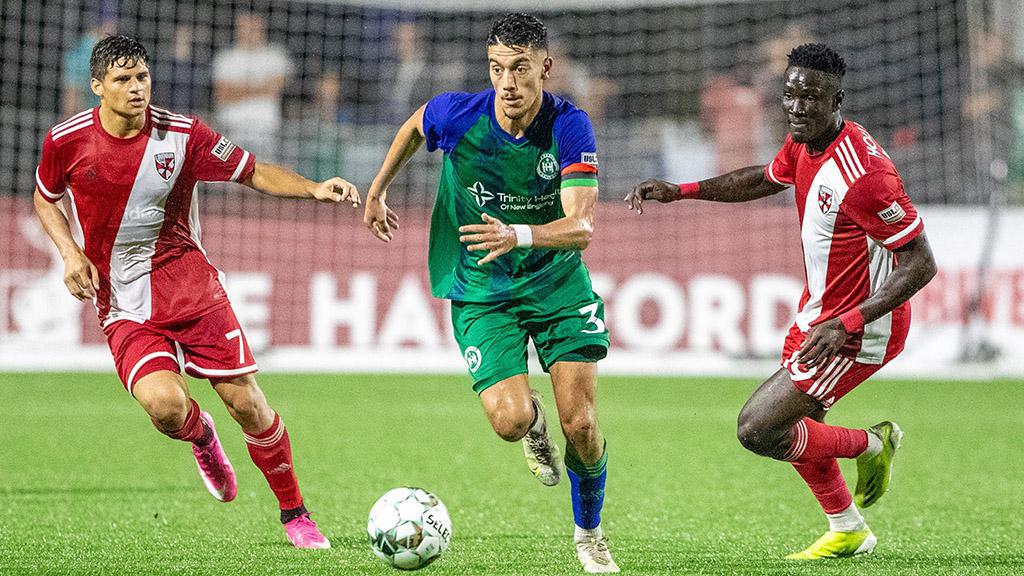 Hartford Athletic took a 2-1 victory against Loudoun United FC when the sides first met this season, but Loudoun is coming off victory last time out as the sides square off at Segra Field on Sunday evening. | Photo courtesy Hartford Athletic

LEESBURG, Va. – Loudoun United FC will look to build on its second victory of the season as it plays host to Hartford Athletic on Sunday evening at Segra Field in the second meeting between the clubs this season. Kickoff is scheduled for 5 p.m. ET.

@LoudounUnitedFC (2-7-0, 6pts) took a 2-1 victory against Pittsburgh Riverhounds SC on Wednesday night at Segra Field as goals by Ted Ku-DiPietro and Jovanny Bolivar snapped a five-game losing streak. The win was Loudoun’s first at Segra Field this season, with its lone prior victory having come on the road against New Mexico United on May 29. Midfield standout Jeremy Garay was on Friday introduced as the newest Homegrown Player signing by D.C. United of Major League Soccer. Garay is tied for 10th in the Championship this season with 19 key passes and also ranks fourth in the league with 628 passes attempted, completing 552 for a passing accuracy rate of 87.9 percent, but could be absent for Loudoun for the first time this season after his move into the top flight.

@HFDAthletic (4-2-1, 13pts) on the other hand is looking to rebound from only its second loss of the season last Saturday night as it fell 1-0 to Atlantic Division leaders the Tampa Bay Rowdies. Hartford put up a strong showing against the Rowdies at Dillon Stadium, but a missed penalty kick and other near-misses – including a chance that was cleared off the line – allowed Tampa Bay to come away with victory. Hartford is set to be without winger Walmer Martinez on Sunday after he joined El Salvador’s Men’s National Team for its pre-Gold Cup preparations, but forward Juan Carlos Obregon Jr. will be available after on Friday being named to Honduras’ squad for the Men’s Soccer tournament at the 2020 Toyko Summer Olympics. The Athletic will be hoping for a repeat result from its 2-1 win at Dillon Stadium when these sides last met on June 19 in what proved a hard-fought contest that was decided in second-half stoppage time by Nicolas Cardona’s first goal for the club.