TAMPA, Fla. – The USL Championship announced the Team of the Week Presented by Cleer Audio for Week 10 of the 2021 regular season on Tuesday, with Colorado Springs Switchbacks FC’s Hadji Barry being voted Player of the Week after recording four goals across a pair of victories during the week’s action.

Barry became the first player to reach double-digit goals this season during Week 10, opening with a two-goal performance on Tuesday night as the Switchbacks claimed a 3-2 victory against Austin Bold FC. The Guinean forward then added another pair of goals in Colorado Springs’ 3-1 victory against New Mexico United on Friday night at Weidner Field, a result that moved the side into third place in the Championship’s Mountain Division and gave Barry goals in seven consecutive contests, one shy of his own league record for consecutive games with a goal set in 2018 when he played for Sporting Kansas City II.

Barry earned 67 percent of the ballot to claim the honor. FC Tulsa’s Rodrigo da Costa finished second on 17 percent after scoring both goals in his side’s 2-1 victory on the road against Rio Grande Valley FC on Friday night. 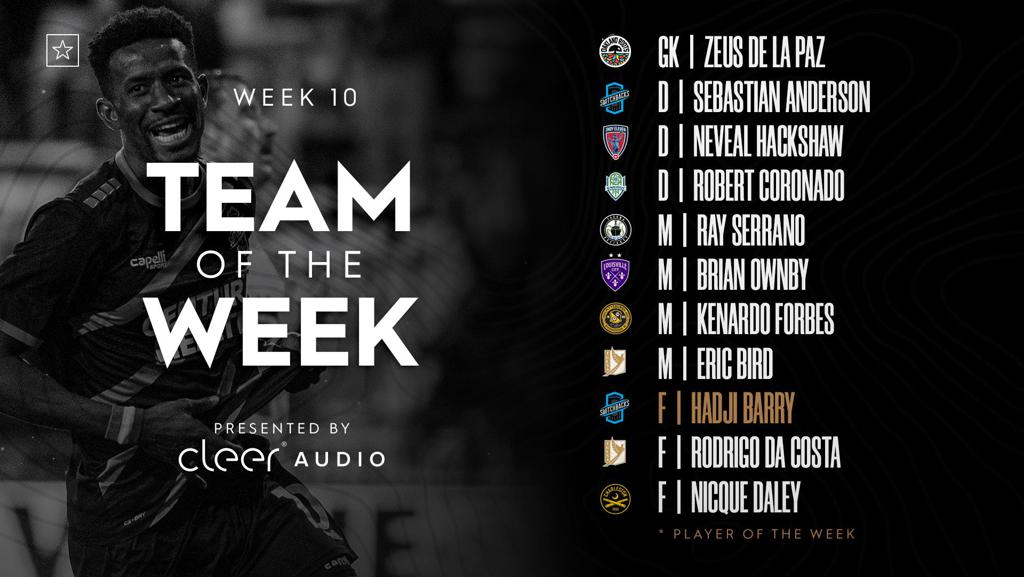 GK – Zeus De La Paz, Oakland Roots SC: The Curacao international recorded a six-save shutout on Saturday night to earn his side a point in a scoreless draw against Austin Bold FC.

D – Sebastian Anderson, Colorado Springs Switchbacks FC: The U.S. youth international had an impressive pair of performances for the Switchbacks, recording one assist and winning 8 of 10 tackles to help the side claim a pair of victories.

M – Brian Ownby, Louisville City FC: Brian Ownby was phenomenal on the right flank for Louisville in its 3-3 draw with Indy Eleven, recording a pair of assists and eight key passes in the contest while completing 24 of 31 passes.

M – Kenardo Forbes, Pittsburgh Riverhounds SC: Kenardo Forbes tied Pittsburgh’s record for most assists at the club with his 27th helper in its colors while also recording three key passes and completing 43 of 58 passes overall in the Hounds’ 2-1 win against the New York Red Bulls II.

M – Eric Bird, FC Tulsa: Eric Bird won 5 of 5 tackles and 9 of 14 duels while also making 11 recoveries and six interceptions in a stellar display in the center of midfield to help Tulsa claim a 2-1 road victory against Rio Grande Valley FC on Friday night.

F – Nicque Daley, Charleston Battery: Nicque Daley scored a pair of goals in the Battery’s 3-0 win against Loudoun United FC and completed 4 of 5 dribbles while finishing with four shots overall for the contest.