BY THE NUMBERS – The USL Championship’s First 10,000 Goals

Charleston's Zarokostas recorded the landmark tally on Saturday night, but how did we get here over the league’s first 11 seasons? 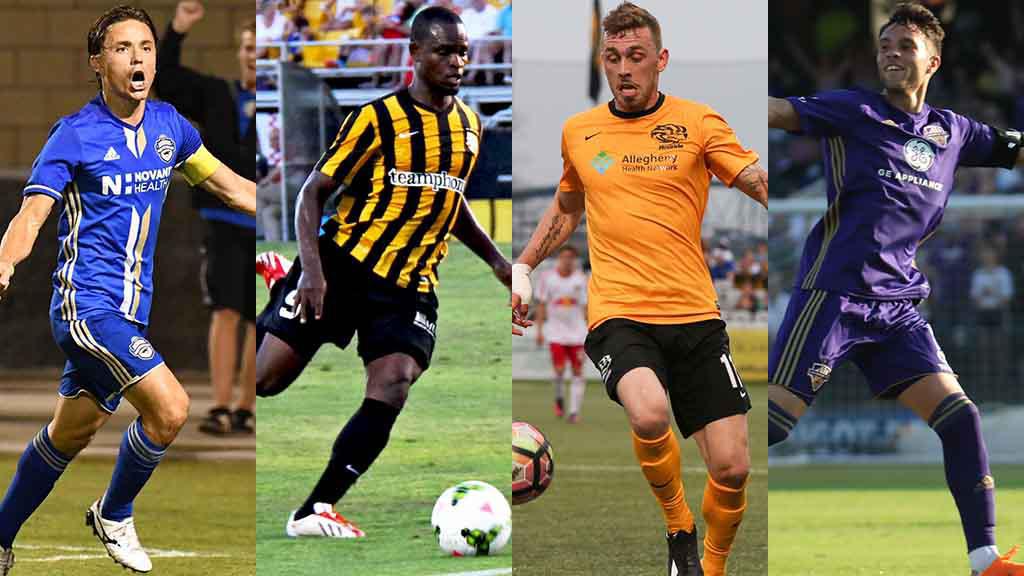 Jorge Herrera, Dane Kelly, Corey Hertzog and Cameron Lancaster have been among the notable goalscorers in the USL Championship's history, and on Saturday night the league reached 10,000 goals in its history.

Saturday night brought a landmark moment to the USL Championship as the 10,000th regular-season goal in league history arrived thanks to Stavros Zarokostas of the Charleston Battery, who opened the scoring in his side's 3-0 victory against Loudoun United FC at Patriots Point. Landing in the Championship’s 11th season, the mark has been rapidly coming into view over the past two years, with the league this season averaging 2.76 goals per game with more than 350 tallies already notched this season.

Among them we’ve witnessed the sublime, and the ridiculous. From Stanley Nyazamba recording the first goal in league history in the Richmond Kickers’ 2-0 win against Orlando City SC back in April 2011 to the SportsCenter Top 10 moments that have regularly arrived in more recent years, and the legends of the game that have made their mark as well, the league has grown in both the quantity and quality of player that now grace its fields.

Here’s a look back at some of the memorable moments, key numbers and record-holders that saw us reach this point in our history.

418 – Coming in at the top of the list in the league’s scoring chart is Orange County SC, which has recorded 418 regular-season goals in its history. As one of the three clubs to be part of the Championship since its inception alongside the Charleston Battery (404 goals) and Pittsburgh Riverhounds SC (388 goals), Orange County has proved the most prolific. Those goals have come from a wide array of players, too, with Michael Seaton sitting on top of the all-time regular-season list with 24 goals for the club, one ahead of Aodhan Quinn’s 23 before Chris Cortez (21), Thomas Enevoldsen (20) and Didier Crettenand (16) round out the list.

92 – You probably all know this one. There’s been no more prolific individual goalscorer in the Championship’s history than current Charlotte Independence forward Dane Kelly and his 92 career regular-season goals. Kelly has scored in every season of the league’s history dating back to 2011 with the Charleston Battery, including one on loan with the Richmond Kickers in 2018 when he was signed by D.C. United. The Jamaican international – who was last week included in the Reggae Boyz’s preliminary roster for the 2021 Concacaf Gold Cup – also lead the Championship all time with four hat tricks in the regular season, and logged 42 goals for the Charleston Battery, and the rest with Reno 1868 FC (18), the Independence (15), Indy Eleven (10), Sporting Kansas City II (6) and the Kickers (1).

51 – While Kelly has been the most prolific in the Championship during his career, Cameron Lancaster holds the crown for the most regular-season goals for a single club, having this season surpassed 50 in Louisville City FC’s colors, one of only two players to reach that landmark in league history. The other is Sacramento Republic FC’s Cameron Iwasa, who currently sits on 50 goals in Old Glory Red in his regular season career, with Phoenix Rising FC’s Solomon Asante in third place on 47 goals for the only club he’s played for in the league.

6 – Dane Kelly is the only player to have scored in every season in the Championship’s history, but he’s joined by three more of the league’s all-time leaders in the number of clubs he’s scored for over the years. The trio of Corey Hertzog, Chandler Hoffman and Kyle Greig have also recorded goals for six different sides in the Championship during their careers at clubs across the country.

There have been two other players that have scored for six different clubs in the league’s history, to lesser prolificacy, those being former San Antonio FC and Las Vegas Lights FC forward Carlos Alvarez and current Miami FC forward Christiano Francois.

89 – It’s still remarkable to think about what Phoenix Rising FC accomplished during the 2019 Championship regular season. Its 89 goals – an average of 2.62 per game over the 34-game slate – was easily the highest total in the league’s history as 14 different players found the back of the net. Leading the way was the trio of Solomon Asante (22 goals), Adam Jahn (17 goals) and Junior Flemmings (15 goals), who accounted for 61 percent of the tallies and could be the lone trio of teammates to register at least 15 goals apiece in Championship history for a while. What might be the most notable thing about Rising FC’s season? While Asante had five two-goal games and both Jahn and Flemmings three apiece, no Phoenix player recorded a hat trick over the 34 games.

25 – Going into the 2018 USL Championship season, there had been glimpses of the quality Cameron Lancaster possessed, but nothing like what was about to happen. The former Tottenham Hotspur player put on a season for the ages with 25 goals in 30 appearances – more than doubling his career total in the Championship in the process – while averaging a goal every 80.2 minutes of action. Lancaster is now closing in on the top five in the Championship’s all-time list as he sits two behind current teammate Kyle Greig, with that season the launching point for what has become a stellar overall career in the league.

9 – Reno 1868 FC’s inaugural season was one for the record books, including the most goals scored in a regular season at that point of the league’s history. Led by Dane Kelly, who claimed the Championship’s Golden Boot for the first time with 18 goals, the side overseen by Head Coach Ian Russell was an attacking force, and no more so than on July 3, 2017 as it set the Championship record for goals in a game in a 9-0 win against the LA Galaxy II. Six different players from Reno found the scoresheet – seven overall if you include unfortunate Los Dos player Robert Castellanos, who opened the scoring with an own goal in the third minute – with Jordan Murrell and Chris Wehan both scoring twice. Darwin Espinal set the record with two minutes to go, capping the fireworks on the field the night before the Fourth of July.

8 – Sometimes, a player will just get hot. That’s the way it was for Sporting Kansas City II’s Hadji Barry on August 19, 2018, when he started scoring and for more than a month couldn’t stop. Barry’s record of eight consecutive games with a goal that concluded on September 22, 2018 has been challenged in the past three years – most recently by Phoenix Rising FC’s Santi Moar, who got to seven before seeing his streak snapped earlier this month – but the Guinean forward has held the crown for one of the most remarkable runs in league history, and is now challenging that mark himself with a streak of goals in seven consecutive games for current club Colorado Springs Switchbacks FC that continued this past Friday night.

SIX OF THE BEST

Hartford Athletic’s Conor McGlynn may have been the most recent example of a goal scored from inside a player’s own half, but six years ago it was Rodrigo Lopez that pulled off the feat in front of a packed house at what is now Heart Health Park to cement his status as one of the league’s biggest stars. Coming off a season in which he earned USL Championship Final MVP honors in leading Sacramento to a title in its first campaign, Lopez’s goal went viral, appearing on soccer websites around the world.

Miguel Gonzalez’s bicycle kick off Michael Harris’ flip throw for Energy FC was a landmark moment for the Championship beyond its own brilliance. While there had been others land on the ESPN SportsCenter Top 10 before, this was the first time a goal from the Championship earned the No. 1 spot in the countdown, with the contest having aired as the first USL on ESPN Game of the Week on ESPN3 in the 2017 season earlier in the evening.

The Tampa Bay Rowdies joined the Championship in 2017 and brought with them a star-studded lineup that included former England international Joe Cole and German midfielder Marcel Schafer, whose career had seen him feature for VfL Wolfsburg as it claimed the Bundesliga in 2008-09 and compete for Die Mannschaft internationally. That quality was on show in the Rowdies’ trip to FC Cincinnati that saw Schafer unleash a spectacular 40-yard shot that officially put the league on notice as the German went on to be named to the Championship’s All-League Team at the end of the season.

There had been big names in the Championship before, but when Didier Drogba arrived at Phoenix Rising FC in 2017 – not only to be part of Rising FC’s ownership group but to play in the league – it was a defining moment for the club and the league. And what’s more, the UEFA Champions League-winner showed he still had all the quality his career had been known for, including this spectacular free kick from 40 yards out against FC Tulsa at ONEOK Field.

Cameron Lancaster has produced some incredible moments in the Championship over his career – the late game-winning goal in the 2017 USL Championship Final immediately springs to mind among others – but in the 2018 season the English forward was chasing history and delivered it in outstanding fashion. Tied for the single-season mark for the most regular-season goals with former LouCity forward Matt Fondy on 22 goals as action kicked off against NCFC, Lancaster delivered No. 23 with a brilliant turning hit from 30 yards that put his name at the top of the list in the Championship’s Record Book.

There’s something remarkable about the way a player can sometimes rise to the occasion, and that was certainly the case for Indy Eleven’s Tyler Pasher as he earned his side not only a dramatic victory on the road against Pittsburgh Riverhounds SC on national television but did so in about as spectacular a fashion as you could hope for. Pasher’s weaving run from the halfway line capped by a brilliant finish to the top-left corner of the net from 25 yards out was as good a goal as you could hope to see decide a game.