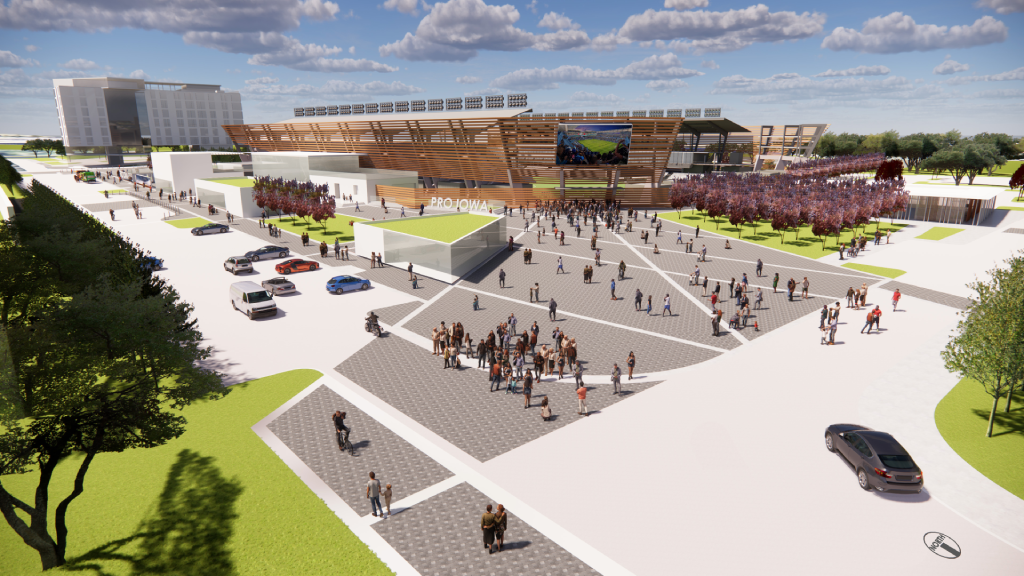 DES MOINES, Iowa – The arrival of professional soccer in Des Moines, Iowa took a major step forward to becoming reality on Friday as the Iowa Economic Development Authority (IEDA) awarded the City of Des Moines $23.5 million toward the Capital City Reinvestment District, which includes the Pro Iowa Stadium and Global Plaza. This announcement marks the second week in a row that the initiative has received positive fundraising commitments.

Pro Iowa is aiming to bring a USL Championship club to Des Moines, with the soccer-specific stadium that would become the club’s home set to be the centerpiece of a 65-acre, $535 million overall development. The group is aiming to join the Championship for the 2024 season, with Friday’s IEDA financial award a key step in that process.

“We are delighted the IEDA board envisions the potential these projects will add to the state’s reputation as a destination rich in attractions ranging from cultural celebrations to sporting events,” said Jerry Haberman, president of Krause+, the developer of several projects included within the Capital City Reinvestment District.

The Iowa Reinvestment Act (IRA) allows for new state hotel/motel taxes, as well as state sales taxes collected on new developments to be funneled back to cities to support visionary projects across Iowa. The IRA funds awarded to Des Moines for the Capital City Reinvestment District will be used to offset construction costs of the Pro Iowa Stadium and Global Plaza. Over $500 million in additional development of housing, retail and office uses is expected in the adjacent area.

The Iowa Soccer Development Foundation, the local nonprofit in charge of the fundraising efforts for the Pro Iowa Stadium and Global Plaza, has raised $19.6 million in private contributions, including a recent $5 million commitment from American Equity Investment Life Insurance Company, for development of the proposed $83.5 million stadium and Global Plaza. With the IRA commitment, the Iowa Soccer Development Foundation has now raised more than $43 million through private and public funding. Construction is anticipated to begin in October with a first professional soccer kickoff slated for the state of Iowa in 2024.

“City leaders have worked to make this vision a reality,” said Matt Anderson, deputy city manager of Des Moines. “This support illustrates the impact the project will have on our city, not only through redevelopment of a long-standing eyesore that is the Dico Superfund site, but through the creation of a community connector that bridges neighborhoods and creates access to some of our state’s most popular landmarks. We appreciate the allocation from IEDA and are proud to be their partner in bringing additional vitality to the capital city of Iowa.”

Pro Iowa has already begun investing in local soccer opportunities within the state, having earlier this month unveiled the first dual mini-pitch complex at Linnan Park in Clive, Iowa in partnership with Kick It Forward and Musco Lighting. The facility, which is open for public use, is one of 10 that the group is planning to construct in seven cities around the state, offering the opportunity for more access to play.

“We are thrilled to see this support from IEDA,” said Mayor Frank Cownie. “We know this project is going to be transformational for our downtown, the metro area and the state. Professional soccer, as well as the many other activities that will be held in this stadium, will be yet one more exciting recreation choice for the residents and visitors to our city.”