TAMPA, Fla. – The USL Championship announced the Team of the Week Presented by Cleer Audio for Week 9 of the 2021 regular season on Tuesday, with Louisville City FC’s Cameron Lancaster voted Player of the Week after he led his side to a two-win week with three goals that moved LouCity to the top of the Championship’s Central Division.

One of the league’s most prolific scorers in the past five seasons, Lancaster scored the opening goal in Louisville’s 2-0 victory against previous Central Division leader Birmingham Legion FC on Wednesday night at Lynn Family Stadium. He then added a pair of goals in a 3-2 win against FC Tulsa on Saturday night at ONEOK Field, including a spectacular Olimpico in the second minute from a corner kick on the left side that picked out the top-right corner of the net despite being shot into the prevailing breeze.

Lancaster earned 27 percent of the ballot for his performances in a remarkably competitive week of action. Both Memphis 901 FC’s Mark Segbers – who recorded a crucial stoppage-time save as an emergency goalkeeper in a 1-0 win against Atlanta United on Wednesday night – and San Diego Loyal SC’s Jack Blake – whose pair of long-range finishes led SD Loyal to a 2-1 win against Phoenix Rising FC – finished tied for second on 23 percent, while Colorado Springs Switchbacks FC’s Hadji Barry – who had one goal and three assists in a 4-2 win against Tacoma Defiance – finished on 18 percent. 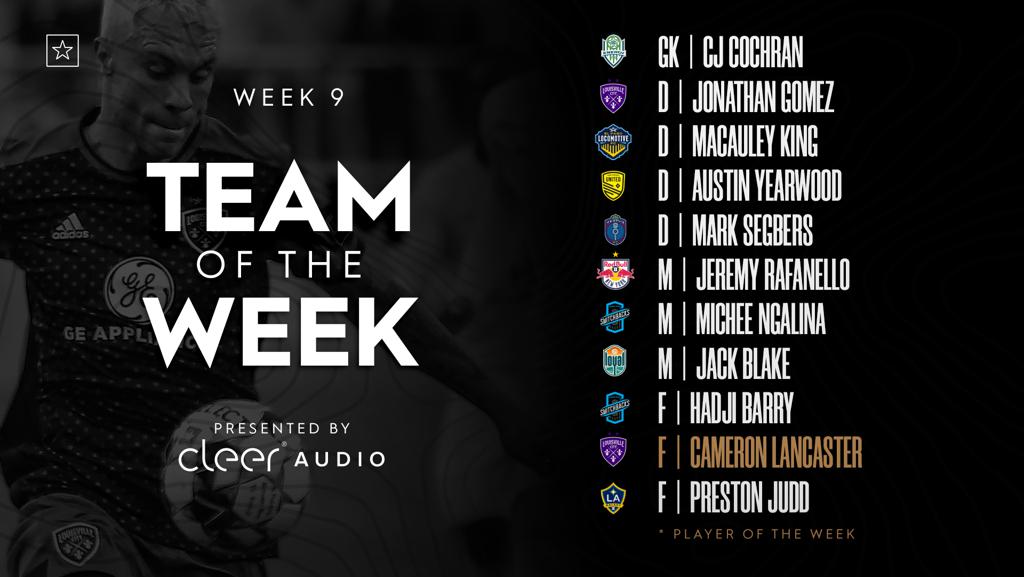 GK – CJ Cochran, OKC Energy FC: CJ Cochran recorded a seven-save shutout to help Energy FC earn its first victory of the 2021 season on Saturday night in a 1-0 win on the road against Memphis 901 FC.

D – Jonathan Gomez, Louisville City FC: Named to the United States’ preliminary Gold Cup roster on Friday, Jonathan Gomez recorded a goal and assist across LouCity’s two games in the week, completed 56 of 69 passes and made seven interceptions and 11 recoveries.

D – Macauley King, El Paso Locomotive FC: Macauley King continued his strong run of form with what proved to be the game-winning goal in El Paso’s 2-1 win against Real Monarchs SLC, while also completing 39 of 47 passes and winning 4 of 6 duels.

D – Mark Segbers, Memphis 901 FC: Mark Segbers made a crucial late-game save as an emergency goalkeeper for 901 FC against Atlanta United 2 to preserve the side’s 1-0 victory in its home opener at AutoZone Park.

F – Hadji Barry, Colorado Springs Switchbacks FC: Hadji Barry became the second player this season – and fifth all-time in the Championship’s regular season – to record at least one goal and three assists in a game as he led the Switchbacks to a 4-2 win against Tacoma Defiance.