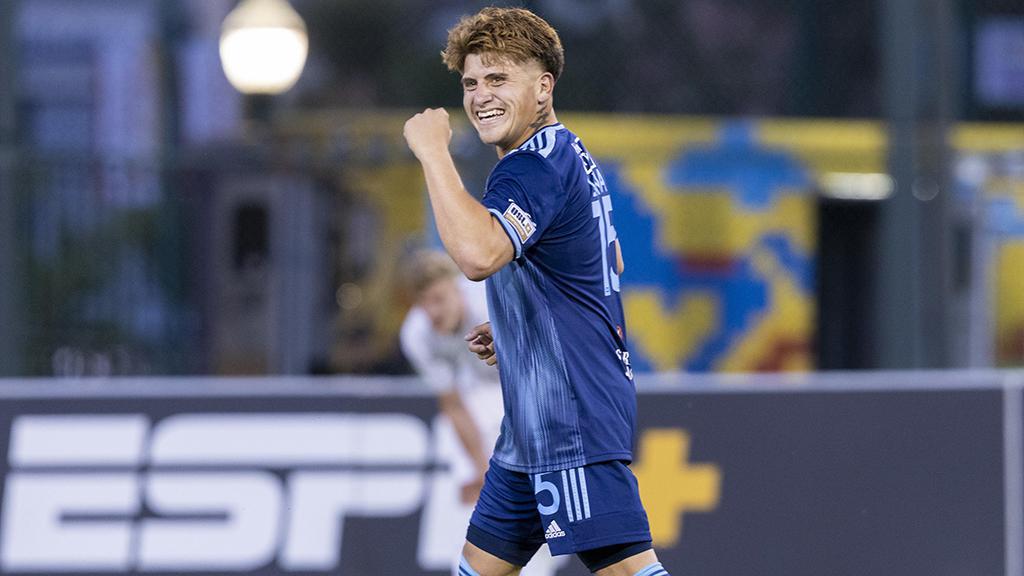 In the middle of a veteran and experienced lineup, 17-year-old Diego Luna is gaining more of the spotlight, and produced a stellar display on Friday night against Real Monarchs SLC. | File photo courtesy Ivan Pierre Aguirre / El Paso Locomotive FC

The weekend produced some notable individual and team performances in the USL Championship’s Western Conference, led by another 17-year-old standout and a side showing the resilience its newly acquired experience has added. Here are five talking points we took away from the action.

There’s one 17-year-old drawing plenty of attention in the Eastern Conference in Louisville City FC’s Jonathan Gomez – and rightly so given his precocious abilities – but the Western Conference also has its own young prodigy to keep an eye on in El Paso Locomotive FC’s Diego Luna, who again put on a stellar display on Friday night in his side’s 2-1 victory away at Real Monarchs SLC.

Luna played a role in both goals – providing the initial cross for Bryam Rebellon’s header back across goal for Josue Aaron Gomez to finish after just 58 seconds before delivering the assist on Macauley King’s second-half insurance marker – but also completed 29 of 31 passes overall, had three key passes and won 4 of 7 duels in midfield. What has marked Luna’s ability, though, has been his ability to link into the concepts that have made Locomotive FC successful over its first two seasons, as seen in this attacking build-up.

Another bit on Luna. Checks into Rebellon here, pulling a defender with him and releases the full back into space. Monarchs' defense is discombobulated because of Luna's movement and pass, and it takes a great save to deny Solignac an @eplocomotivefc goal.#SLCvELP #VamosLocos pic.twitter.com/72B34zCyKO

Locomotive FC has seen strong performances all over the field in its seven-game undefeated run to start the new season – which now has the side only two points off first place with two games in hand on Rio Grande Valley FC after this weekend’s results. Luna’s play is going to be one to keep an eye on as he progresses through his first professional season, and that could help carry the side to further success.

In professional hockey, there are times a Head Coach will pull his goaltender from a contest with the aim of trying to wake up the rest of the team from a lackadaisical performance. That might not have been the intent behind Braeden Cloutier’s decision on Saturday night to replace starter Patrick Rakovsky with Abraham Romero at halftime of his side’s visit to face Las Vegas Lights FC, but it sure seemed to have the desired effect.

After going in down a goal thanks to Lights FC’s Roberto Molina’s late strike in the first half, Orange County had turned things around within the opening five minutes of the second half as Ronaldo Damus continued his recent run of form with a pair of goals, paving the way to a 3-1 victory that moved the side within three points of Phoenix Rising FC at the top of the Pacific Division standings. Damus – who on Friday was named to Haiti’s preliminary roster for the 2021 Concacaf Gold Cup – has now scored five goals in the past four games, showing an acclimation to the Championship after his prior success in League One.

If Damus is showing out in attack, the manner Orange County produced its goals on Saturday night was also somewhat unique for a team known for knocking the ball around when in possession. Two of them – including Rob Kiernan’s late insurance goal – came directly from long throw-ins from the right from both Kevin Alston and Brent Richards, while Alston’s sharp delivery set up Damus’ second of the game. The ability both Alston and Richards have to deliver from the touchline is an intriguing one, especially against sides with narrower playing surfaces such as Las Vegas – and could be something other opponents have to factor for moving forward. 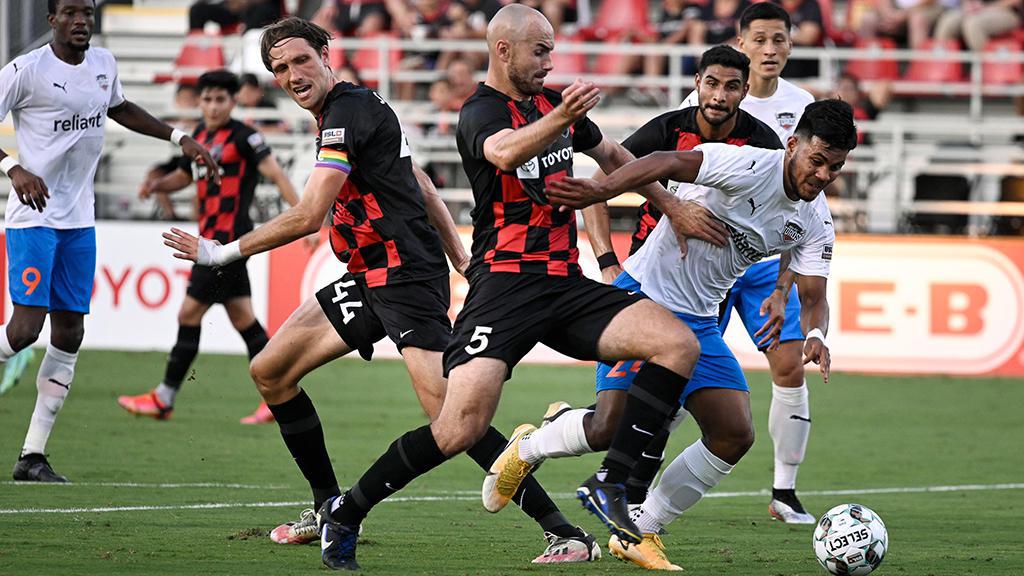 San Antonio FC and Rio Grande Valley FC battled to a second consecutive 1-1 draw at Toyota Field on Saturday night that saw the hosts continue to struggle to put the ball on target in the final third at Toyota Field. | Photo courtesy Darren Abate / San An

It was another frustrating night for San Antonio FC on Saturday as it was held to a 1-1 draw by South Texas Derby rival Rio Grande Valley FC while once again proving unable to take advantage of its opportunities in front of goal. The lone shot on target for the hosts ended up finding the net as Justin Dhillon scored his second goal in three games, but after the Toros equalized midway through the second half there was little joy to be found for the hosts at Toyota Field the rest of the way.

That’s been the way it’s been going for San Antonio recently, with the side having recorded four goals over a now five-game winless streak that has dropped the side out of the playoff positions in the Mountain Division. San Antonio’s shooting accuracy rate of 41.9 percent is fourth-lowest in the Championship, while its passing accuracy rate of 66.8 percent sits as the lowest in the league. It’s not that the side isn’t producing chances, either; San Antonio has recorded the fourth-most shots in the league with 121. That’s at least a glimmer of hope that the tide will turn eventually for the side, just as it did recently for Louisville City FC in its current three-game winning streak.

“We have a system here that we trust in and we trust in our coaches,” said SAFC midfielder Ollie Wright, who provided the assist on Dhillon’s goal on Saturday. “It’s showing on the field because we are getting our chances. We have faith that sooner or later those chances will be going in the back of the net. It’s a matter of staying strong, staying resilient and keeping that trust in ourselves.”

If you take the flipside of this column on San Diego Loyal SC and Jack Blake’s performance on Saturday night, it seems awfully unfortunate that Phoenix Rising FC didn’t come away with something from its first visit to Torero Stadium of the season. The visitors outshot their guests by a 3-to-1 margin, had an Expected Goals edge of more than 2.00xG, and under the metrics of the game should have expected an average return of 2.69 points.

Instead, Rising FC suffered its second defeat of the season as the hosts won 2-1, but the overall display was a net positive for Phoenix Head Coach Rick Schantz.

“I actually thought we did well. I thought the guys were fantastic. They stuck to the gameplan,” Schantz told reporter Owain Evans after the game. “The problem is when you play a little conservative, if you make a mistake and you don’t train properly, you get punished like that then you have to come out.

“I think for us to play that way, we’re not used to it. But I thought that the guys did an excellent job. We showed that we have the ability to close the middle down a little bit, they showed some danger. After the second goal, I was really pleased with the tempo of the game.”

Part of the beauty of the games, of course, is that it doesn’t always work out the way it should. Phoenix heads to Sacramento Republic FC next weekend and will be hoping for better fortunes then.

It might not always be the most reliable metric to use, but the fact that during the 2020 Championship regular-season Rio Grande Valley FC only rallied to claim one point while allowing five points to slip away after it held a lead spoke to the fragility of the side over the course of the season. And after suffering a heartbreaking midweek defeat at the hands of Austin Bold FC on Wednesday night, conceding early to San Antonio FC was a tough start at a difficult place to play.

But these Toros are built different, and they showed their resolve to not only earn a 1-1 draw thanks to a find pass and finish from Elvis Amoh and Christian Sorto respectively during the first half, but then to outbattle their hosts for the remainder of the contest. Led by Juan Cabezas – who won 16 of 20 duels individually – the visitors won 67 of 109 duels overall (61.5 percent) and also won 19 of 26 tackles while completing 83 percent of its passes. The Toros are currently a +2 in their points gained/points lost differential this season, and their new solidity is a central reason why.