Pittsburgh’s plan comes off in Tampa Bay; Charleston gets local hero in victory vs. Miami 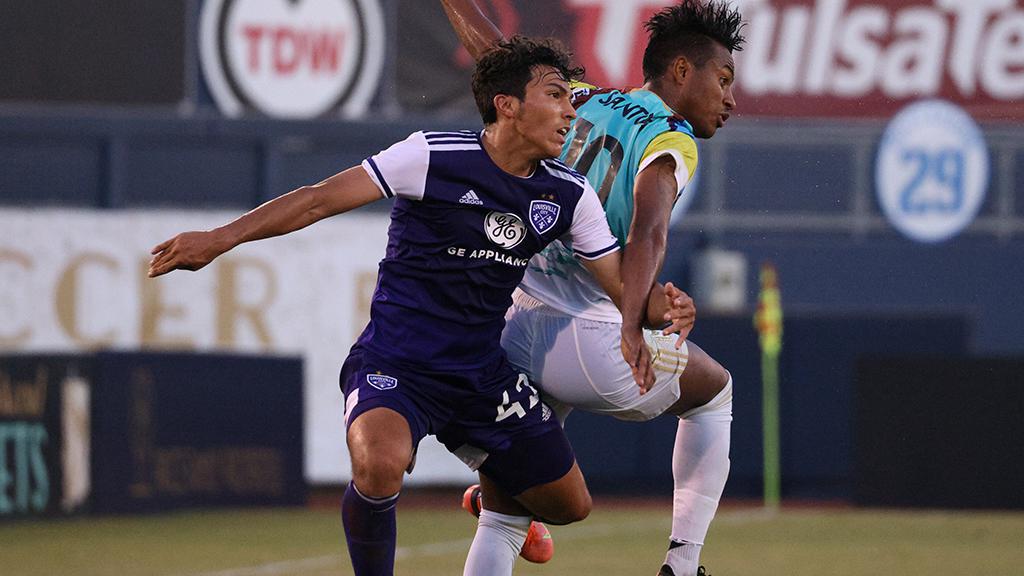 Jonathan Gomez's first goal in the professional ranks for Louisville City FC was just one of the early highlights in the side's 3-2 victory against FC Tulsa on Saturday night. | Photo courtesy FC Tulsa

The USL Championship’s Eastern Conference produced some more fascinating results as the regular season reached one-third complete at the end of Week 9 this weekend, here are five key takeaways we got from the action.

If you weren’t promptly in your seat or in front of your screen on Saturday night for Louisville City FC’s visit to FC Tulsa, well, you probably missed the latest contender for the Championship’s Goal of the Year competition from LouCity’s Cameron Lancaster, and potentially a whole lot more.

The second Olimpico we’ve seen this season after Miami FC’s Pierre Da Silva pulled off a similar feat against Rio Grande Valley FC a few weeks ago, Lancaster delivered a brilliant effort from the left corner to the top-right section of the goal that left Tulsa goalkeeper Sean Lewis unable to gather, such was the power and precision with which the ball was hit.

“We wrote it up beforehand,” Lancaster said of his opening goal. “We had a look at the pitch, and we saw it was quite tight — quite narrow. We practiced it before, and Danny said why not give it a go for the first corner? We got the first corner pretty early in the game. I went for it, and thankfully it came off.”

Lancaster’s strike was followed by another notable moment as Jonathan Gomez – on Friday named in the U.S. Men’s National Team’s preliminary roster for the 2021 Concacaf Gold Cup – scored his first professional goal before Lancaster capped a 10-minute flurry with his second of the game from the penalty spot. Now sitting on five goals this season, the English forward is starting to take the chances that were going astray early in the year, and with the way Louisville is playing overall that should be a worry for its rivals in the Central Division as it took three wins in the span of eight days to jump past Birmingham Legion FC on Saturday.

“Difficult conditions — the field was very small, extremely hot, three games in one week — but I was so proud of the group,” said interim Head Coach Danny Cruz. “I told them at the end of the day, it’s about getting three points, and you have to be able to win games and grind games out, especially on the road. I couldn’t be more proud of them.”

HOUNDS PULL OFF PLAN TO ALMOST-PERFECTION

We mentioned here on Friday that Pittsburgh Riverhounds SC had entered the week with a plan to take on two tough road contests in one week, rotating the lineup and using smart substitutions to eke out a 1-0 victory on the road against Indy Eleven last Tuesday night before its visit to face the Tampa Bay Rowdies on Saturday. Well, that plan worked out almost perfectly as the Hounds made it a six-point week with their first road win against the Rowdies in club history thanks to goals by Danny Griffin and Russell Cicerone in a 2-1 victory at Al Lang Stadium.

Special credit should get pushed the way of Griffin and Shane Wiedt, who both went the full 90 minutes in both contests, the lone Hounds to do so. Griffin’s execution on the side’s opening goal against the Rowdies, both helping build and finishing a counterattack midway through the first half off a nice set-up by Cicerone, showed why he’s become such a valuable piece for the side in the past two seasons. While the side had to sweat things out late after Sebastian Guenzatti gave the hosts a lifeline, this was a great week for Pittsburgh overall as it handed Tampa Bay its first home loss of the season and closed the gap at the top of the Atlantic Division standings.

“It was a really good performance, our best 90 minutes of the year so far,” said Hounds Head Coach Bob Lilley. “We really limited them until the last 10 minutes and stoppage time. Obviously, it’s a big team win. The substitutes came on and helped us, and we had to put in a lot of work to get it over the finish line at the end.” 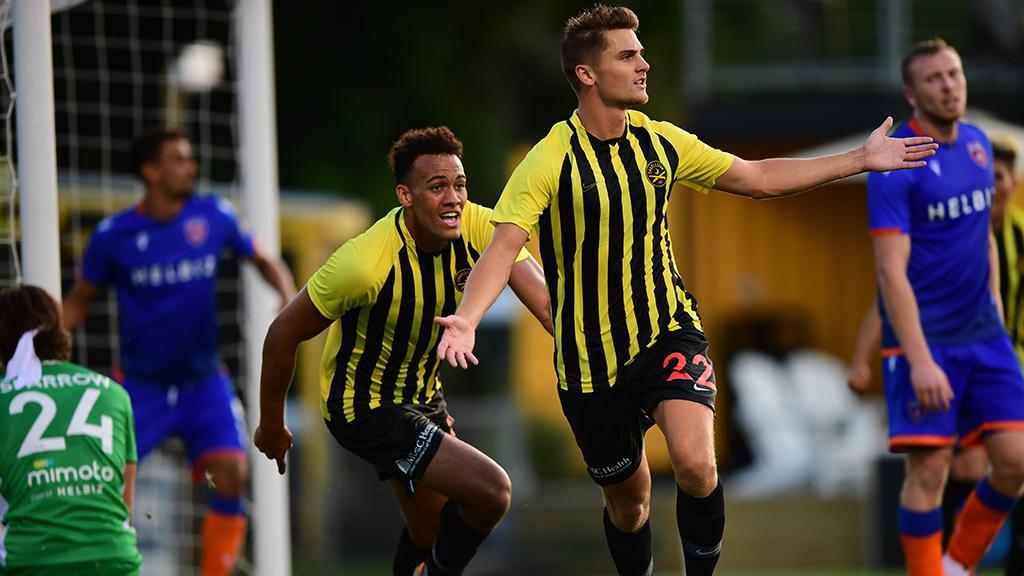 Thanks to the summer thunderstorms in the Low Country, it’s been a start-stop kind of opening to the 2021 season for the Charleston Battery. The sun shone on Patriots Point on Friday night, though, and with the good weather came one of the best stories of the season so far. Charleston native Joel Bunting – a preseason addition to the club’s roster after competing at the University of South Carolina Upstate collegiately – made his first start and scored his first goal for the club, which proved the winner in a 2-1 victory against Miami FC.

“It’s surreal and I really can’t explain it,” said Bunting. “Two months ago, I wasn’t even on the team. Just being from Charleston and working my way up, it’s amazing. AJ [Paterson] had the great cross and it was just a reaction, right off my knee and into the back of the net.”

Bunting’s finish might have been a feel-good story, but it shouldn’t go overlooked that the Battery are starting to find their feet after the choppy nature of the start to the campaign. Zeiko Lewis produced a brilliant answer to Lamar Walker’s early goal for Miami, and after the visitors made a strong start the Battery effectively closed ranks to see out a very good win.

“You know, the guys have been sitting in the locker room way more than playing, I’ll tell you that’s why we came out a little rusty at the beginning,” said Battery Head Coach Mike Anhaeuser. “But I thought they did a great job, they’re so happy to play. And now we’re going to have more games [played] every week. Two games a week, the guys just love to play.”

HARTFORD PULLS THROUGH AFTER LATE DELAY

There are times when a lightning delay in the game can work to the benefit of a side, and that certainly seemed as though it was the case for Hartford Athletic on Saturday night against Loudoun United FC at Dillon Stadium. After taking an early lead, the Athletic were subject to a barrage of shots from the visitors in the second half that finally paid off with 12 minutes to go as a handball in the penalty area allowed Jovanny Bolivar to convert from the spot, and gave Loudoun the impetus to go for the win.

As the lightning arrived in the 87th minute, United had outshot Hartford 13-4 in the second half, but Athletic Head Coach Harry Watling tried to make the most of the break and get his side refocused for the resumption.

“We showed them some clips on the TV and went through some more detailed notes, tweak the shape again,” said Watling. “For me it was two things we had to come out and go for it, we had to get the fans behind the goal to suck the ball in, and we did both of those things.”

Hartford pulled off a 2-1 victory as Nicolas Cardona’s goal in the fifth minute of stoppage time – the Puerto Rico international’s first for the club – capped a strong spell for the hosts, who were able to regain control of the contest after its resumption on a rainy night in New England.

“It was tough because this never happens, right,” said Cardona. “So, we went into the locker room and everyone was saying, there was gonna be one hero, and I was just there, Younes gave me a very good cross, ball was just there bouncing and I just put it in.”

When it’s been as long as it had for OKC Energy FC – 337 days, if we’re counting – finding a way to claim that next victory can feel awfully difficult. On Saturday night, though, the side finally broke through as goalkeeper CJ Cochran came up clutch with a seven-save shutout to lead his side to a 1-0 win against Memphis 901 FC for its first victory of 2021 and its first three points since July 17 last year when it claimed victory on the road against Austin Bold FC.

“It’s obviously exciting,” said Energy FC interim Head Coach Leigh Veidman. “It’s been a long time coming, we’ve worked extremely hard to get these three points, and you could see glimpses of it in the second half of the Indy game. You could see it in the game last week, and ultimately what it came down to was getting the job done in the 18-yard-boxes because we dominated possession last week and in the second half at Indy, and in the first half today.”

Energy FC will have to manage its next outing without the services of defender Robert Coronado – who has been arguably the side’s most consistent performer this season – after his late red card when it returns home to host Sporting Kansas City II on Wednesday night, but the side will at least have a chance to carry some positive momentum into that contest as it looks for its first win at Taft Stadium since 2019.