TAMPA, Fla. – The USL Championship announced the Team of the Week Presented by Cleer Audio for Week 8 of the 2021 regular season on Tuesday, with San Diego Loyal SC’s Alejandro Guido voted Player of the Week after he recorded a goal and assist to lead his side’s comeback 2-1 victory against the LA Galaxy II on Saturday night.

A San Diego native, Guido joined SD Loyal permanently this offseason after a loan spell from Los Angeles FC during the 2020 season. Coming on with his side trailing with 22 minutes to go, Guido made an immediate impact, first hitting the crossbar before producing an outstanding solo goal that saw him juke past one defender in the left channel before moving centrally to fire home a low shot just inside the left post to level the game. Then with six minutes to go, Guido led a counterattack down the right side and delivered a sweeping cross to the back post for Miguel Berry to head home and earn San Diego its second win of the season and extend the club’s undefeated run to four games.

Guido earned 43 percent of the ballot for his performances to earn the award. Birmingham Legion FC’s JJ Williams and Sporting Kansas City II’s Enoch Mushagalusa finished tie for second on 21 percent after Williams recorded a late game-winning goal and assist in Legion FC’s 2-1 victory against OKC Energy FC  on Saturday and Mushagalusa scored his first two goals of the season in SKC II’s 2-2 draw with Atlanta United 2 last Wednesday night. 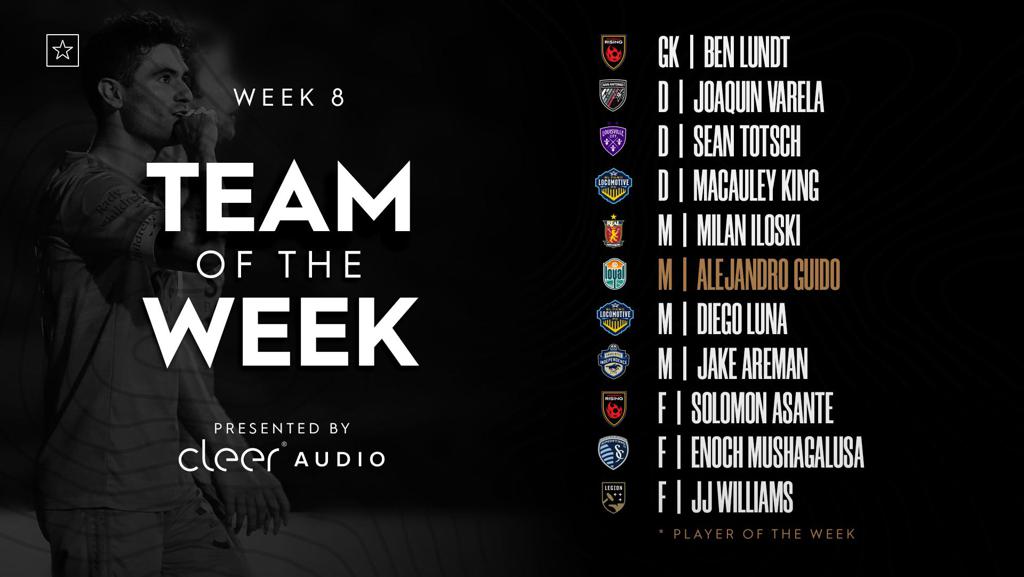 GK – Ben Lundt, Phoenix Rising FC: Ben Lundt recorded an eight-save shutout for Rising FC, making some vital stops to keep the side ahead before it pulled away for a 3-0 victory against Tacoma Defiance on Saturday night.

D – Sean Totsch, Louisville City FC: Sean Totsch won 5 of 5 tackles, 7 of 10 duels and made seven recoveries while completing 81 of 86 passes and almost found the net in attack, hitting the woodwork with a header in LouCity’s 3-0 win against Memphis 901 FC.

M – Milan Iloski, Real Monarchs SLC: Milan Iloski scored both goals for the Monarchs in their 2-0 win against Sacramento Republic FC, his first in the professional ranks, and had seven shots overall in the contest.

M – Alejandro Guido, San Diego Loyal SC: Alejandro Guido came off the bench with SD Loyal down a goal to the LA Galaxy II with 22 minutes to go and helped turn the game around, scoring a long-range goal before providing a beautiful assist on Miguel Berry’s late winner.

M – Jake Areman, Charlotte Independence: Jake Areman had one assist and two key passes while completing 51 of 59 passes overall, completing 6 of 6 dribbles and winning 9 of 11 duels in the Independence’s 3-2 victory against Hartford Athletic.

F – JJ Williams, Birmingham Legion FC: JJ Williams recorded a late game-winner for his first goal of the season to add to an assist on Neco Brett’s early finish and had four headed clearances defensively in Legion FC’s 2-1 win at OKC Energy FC.