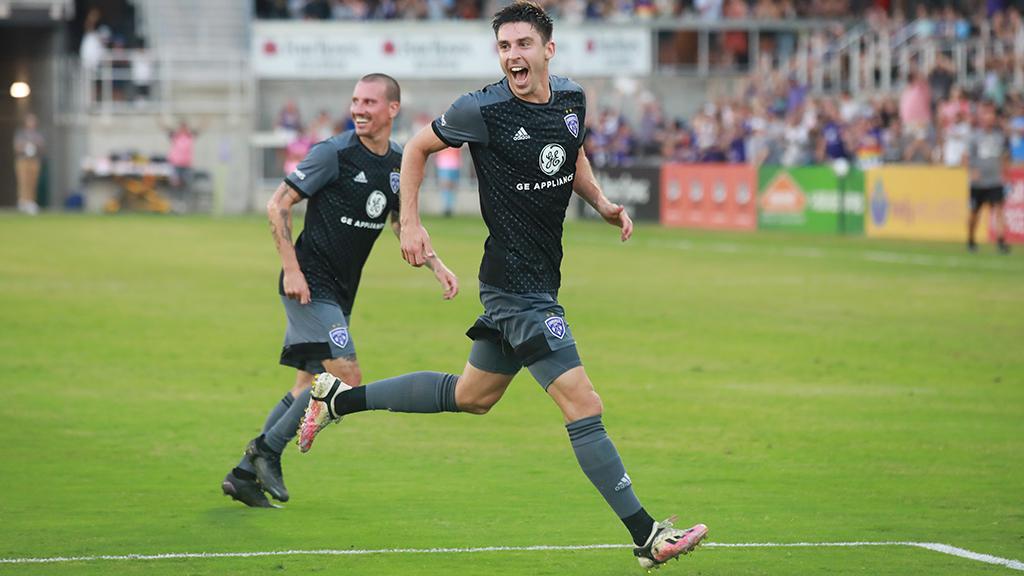 There was plenty of eye-catching action in the USL Championship’s Eastern Conference this past weekend as teams approached the end of the first quarter of the campaign. Here are five key talking points we took away from the games.

After outshooting Memphis 901 FC 9-3 in the first half, including three shots on target and another two by midfielder Paolo DelPiccolo that narrowly missed either corner of the net, the message in the locker room at halftime with the game still scoreless was about belief.

“At halftime I talked to the players about believing it’s coming,” said LouCity interim Head Coach Danny Cruz. “I really did believe it. I said it to them at halftime. I knew, or felt, that once the first one did, we would keep going.”

There certainly could have been some doubt creeping in. By its underlying numbers, Louisville has been one of the most productive teams in chance creation in the Championship this season – it currently ranks second only to Phoenix Rising FC in Expected Goals this season with 14.10xG – but in its defeat to Atlanta United 2 the prior week those chances had failed to turn into goals. But after Wesley Charpie’s instinctive finish to break the deadlock in the 58th minute, turning home a low ball by DelPiccolo into the right corner of the net after DelPiccolo’s initial shot from a free kick crashed into the defensive wall, Cruz’s words seemed prophetic. Twelve minutes later, the hosts had a 3-0 lead that it would hold to send the 12,115 fans on hand for Lynn Family Stadium’s grand opening home after a win.

“Obviously, it was good to score three goals and proud to keep the zero as well,” said Cruz. “It’s important that we’re continuing to improve on both ends of the field, but tonight was certainly a great game. I’m proud of the group.”

Louisville has a big week coming up with a home clash against Central Division leader Birmingham Legion FC followed by a trip to FC Tulsa. Getting back on the scoresheet in impressive fashion will provide an important boost ahead of both those contests.

Having played off-and-on for Birmingham Legion FC on loan over the past two seasons, there was a certain familiarity with the club’s style for JJ Williams as he signed a permanent deal to come back to the state he’d been raised in this season.

There was still some familiarity that needed to be gained with the team that surrounded him, though, after playing sparingly alongside fellow forward Neco Brett in 2020. The chemistry that’s starting to develop has been evident in the side’s past two games, though, with Williams providing an assist on goals by Brett in back-to-back contests and then on Saturday against OKC Energy FC providing a late winner in a 2-1 victory at Taft Stadium that moved Legion FC four points clear at the top of the Central Division.

“I think JJ is maturing in the fact that he’s keeping the ball more for us. He’s always a force in the air, but his ability to get in good spots is getting better because he’s starting to understand the guys he’s playing with,” said Legion FC Head Coach Tom Soehn. “Look, though, I’m not going to sugarcoat it but tonight wasn’t a great performance for us. It was a hard game to play on a really small field and we didn’t have enough of the ball, but you’ve got to find a way to gut those kind of results out. Credit to the guys they found a way to win it today.”

SABELLA COMES THROUGH IN 2021 DEBUT FOR INDEPENDENCE 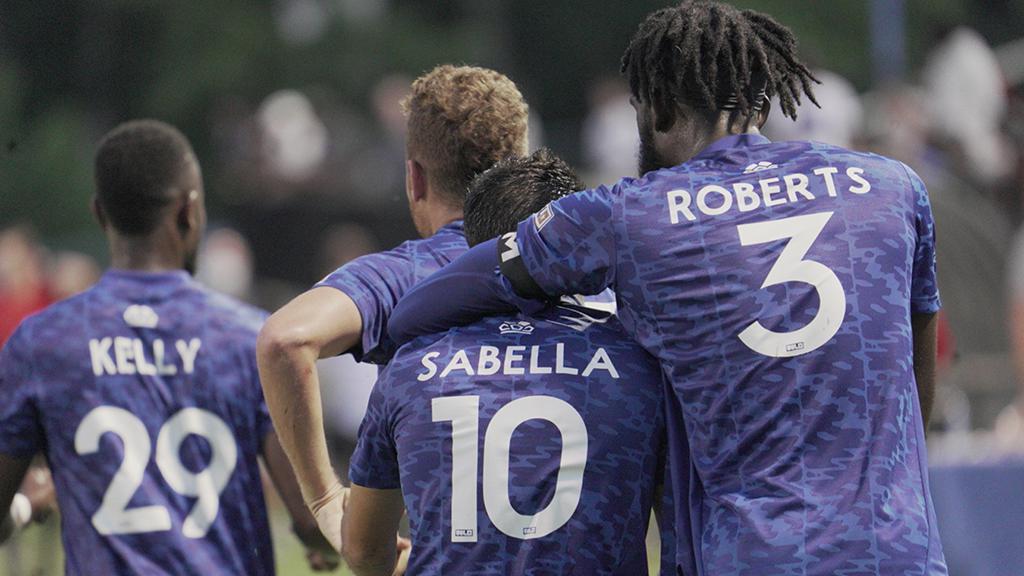 For most young players, there’s a maturation process that is needed that can help a player go from a notable name to a consistent performer. If the Charlotte Independence’s Valentin Sabella’s postgame thoughts after a brilliant finish that capped a 3-2 comeback victory for the hosts against Hartford Athletic on Sunday night at the Sportsplex at Matthews are any guide, the 21-year-old best known for his U.S. Open Cup heroics two years ago for the Florida Soccer Soldiers is finding a new confidence in his ability.

“Going to the goal, I knew as soon as I got played out wide, I was one-on-one,” said Sabella. “In past years I probably would’ve held it up and looked for a pass or something like that, but I was confident I could get it done.”

Sabella’s 25-yard strike to the top-left corner was certainly one of the best goals in the Championship over the past week and came in his return to the club’s lineup after a loan stint with Cancun FC in Mexico’s second tier. The Argentine didn’t see a great deal of playing time during the Clausura this spring, making three appearances and logging 68 minutes, but he certainly seems to have gained from the experience.

“I usually get very anxious throughout the day on gamedays, but today I was calm,” said Sabella. “I was enjoying myself at home, and I think that played a big part in my performance today because I came in with a different confidence.”

Going behind inside the opening five minutes hasn’t typically been in the Tampa Bay Rowdies playbook – Robbie Dambrot’s fourth-minute goal for Loudoun United FC on Friday night at Al Lang Stadium was the earliest in a game the side had conceded a goal since FC Cincinnati’s Emmanuel Ledesma converted a second-minute penalty kick on August 25, 2018 against the side – but playing before a crowd of almost 5,000 fans as Al Lang Stadium reopened fully the Rowdies produced a refocused and reenergized performance after the first-half hydration break to eventually claim their fifth consecutive home win of the season.

Tampa Bay’s slow start was certainly a surprise – “I think when we look back at it we’ll be disappointed in terms of a lack of concentration to do the right things,” said Head Coach Neill Collins after the game – but the hosts had more than enough chances to go ahead before Foster Langsdorf’s first goal after arriving on loan from Minnesota United FC grabbed a late victory.

“When you’ve been ahead in the first five games and you go behind last week and you go behind today, it’s just different,” said Collins. “It gives the game a totally different context. That’s why with statistics you always need context. Tonight, we got the goal before halftime, and I thought we’d come on better in the second half earlier. It took us until really late to start creating the chances that we want. But it’s a good character moment. It means we’ve [completed a comeback], so it gives us belief that we can do that in the future.”

HOUNDS UPBEAT AFTER DRAW WITH MIAMI

Saturday night marked Head Coach Bob Lilley’s 100th game at the helm of Pittsburgh Riverhounds SC in all competitions, and while his side wasn’t able to mark the occasion with a win, the 1-1 draw with Miami FC produced a sense of optimism that the Hounds are on the right track to contend for a fourth consecutive trip to the USL Championship Playoffs.

The hosts got out to an ideal start as Russell Cicerone scored his fourth goal of the season in the early going, and the nature of that finish – laid on by a precise delivery from Alex Dixon for his third assist of the season that Cicerone redirected into the bottom-right corner of the net – is something Lilley is hoping to see more of in the attacking third as the side continues to build chemistry amongst its new attacking corps.

“I think we need to get more active runs, rather than just bashing it in at the near post. If we can be a little more composed in the final third, I think it’ll result in more shots and more goals,” said Lilley. “We also could be better with defending in open space, but I felt like we dealt with Miami’s pace pretty well. I think with a lot of those tactical things, we’ll get there.”

Pittsburgh faces a quick turnaround on Tuesday night with a visit to face Indy Eleven, a side it hasn’t previously defeated on the road in three prior trips, on ESPN Deportes. That could prove a challenge with Indy coming off a game last Wednesday night in El Paso, but the ingredients appear to be there for the Hounds to succeed long-term.

“I think tenacity is a requirement to win games consistently, and that’s something we talked about after the last two home games,” said Lilley. “I told the guys to keep doing what they’re doing. We’ve lost three games this year, but we haven’t lost two in a row. We should be better, but if we’re competing well, those numbers will turn around.”