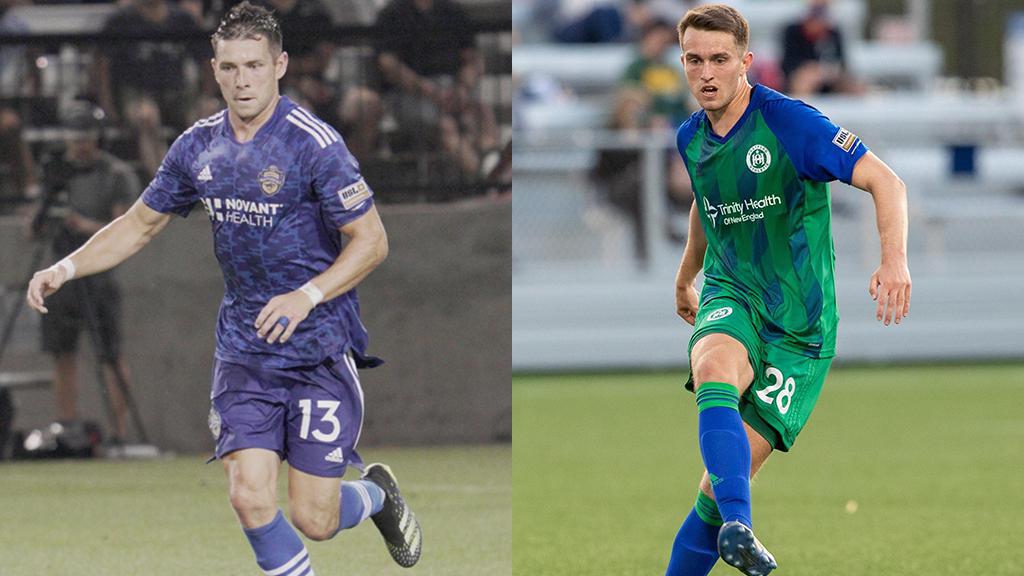 The Charlotte Independence's Brandt Bronico and Hartford Athletic's Conor McGlynn are set to square off on Sunday night at the Sportsplex at Mathews.

MATHEWS, N.C. – The Charlotte Independence and Hartford Athletic will square off for the first time this season on Sunday night at the Sportsplex at Mathews with a one-point gap separating the two sides as they begin the weekend in the top three of the Atlantic Division standings. Kickoff is scheduled for 7 p.m. ET.

Both sides are coming off notable wins, with the @Independence (3-2-0, 9pts) having handed the Tampa Bay Rowdies their first loss of the season in their most recent outing last Saturday night. Junior Etou scored the lone goal in a 1-0 win for the side in its home opener, converting from the penalty spot in the first half, and the Independence might have taken victory by a wider margin if not for a penalty kick save by Rowdies goalkeeper Evan Louro on a second spot kick during the contest taken by Irvin Parra and other chances that came the hosts way. The result did move Charlotte goalkeeper Brandon Miller into sole possession of second place in the league’s all-time regular season shutouts list as the veteran shot-stopper notched the 41st of his career. The hosts will be looking for a similar performance to when the Athletic last visited in the 2019 season when the Independence took a 4-0 victory as Enzo Martinez struck twice.

@HFDAthletic (3-0-1, 10pts) arrives back in Charlotte a different team from its inaugural season, however, and now stands as the last undefeated side in the Championship’s Eastern Conference. The Athletic moved into second place in the division last Saturday night as it posted a club-record 7-0 victory against the New York Red Bulls II at Dillon Stadium as Danny Barrera had one goal and three assists while Juan Carlos Obregon Jr. and Preston Tabort Etaka each notched a pair of goals. Barrera’s trio of assists moved him into the Championship lead with five helpers this season, and he now sits third in the league’s all-time list of regular season assists with 37, only two behind current leader Kenardo Forbes of Pittsburgh Riverhounds SC. After Tampa Bay’s late win on Friday night, both Hartford and Charlotte will be looking to try and keep pace with the division frontrunner as they square off.