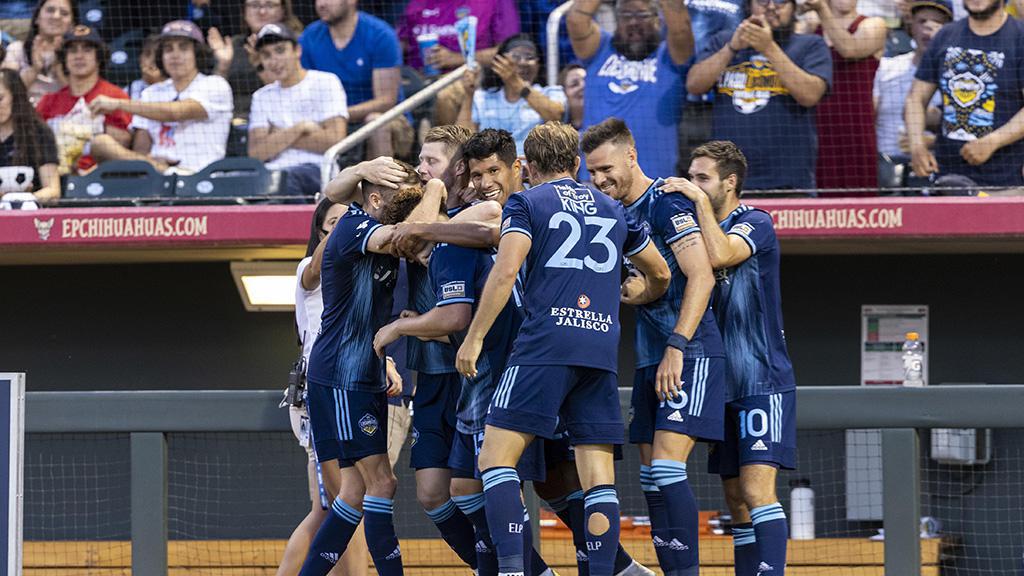 El Paso Locomotive FC has recorded four consecutive shutouts and is undefeated in its past 16 regular-season games dating back to the 2020 season after its midweek win against Indy Eleven. | Photo courtesy Ivan Pierre Aguirre / El Paso Locomotive FC

After this past Wednesday night’s results, there’s plenty to look forward to in the USL Championship’s Western Conference, including some notable streaks being created in El Paso. Here are five storylines to watch for this weekend.

It might be a little too soon to talk about in terms of the Championship’s Record Book, but the two streaks El Paso Locomotive FC is in the middle of after Wednesday night’s 2-0 victory against Indy Eleven are certainly worth highlighting. First, there’s the four-game shutout streak that saw Logan Ketterer pick up where he left off for the side after being spelled by Minnesota United FC loanee Adrian Zendejas while he was on loan himself with the Portland Timbers. That’s already halfway to the Championship’s all-time record for the longest run of consecutive games with a shutout of eight contests, set by Rio Grande Valley FC in the 2016 season, when goalkeeper Callum Irving was in the middle of one of the most remarkable runs in league history.

Then, there’s the 16-game undefeated streak the club currently sports in the Championship’s regular season going back to its loss on August 1, 2020 against Phoenix Rising FC. After ending that campaign undefeated in 11 games to finish top of Group C on its way to the Western Conference Final for a second consecutive season, Locomotive FC has picked up right where it left off this season to move within seven games of the 23-game streak that FC Cincinnati put together during the 2018 USL Championship season. Is it going to ask a lot of El Paso to reach – or break – both of those marks? Absolutely. But this side is consistently showing it is capable of being one of the most difficult teams to both break down defensively and defeat in the Championship this season, as illustrated in its win against Indy.

“I cannot fault the guys at all in any department,” said Locomotive FC Head Coach Mark Lowry after that contest. “The only thing I think the game deserved was more goals from us. 2-0 maybe flatters [Indy Eleven] a little bit. If we want to be the best – which we want to be, we strive for it every single day – when you dominated like that you need it’s to show 4 or 5-0 at the end of the game. That’s the only frustration I have, and it is because we want to be great. We are five unbeaten this season but we’re never content and that’s the attitude we have to have every single day.”

MOAR MEETS THE MOMENT FOR PHOENIX

If the landmarks for El Paso are still a little way off in the distance, Phoenix Rising FC’s Santi Moar has reached his moment on Saturday night when his side hosts Tacoma Defiance at Wild Horse Pass (10:30 p.m. ET | ESPN+) with a chance to equal the record for most consecutive regular-season games with a goal. Set by then Sporting Kansas City II forward Hadji Barry – now with the Switchbacks – during the 2018 season, the eight-game run has been challenged in each of the past two seasons, but not matched.

In 2019 it was Moar’s current teammate Solomon Asante that made his run at the record, scoring in seven consecutive games between May 18 and June 29 before being held off the scoresheet in a 1-0 victory on the road against Rio Grande Valley FC while recording three shots, two of which were on target. Then last year it was the turn of Foster Langsdorf at Reno 1868 FC, who went seven games between August 15 and September 20 with a goal in every contest before recording only one shot in a 1-1 draw against Sacramento Republic FC.

Moar is unlikely to not go down shooting. He not only leads the Championship with six goals this season but is tied for second with 17 shots, an average of almost three per game. Last Saturday night as Phoenix tried to rally against San Diego Loyal SC, he reeled off seven attempts on goal, the sixth of which provided the first goal in its 2-2 comeback draw. Going up against the Defiance, Moar will have the goal – and a record-tying moment – in his sights.

AUSTIN IN NEED OF ATTACKING BOOST 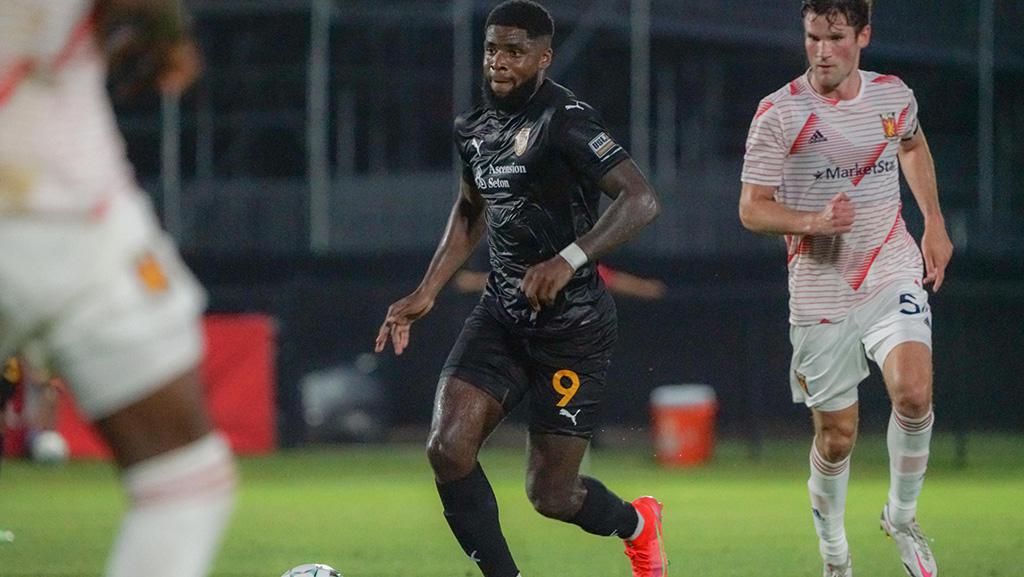 Austin Bold FC's Sean Okoli has found the net once from the penalty spot this season, part of an underperfoming Bold FC attack through its first four games of the season. | Photo courtesy Austin Bold FC

There’s no question of the pedigree that Austin Bold FC’s new attacking arrivals bring with them – players like Sean Okoli, Jason Johnson and Stefano Pinho have produced consistently in the lower divisions during their careers – but as the side heads to face New Mexico United on Saturday night (9:30 p.m. ET) that production is going to be needed if Bold FC is going to find a second consecutive victory and push its way into the Mountain Division top four.

Of the three, Okoli is the only one to have found the net so far, and that came from the penalty spot in the side’s 2-0 victory against Real Monarchs SLC. The lack of attacking production has been reflected in the club’s underlying analytics, where Austin currently ranks as having the lowest Expected Goals mark in the Championship at just 3.22xG through four games. That’s lower that Oakland Roots SC, even though Oakland has played only three games this season.

Bold FC is looking to rebound into a playoff berth this season after missing out last year. It appears to have plenty of the pieces to do so with its defense having conceded only once since its last visit to New Mexico on May 15 for its season opener. If Austin is going to get where it wants to go, though, it’s going to need to start getting more from its front line soon.

If Orange County SC Head Coach Braeden Cloutier has his way, expect a much better start from his side as it takes on Oakland Roots SC on Saturday night than the one you saw this past Wednesday in the club’s 1-1 draw against San Diego Loyal SC.

“I thought the first 15 minutes we didn't come out to play again,” said Cloutier on Wednesday night. “I mean, we wanted to send a message like we did in Sacramento last weekend, from the first minute, get on top of the other team and I don't think the energy and intensity was quite there for the first 15 minutes until they scored a goal. And once they scored a goal, I think it woke us up, [but] you can't dig yourself a hole to try to dig yourself out.”

Saturday’s Pacific Division matchup is an important one for both clubs, but maybe more so for Orange County as it looks to push through the middle ground that has developed in he division after inconsistent starts to the season by most teams. Should Orange County earn all three points, it would not only stretch its undefeated streak to three games, but start to bridge the gap to Phoenix Rising FC and the LA Galaxy II. Oakland may need to be on its toes early.

IS MAIKEL CHANG BACK IN THE ASSISTS RACE WITH THE MONARCHS?

While Milan Iloski’s pair of goals stole the headlines in Real Monarchs SLC’s first win of the season on Wednesday night – a 2-0 victory against Sacramento Republic FC – it was an older and more familiar name that provided the assist on his second goal that could draw the spotlight moving forward. Cuban playmaker Maikel Chang – who joined Real Salt Lake on an MLS contract after leading the Monarchs to victory in the 2019 Championship Final – was back at Zions Bank Stadium and back in the middle of what’s shaping up to be an intriguing storyline to follow this season.

With his assist, Chang moved back into sole possession of second place in the Championship’s all-time regular-season assists leaders with his 38th of his career. All four of the players at the top of that list have now seen action this season, with Pittsburgh Riverhounds SC’s Kenardo Forbes (39) leading the way and Hartford Athletic’s Danny Barrera (37) and Phoenix Rising FC’s Solomon Asante (36) right behind.

Real heads to face Rio Grande Valley FC on Saturday night (8 p.m. ET | ESPN+) at H-E-B Park and with RSL still waiting to return to action after the international break it could be that Chang will be part of the Monarchs again. If Chang gets an extended run with the side this summer, there could be a whole lot of back and forth in the record book to come.