Brett nears landmark as Legion FC heads to OKC; Hartford gets test of credentials against Independence 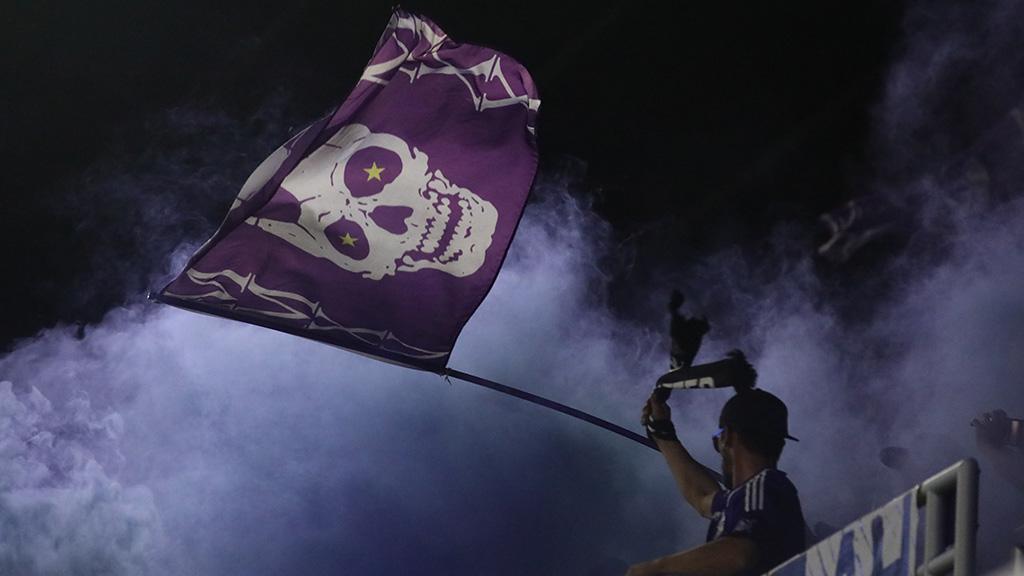 There’s a collection of intriguing action across the USL Championship’s Eastern Conference this weekend, starting on Friday night as the Tampa Bay Rowdies return to action at Al Lang Stadium looking to rebound from their first loss of the season. Here are five more things to watch for on Saturday and Sunday night.

With the side currently on a two-game losing streak, the boost a capacity crowd – which could top out above 15,000 fans including the safe-standing supporter sections – could bring would be an ideal backdrop to the game for interim Head Coach Danny Cruz.

“The players are very much looking forward to it and have been for a very long time,” Cruz told media on Thursday. “The one thing I’m excited for is the guys who have been here from the very beginning. I think this is a special moment for the group, for the club, and we’re very excited to pack that place.”

Louisville could certainly count itself unfortunate to come in off back-to-back defeats, with its attack producing numerous chances that either went astray or were denied by an in-form Atlanta United 2 goalkeeper Alec Kann last Sunday night in a 1-0 loss. The potential return of forward Cameron Lancaster and defender Jonathan Gomez – who spent recent weeks training with Mexico’s Men’s National Team – should also provide a potential boost to the lineup as it looks to make a grand entrance in one of the biggest nights in club history.

Birmingham Legion FC forward Neco Brett’s ascent up the USL Championship’s scoring charts has been noticeable over the past three seasons, and on Saturday night the Jamaican international can become the 12th player in the league’s history to bag 50 goals in the regular season as Legion FC heads to face OKC Energy FC at Taft Stadium (8:30 p.m. ET | ESPN+)

Brett earned Championship All-League selection in the 2019 season with Pittsburgh Riverhounds SC, and since joining Birmingham has maintained a solid pace in front of goal with 14 goals in 23 appearances for the side. Among the current and prospective 13 players to reach the Championship’s 50 Goal club – Tampa Bay Rowdies forward Steevan Dos Santos is also on 49 goals – Brett currently ranks sixth in Minutes per Goal for his career, ahead of players such as second-placed Jorge Herrera and third-placed Corey Hertzog.

The 29-year-old is currently tied for second in the Championship with five goals this season on just 12  shots, which should offer a message to Energy FC that they’re not going to want to let their defensive eye wander from Brett as he comes to town.

HARTFORD LOOKS TO BACK UP HISTORIC WIN 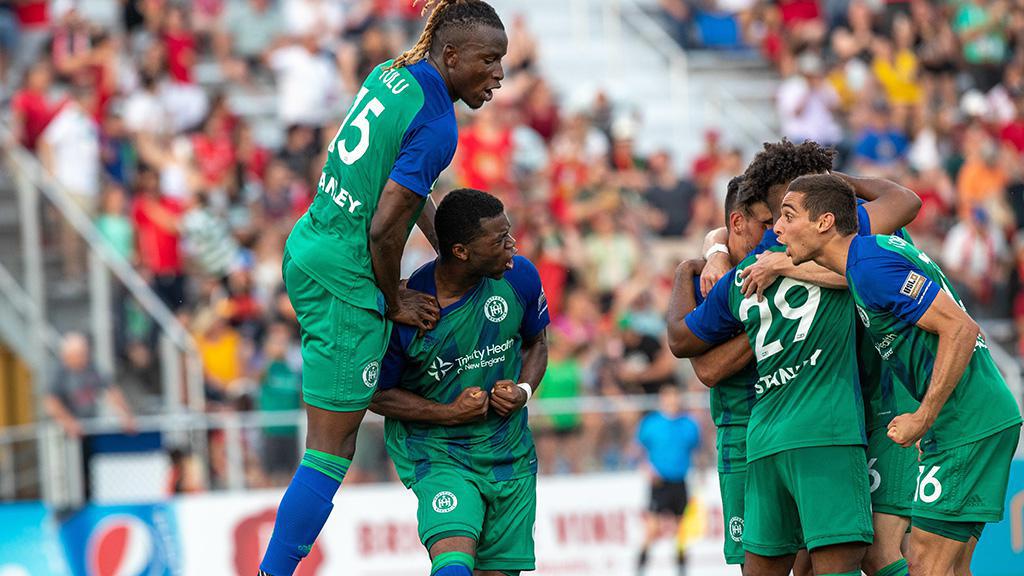 Hartford Athletic is the last remaining undefeated team in the USL Championship's Eastern Conference ahead of its trip to face the Charlotte Independence on Sunday night. | Photo courtesy Hartford Athletic

With all of the changes that happened at Hartford Athletic this offseason, including the arrival of Head Coach Harry Watling for his first senior team appointment, you probably wouldn’t have picked them as the team that would be the last undefeated side in the Eastern Conference. Four games into the season, though, and here they are after a club-record 7-0 victory last Saturday night against the New York Red Bulls II that moved the side into second place in the Championship’s Atlantic Division.

The Athletic now get a visit to face the Charlotte Independence on Sunday night at the Sportsplex at Mathews for what looks on paper to be another good test of their credentials as playoff contenders. The Independence are coming off a narrow but notable 1-0 victory against the division-leading Tampa Bay Rowdies last Saturday night in a game that Charlotte arguably should have won by a wider margin – it held a 2.67-0.36 edge in Expected Goals against the Rowdies.

The combination of the talent that the Independence have in attack – especially with the growing match fitness of Dane Kelly after his recent return to the club – and the defensive solidity that has seen goalkeeper Brandon Miller record three shutouts in six games to move into second place all-time in the league’s shutouts list should give Hartford’s attack led by playmaker Danny Barrera a strong test that could give us an idea of how strong Hartford’s challenge might be.

It seems strange to say for a side like the Charleston Battery that has been one of the better home teams in the Championship over its history, but somehow the side has never quite figured out the New York Red Bulls II on its home turf. That proved the case again earlier this season when even after the Battery held a two-goal halftime lead at Patriots Point, the Red Bulls II battled back to earn a 2-2 draw and maintain their undefeated record all-time in Charleston, which now stands at 3-0-5 across the regular season and playoffs.

That lost lead was part of a slow start overall for the Battery this season that put it at the bottom of the Atlantic Division to start this week, but Tuesday night brought the club’s first win – a narrow 1-0 victory against Loudoun United FC that saw the visitors score with their first shot on goal in the 74th minute through Burke Fahling. Despite the difficulty of the result, Battery Head Coach Mike Anhaeuser is hopeful it could give his side the boost it needs to go on a run and close the gap to the teams currently in the playoff positions.

“It is a great feeling when you get that first win, you know,” said Anhaeuser on Tuesday night. “It’s the hardest one sometimes to get and obviously with the long start, the delays, the cancellations and all the things going on, this puts us right back in to get moving forward.

“We did what we had to do in the middle of the field. It probably wasn’t our best performance offensively, but when you win one zero on the road, you got to take that and really say great job to the whole team.”

There have been parallels in Pittsburgh Riverhounds SC’s two home games this season. In both, the side has given up a first-half lead and has had to try and battle back, only to come up short. After last Sunday’s 1-0 defeat to Austin Bold FC, what Hounds Head Coach Bob Lilley is looking for in response it a greater sense of urgency from his side, not only to start games, but also should it go behind as Miami FC visits on Saturday night (7 p.m. ET | ESPN+).

“We can’t wait around for something to happen,” said Lilley to local media this week. “We have to put the onus on the team to take more risks.  I’ve seen soccer for many, many years. There’s not a hidden secret when trying to figure out how to solve a tough opponent.  We have to do all the little things right.  It may come into play this weekend. There’s always another challenge. The question is, can you create enough opportunities?”

If there’s a potential inspiration point Lilley has looked at this week, it was from another slightly more high-profile game played last Sunday night. The U.S. Men’s National Team’s 3-2 victory against Mexico in the Final of the Concacaf Nations League in Denver saw the side battle back from a goal down in either half while offering a sense of urgency in its play that Lilley is hoping his players can replicate as they enter a key week of the season. After Miami, the Hounds visit Indy Eleven in midweek before heading to face the Tampa Bay Rowdies next weekend.

“Looking at the U.S., that perspective was quite good,” said Lilley. “When you give up a goal, especially early in the match, the sense of urgency should start at that moment. Can’t wait until the end of the match. We have to get higher. Take chances.”