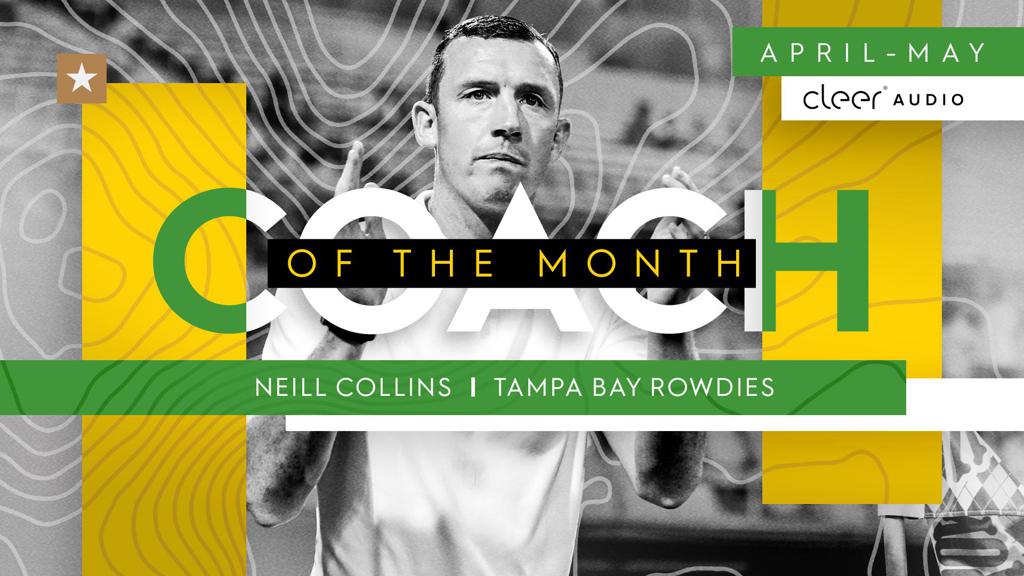 TAMPA, Fla. – The Tampa Bay Rowdies’ Neill Collins has been voted the USL Championship’s Coach of the Month for April and May, earning the award after leading his side to a perfect start to the season with four wins out of four, including three against sides that reached the 2020 USL Championship Playoffs.

Now in his fourth season at the helm of the Rowdies, Collins guided his side to consecutive 3-0 victories against the Charlotte Independence and Pittsburgh Riverhounds SC before the defending Eastern Conference Title holders claimed a 2-1 victory against defending Western Conference Title holders Phoenix Rising FC on national television at Al Lang Stadium. The side rounded the month out with a 2-1 win against in-state rival Miami FC to sit atop the Atlantic Division standings at the end of May.

For Collins, the second Coach of the Month award of his career was not an individual honor but one that had been earned by the club’s players and staff in addition to the input he had made to the club’s success.

“It’s a team award,” said Collins. “I think it just comes back to everything we’re about, that I accept the award on behalf of everyone at the club that worked really hard through preseason. We know we’ve had a good start to the season, but it’s nothing more than that. It’s just a little bit of recognition that we’ve had a nice start. We know we’ve got a lot to build on.”

The Rowdies made their best start to a season in the club’s modern era with five consecutive victories moving into June, and have conceded only three goals in six games overall to continue the club’s stellar defensive displays from a season ago. That has been aided by the returning group of 15 players that helped the side claim its first silverware in the Championship a season ago, but also by a solid incoming group of players that Collins has also been very pleased with.

“Bringing 15 guys back, it’s the first time I’m really seeing the continuity and what that brings in terms of the know-how of what we want,” said Collins. “Obviously, the new guys as well have really settled in well. I think they’ve really impacted our squad in a positive way. Conner Antley, Steevan [Dos Santos], Laurence Wyke, all the signings -- whether they’ve hit the field or not have impacted our locker room. I think that’s why we got off to a good start.”