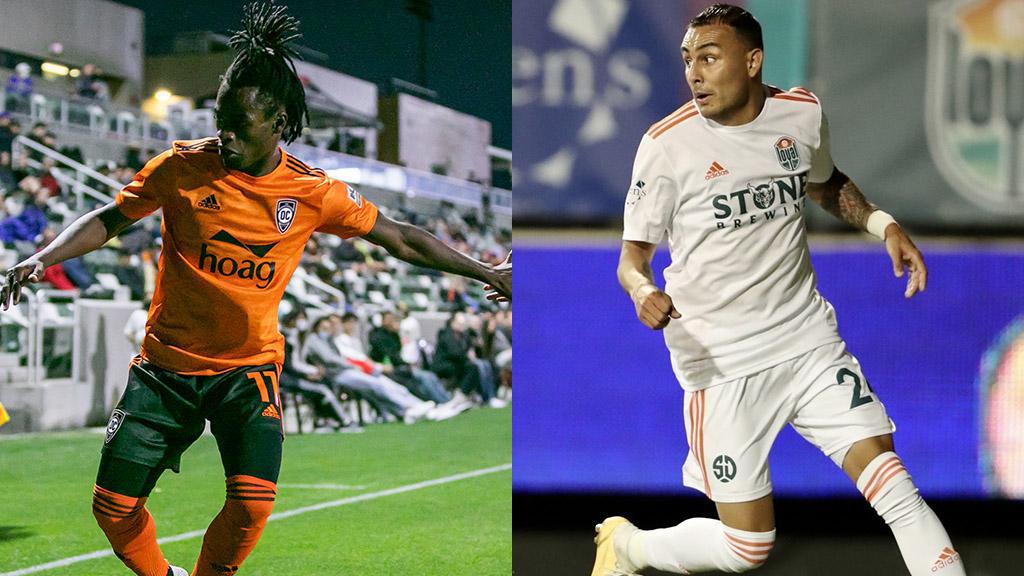 Orange County SC's Ronaldo Damus and San Diego Loyal SC's Miguel Ibarra will both look to play key roles as their sides square off for the first time this season on Wednesday night at Championship Soccer Stadium.

IRVINE, Calif. – Orange County SC plays host to San Diego Loyal SC at Championship Soccer Stadium on Wednesday night with the hosts looking for a second consecutive victory and SD Loyal hoping to bounce-back from a late draw in its most recent outing. Kickoff is scheduled for 10 p.m. ET.

@OrangeCountySC (2-2-0, 6pts) picked up its second win of the season this past Saturday night as it defeated Sacramento Republic FC 3-1 behind goals from Ronaldo Damus, Eero Markkanen and Brian Iloski at Heart Health Stadium. Both of Orange County’s wins have come against Sacramento in the early going as the side has alternated losses and victories in its first four games, but now the side has a chance to record its first back-to-back victories since a four-game winning streak early in the 2020 season that included a victory on the road against San Diego. Damus’ goal for OCSC in Sacramento was the first for the 2019 USL League One Golden Boot winner in the Championship as the 21-year-old Haitian forward has started all four games so far for his new club after making the step up from North Texas SC this offseason.

@SanDiegoLoyal (1-4-1, 4pts) has taken four points from its past two contests, but will have left its last outing against Phoenix Rising FC disappointed to have only come away with a 2-2 draw after letting a two-goal lead slip in second-half stoppage time at Wild Horse Pass on Saturday night. SD Loyal got goals from Miguel Berry – his first since arriving back on loan from Columbus Crew SC – and a second of the season from Jack Blake in Phoenix, and the side’s overall performance had positives it will look to carry over into its midweek contest. SD Loyal’s improvement has been aided by the arrival of Berry, and also the signing of midfielder Miguel Ibarra, who has recorded four key passes and completed 47 of 57 passes overall in his first two appearances for the club. San Diego will be hoping for a repeat of the most recent meeting between the sides last September when Alejandro Guido scored twice in a 2-0 victory as it looks to make a move up the Pacific Division standings.