WESTERN TALKING POINTS: Calistri’s Equalizer Had Echoes from Past 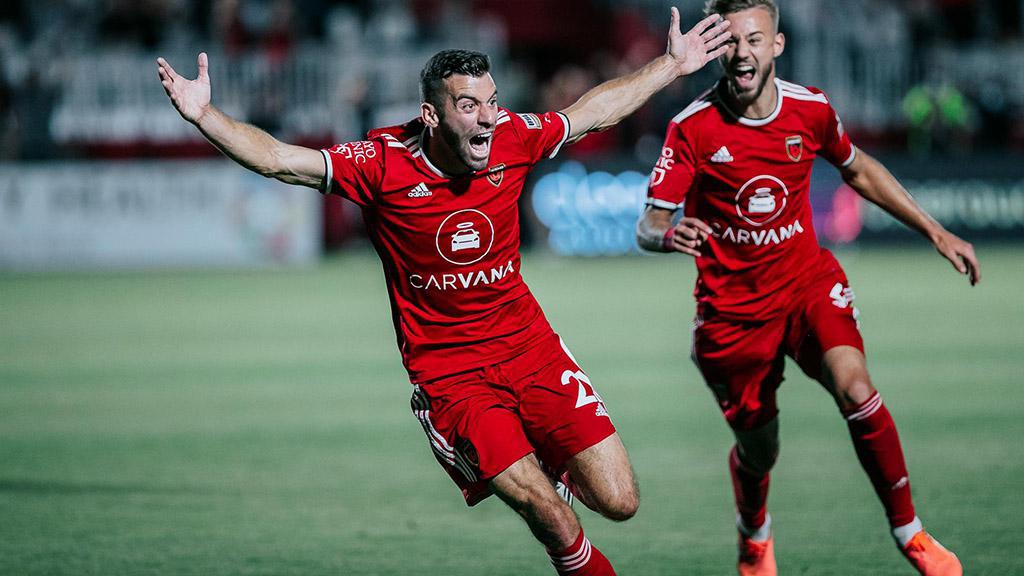 The weekend’s action featuring Western Conference clubs included a pair of Mountain Division victories on the road in the Eastern Conference, a standout home opener display in Las Vegas, and a familiar ending for fans of Phoenix Rising FC. Here are five takeaways from the past three nights.

CALISTRI’S BLAST FROM THE PAST LIFTS PHOENIX

It had been 616 days since Joey Calistri had found the net for Phoenix Rising FC, but when his first goal of the 2021 USL Championship season arrived against San Diego Loyal SC on Saturday night it was hard not to think of the one that had come late in the 2019 regular season. In front of a club-record crowd of 8,058 fans at Wild Horse Pass – just as before on the road against New Mexico United on Sept. 28, 2019 – Calistri’s sweetly-struck finish through a crowd of players into the bottom corner of the net earned Rising FC a 2-2 draw deep in stoppage time after a furious finish by the hosts to salvage a point.

“This was in front of the home crowd, so this one was special. They're both special,” said Calistri after the game. “Anytime you can get a last-minute goal to save a point, it's special."

“Right when he hit it, I said ‘that’s in,’” added Rising FC Head Coach Rick Schantz “If there's any player that you want to a hit a volley on our team, it's Joey Calistri. Calistri and Joe Farrell are the heart and soul of this locker room. They will do anything for the team. Calistri stepped up and got it done. I'm very proud of him as well. I told the guys in the huddle, every player will be needed at some point and every player will have a big moment for us, and tonight it was Joey Calistri.”

It certainly wasn’t Calistri alone. Looking to make up a two-goal deficit after San Diego struck in either half through Miguel Berry and Jack Blake, the hosts introduced Arturo Rodriguez, who not only set up Calistri’s goal to level the game but helped produce wave after wave of attack that saw the 2019 USL League One MVP record seven key passes in 18-plus minutes of action. The message once again from Rising FC is this is a side that won’t let up until the final whistle, and it was sent loud and clear.

“They refuse to lose here,” said Schantz. “They're not willing to give up. They will never stop. I told them if there's any characteristic about me, it's that I am a hard worker. I will never quit. I'll never give up on anything. I'm so proud of them for that.”

It’s a terrible cliché, but there might be no other way to describe Rio Grande Valley FC’s 4-2 victory against Miami FC on Sunday evening as the proverbial “Game of Two Halves”. Up until the moments before the halftime break, Miami looked in control on home turf at FIU Stadium having staked out a two-goal lead, including a world-class Olimpico by Pierre Da Silva.

And then somehow, the Toros simply proved too incisive, and too good, for Miami to contain. You could argue the momentum shift happened in first-half stoppage time when James Murphy’s corner kick that found Elvis Amoh for a header was sharply turned onto the crossbar by Miami goalkeeper Connor Sparrow. After the same duo linked up to score from a similar situation early in the second half – followed by a red card to Miami’s Bolu Akinyode – the game quickly tilted in the favor of the visitors. Another pair of goals by Amoh later as well as an own goal by the hosts, and things had firmly swung the Toros’ way.

The momentum RGVFC carried throughout the second half – part of it self-inflicted by Miami, certainly – was an impressive display of what the Toros can be capable of. The visitors went on a run of 10 consecutive shots between the 39th and 70th minute that tilted the game in their favor, and should be another alert as to this team’s playoff prospects down the line. 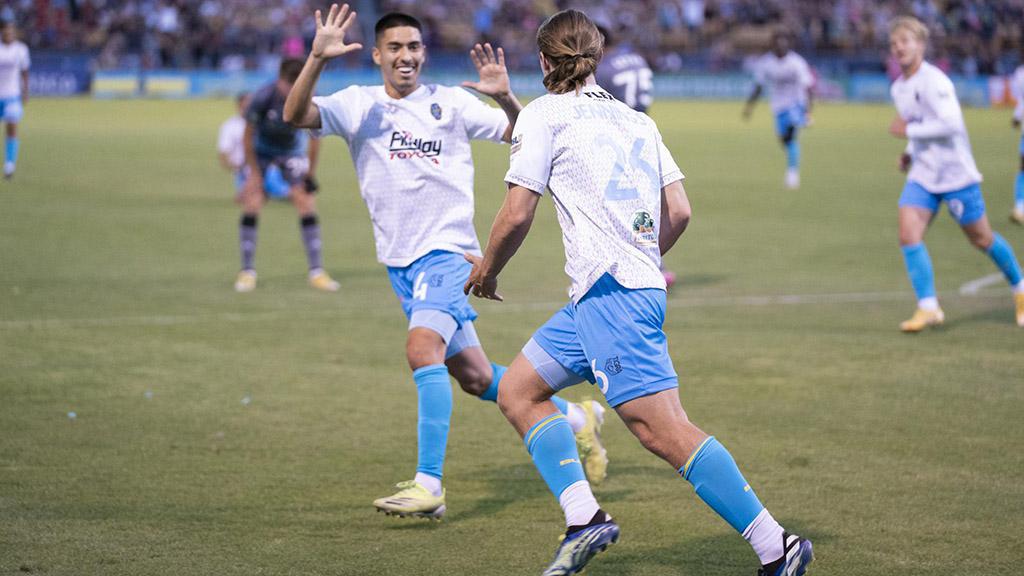 The crowd at Cashman Field showed up in force, with 7,268 fans on hand for Las Vegas Lights FC’s home opener on Saturday night, and the side didn’t disappoint in a 2-0 victory against the previously undefeated Tacoma Defiance that saw the hosts put in a dominant display that showed it might be turning a corner when it comes to its prospects for this season.

If anything, Las Vegas’ victory could have come by a wider margin. Cal Jennings notched the first goal of the night after missing a pair of good prior chances, and the side not only outshot the Defiance 18-4 overall, but posted more shots on goal (5) than the visitors had shots overall. Sharpening up that final product will be the focus for this week, but with the way Lights FC competed all over the field it showed the best form of defense can be a boisterous attack.

“We put enough in the back of the net tonight and that’s what counts,” Jennings told the Las Vegas Review Journal after the game. “Obviously the supports came out tonight and we’re extremely thankful to the fans.”

By American Soccer Analysis’ metrics, Jennings has been one of the most productive players in the Championship this season. His Expected Goals+Expected Assists mark of 4.60 – compared to a combined three goals and assists so far – are the most by any player in the Championship this season. If he gets onto the sort of hot streak that helped Memphis surge late last season, Lights FC should be a solid proposition moving forward.

In a game sometimes decided by narrow margins, sometimes it certainly helps to have a break or two go your way. That proved to be the case for New Mexico United on Friday night, which dominated most of the possession and scoring chances against Real Monarchs SLC but had come up empty until an 82nd-minute free kick by Isidro Martinez sailed into the net after floating over a crowd of waiting players in the penalty area. It certainly might not have been the original intent, but it certainly paid off handsomely as the visitors took their second road win of the season.

“[Martinez] was putting in phenomenal service all night from corners from free kicks, and we were close, man, we were so close to getting a touch on it,” said United Head Coach Troy Lesesne. “And then we get a stroke of luck, which we haven't had any luck I don't think in the first six games of the season, so we will take it with no complaints and three points on the road and keep moving forward.”

New Mexico has produced some stellar goals so far this season to move into second place in the Mountain Division at the end of the week, but it never hurts to have Lady Luck on your side sometimes.

Colorado Springs Switchbacks FC couldn’t close out its first win at new home Weidner Field on Saturday night as San Antonio FC took a 1-1 draw thanks to a late goal by Justin Dhillon, but there was still a lot for the side to feel positive about in a game that reflected the progress the new squad has made since the teams first met just over a month ago. From Hadji Barry’s early finish to Deshane Beckford being introduced into the lineup and performing positive for the opening half, the Switchbacks appear to be coming together in a positive manner.

“I thought we were fantastic tonight for the better part of the game,” said Colorado Springs Head Coach Brendan Burke. “That was really encouraging. If we play like that eventually were going to take our chances; there could have been four or five goals in that for us tonight against one of the best teams in the league, so I'm extremely proud of how our guys played.”

The biggest talking point to come out of the contest, though, might have been the display of San Antonio defender Joaquin Varela, who suffered a dislocated shoulder during the contest but still came through to make a crucial block on an open-net chance the Switchbacks created for Zach Zandi that would likely have put the game away. Varela was withdrawn with five minutes to go, but drew major praise from SAFC Head Coach Alen Marcina.

“We talk a lot about grit and having a warrior mentality,” said Marcina. “For someone who dislocates their shoulder and puts themselves back in to help the club earn a point on the road shows a lot about his character.”