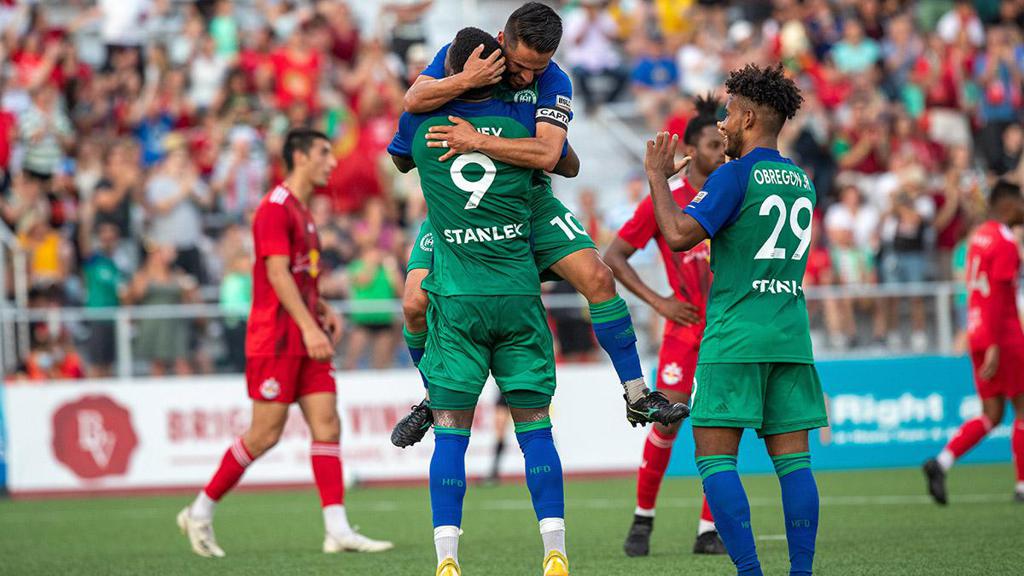 After a weekend dotted with surprising results, the picture in the Championship’s Eastern Conference has taken another twist in the standings. Here are five talking points we took away from the action.

Wherever Danny Barrera has played in the Championship, the creativity he brings to the attacking third both in open play and as one of the league’s best dead-ball specialists has been on display, but on Saturday he achieved something new in recording the first three-assist performance of his career. Barrera became the 18th player to accomplish the feat in the Championship’s history as Hartford ran out to a club-record 7-0 victory against the New York Red Bulls II before a packed Dillon Stadium on Saturday night, where everything seemed to fall the host’s way, including Connor McGlynn’s spectacular goal from five yards inside his own half in the second half.

Barrera added a beautiful finish to his trio of helpers early in the second half, curling a left-footed shot into the left corner of the net from the right side of the penalty area, a finish that drew plaudits from Head Coach Harry Watling.

“He was fantastic. The goal where he drops the shoulder and bangs it off the post is just elite level, so I’m absolutely happy with the skipper,” said Watling. “Danny’s really clever. He knows how to use his body, knows how to manipulate your position, knows how to create space.”

Barrera’s performance was bookended by a pair of two-goal outings by both Juan Carlos Obregon Jr. and Preston Tabort Etaka, with the playmaker providing an assist to each. In the bigger picture, Barrera’s big night has also set up an intriguing storyline to follow throughout this season, as he now sits with 37 regular-season assists for his career, only two behind Pittsburgh Riverhounds SC’s Kenardo Forbes and one ahead of Phoenix Rising FC’s Solomon Asante. It could be we see that lead change hands this year, maybe multiple times.

If the Charlotte Independence’s performance in Week 6 against Miami FC showed what can happen when a side isn’t sufficiently energized, this past Saturday’s performance in the club’s home opener that saw Head Coach Mike Jeffries’ side hand the Tampa Bay Rowdies their first loss of the season illustrated what the Independence can be when they’re at their best. The 1-0 score line might indicate a tightly-fought game, but the reality was Charlotte looked far the better side than the Atlantic Division leaders, reversing the roles the sides played in their opening game of the season on May 1.

There certainly could have been an element of the Rowdies running out of a little steam after a two-game week that had see Tampa Bay eke out a 1-0 win on the road against the New York Red Bulls II on Wednesday night, but Charlotte certainly could have won by a wider margin if not for a stellar performance by Rowdies goalkeeper Evan Louro, who saved one of two penalty kicks awarded to the hosts, and a collection of near-misses that saw Charlotte finish the game with an 2.67xG-0.36xG advantage in Expected Goals. Once Charlotte gets Dane Kelly to full fitness to pair with Irvin Parra in attack, the Independence should become a very dangerous side.

“I thought we dominated,” said Independence defender Christian Dean after the game. “We knew we deserved to win, and I think we took it to ‘em starting around the 15th minute. We came out a little nervous with it being the first home game, but we all looked at each other after 15 and said, ‘we got this’, and definitely won that game pretty easily.” 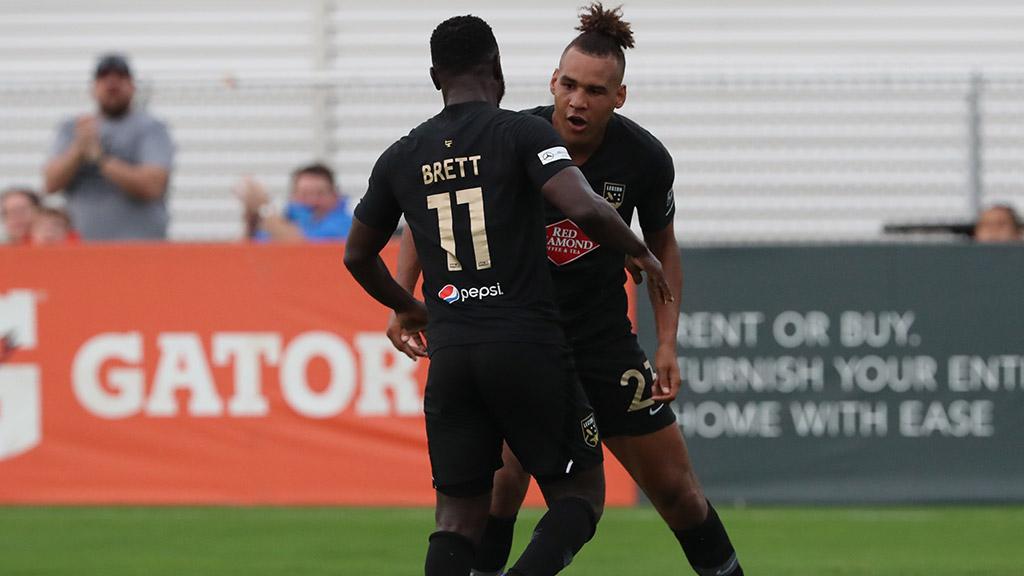 It took until the seventh game of the season, but Birmingham Legion FC put together its first multi-goal game of the season on Sunday night in a 2-1 victory against FC Tulsa that moved the side into first place in the Central Division. In doing so it continued to show how the side is clicking into gear in attack as Neco Brett bagged his fourth and fifth goals of the season thanks to positive work by teammates JJ Williams and Junior Flemmings.

“It feels good,” said Williams after the game. “I think we are starting to grow a lot as a team. You know, when you bring in so many weapons, you’re always wondering about how that’s going to jell, and I feel like we’ve jelled well, I just think that final product is starting to come together a little better.”

While Brett has notched five of the club’s seven goals this season, moving to 49 regular season goals for his career in the process, the player that might have benefited most from Legion FC’s decision to move into a 3-5-2 formation is Bruno Lapa, who now leads the team with 17 shots this season after seemingly being given more freedom to roam while being protected defensively by Anderson Asiedu and in Sunday’s game by Zach Herivaux. Getting the Brazilian playmaker into more spaces to shoot and create – Lapa also leads the team with 15 Key Passes – could hold the key to Legion FC’s continued ascent.

The early returns may not have shown it, but there certainly seems to be something positive building at Memphis 901 FC, which took its first win of the season on Saturday night in a 2-1 victory against Indy Eleven at Michael A. Carroll Stadium. As John over at USL Tactics points out in this thread on Twitter, Memphis set up astutely to cut off Indy’s passing lanes and used one of those turnovers to create its second goal of the game, sharply put away by Kyle Murphy after Michael Salazar had stolen possession and driven forward for an initial shot.

Indy will likely point to what certainly appeared to be a missed call by the assistant referee that could have leveled the game midway through the first half as a long-range shot by Manuel Arteaga hit the crossbar and looked to bounce over the goal line before rebounding out. That may have been the case, but on the overall run of the game Memphis looked the more incisive side going forward overall and registered a 2.12xG-1.00xG advantage in Expected Goals for the game, which almost mirrored the final score. There’s likely more to come from Head Coach Ben Pirmann’s side, and it will be interesting to see how they match up with Louisville City FC next Saturday.

“Before the game we talked about playing with courage and that was exactly what we did,” said Pirmann. “We played fearlessly; we were outnumbered, out manned, all those things. We were playing kids that we signed this week after a high school season. We had guys that were only 50, 60 minutes fit that played 90 minutes, and they went above and beyond. That's a team effort and that's what the city of Memphis is all about. That's what this club's all about and that was rewarding for those players because they've been through a lot these last few weeks. That's what that was all about.”

There are certainly times where a team will feel like it’s running hot in front of goals, and others where it is decidedly not. The latter currently seems to apply to Louisville City FC, which on a weekend of notable results suffered its first defeat in club history to Atlanta United 2, being edged out 1-0 on Sunday night at Fifth Third Bank Stadium. The loss was Louisville’s second in a row, and came despite the visitors handily outshooting and outcreating its hosts only to be denied by a standout performance by Atlanta goalkeeper Alec Kann and his defense.

“I certainly feel we’re creating enough chances to win games, and I’ve felt that here two games in a row,” said LouCity Head Coach Danny Cruz. “But the score line is what matters. Chances are great, but if you’re not finishing them, then ultimately you put yourself in a position to lose the game.

“We need to be better in individual execution and collective execution, and that starts with me making sure we’re consistently working on it and progressing daily.”

LouCity has posted a combined Expected Goals mark of 4.76 over its past two games but has only come away with two goals to show for it. The theory is that fortune should turn around – overall this season Louisville ranks second only to Phoenix Rising FC in Expected goals with a cumulative 11.20xG – but Cruz and his side will be looking to make that happen sooner rather than later to remain in touch with the leaders in the Central Division, of which Atlanta is now one.