Toros ready for challenging trip to Miami; Musovski eager to play before hometown crowd in Vegas 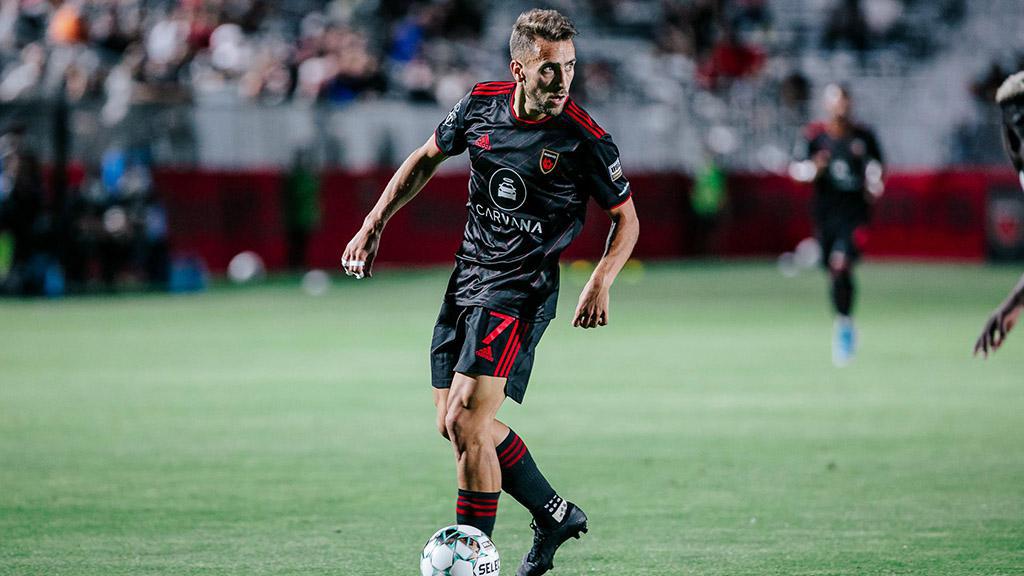 The Western Conference this weekend includes some intriguing rematches, a big interconference matchup and the arrival of the home opener for Las Vegas Lights FC. Here are five storylines to follow as we move through the action.

It’s pretty good to be Phoenix Rising FC’s Santi Moar right now. The Spanish winger has recorded goals in five consecutive games to start the 2021 USL Championship season to earn nomination for the league’s Player of the Month award for April and May, and his overall scoring streak in regular season games is now at six games overall dating back to the 2020 season. That’s one off tying the club record held by Solomon Asante of seven consecutive games with a goal, and two back of Hadji Barry, who scored in eight consecutive games for Sporting Kansas City II back in the 2018 season.

As Phoenix gets ready to host San Diego Loyal SC on Saturday night with both marks in sight, though, Moar is aiming to enjoy the moment as the side looks for its fifth win in six games to start the campaign.

“Sometimes you need that extra confidence, that extra momentum when you’re trying to score goals, and right now they’re coming my way,” Moar told the USL’s Kelsi Steele on this week’s edition of the Steele Some Time podcast. I’m just happy I’m getting minutes, I’m getting consistency in the attack from this great team and the goals are coming right now, but probably later in the season they will not come, so I’ve just got to enjoy the moment right now and have a good game.”

Finding success in front of goal is nothing new for Phoenix, which last year saw Jamaican international Junior Flemmings claim the Golden Boot with 14 goals to take over from Asante, who led the league with 22 goals in 2019. Moar puts the credit not only to his teammates and the standards they’ve set in training, but also the ownership and staff that have assembled a wealth of attacking talent.

“It’s so much fun to be training and playing every single day with these guys,” said Moar. “The quality every session is high, and we love it as a player, but I think a lot of the credit has to go to the ownership and the coaching staff for assembling this great group of players. For the past three, four years they’ve been doing an amazing job doing that and for us it’s just great to be part of this organization.”

TOROS READY FOR TEST IN MIAMI

The addition of interconference matchups this season has added some intrigue to the debate over which of the Eastern or Western Conference may be stronger this season, and in Sunday’s game that sees Miami FC play host to Rio Grande Valley FC at FIU Stadium we get a matchup of early playoff contenders that could provide some insight as to which way the balance leans in the Championship overall.

The Eastern Conference holds a slight 3-2-1 edge so far this season in part thanks to victories by the Tampa Bay Rowdies against Phoenix Rising FC, and Louisville City FC against San Diego Loyal SC. That and the fact that the Toros have to travel to South Florida for the matchup could be a mark in favor of the hosts on Sunday, but Rio Grande Valley’s Juan Carlos Azocar and his side are confident they can put in the performance to get a result.

“Well, we know it will be a difficult match,” said Azocar through a translator this week. “We know that Miami has been doing things well, but we are focused, and we continue working on what we do, what we believe in and on our style of game. We have not yet played against Miami, they haven’t played us either, so they also have a very difficult game against us. We are a great team with good players, good coaching staff, so we are going to Miami to win, God willing.” 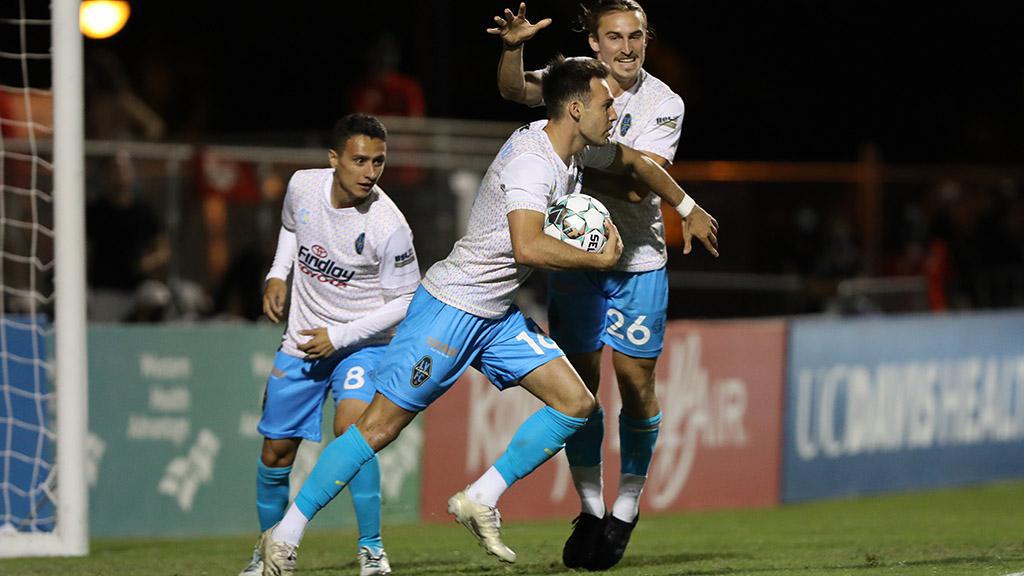 Things haven’t gone Las Vegas Lights FC’s way so far this season, but forward Danny Musovski is certainly looking forward to the club’s home opener on Saturday night as Tacoma Defiance visit Cashman Field. A local standout at Liberty High, where he earned Nevada’s Gatorade High School Player of the Year award in 2013, and the University of Nevada - Las Vegas growing up, Musovski scored his first professional goal at Cashman Field in 2018 for visiting Reno 1868 FC, but now he’s hoping for more success as part of his hometown club as it continues to build the broader soccer community in the city.

Currently on loan to Lights FC from Major League Soccer’s Los Angeles FC – for which he recorded five goals a season ago – Musovski will have family and friends in the stands on Saturday night as Head Coach Steve Cherundolo’s side looks to make a big first impression on the fans.

If there was a lesson Colorado Springs Switchbacks FC took away from it’s season-opening contest against San Antonio FC at Toyota Field, it’s that they’re going to have to be ready to match the intensity the side brings over the course of 90 minutes. Failing to do that on May 1 resulted in a 3-0 defeat when these teams met for the first time this season, but as the Switchbacks prepare for Saturday’s game at Weidner Field the side believes it’s got what it needs to compete more strongly this time around.

“I think it was obvious last time we played San Antonio that we didn’t match them physically,” said Switchbacks defender Matt Mahoney this week. “We need to match the energy we’ve showed in the last couple games. San Antonio are a physical, intense team and if we match that, we can get a win with who we have going forward.”

Colorado Springs certainly would love a repeat to the start of its home opener two weeks ago against New Mexico United, where Hadji Barry scored his third goal of the season in just the second minute to stake the hosts to an early lead. The game didn’t go to plan from there for the side, but claiming a first win at the club’s new home would provide a major confidence boost ahead to start a busy upcoming month.

“We have to do everything we can to be proactive – I don’t think we have the luxury of shifting lineups too much yet because we still don’t have a couple of our top guys available to us,” said Switchbacks Head Coach Brendan Burke. “The physical intensity of the game is all you can do, so we agreed in the locker room before we even left San Antonio that it would never happen to us again.”

BUSY SCHEDULE PICKS UP FOR SACRAMENTO

The intensity of Wednesday night’s 3-3 draw between Sacramento Republic FC and Oakland Roots SC was there for all to see as the new rivals met for the first time at Heart Health Park, but that same intensity is likely to see some squad management for Head Coach Mark Briggs as the side continues a stretch of four games in 12 days on Saturday night as Orange County SC comes to visit for the second meeting of the season.

“I can't expect the players to be able to handle 90-minute matches with the demands I put on them in the system we play,” said Briggs on Wednesday night. “So, that creates opportunity for each and every one of the squad players, and we'll have to reassess and see where we're at from a health standpoint and from a fitness standpoint when we go again in two days-time against Orange County.

“I think we've got a squad of players that we can rotate and can bring the level of intensity that we need.”

Saturday’s game is the second meeting of the season between the longtime rivals, with Orange County having squeezed out a 1-0 win at Championship Soccer Stadium two weeks ago to start what is currently a three-game winless streak for Republic FC. The form the side’s attack showed against Oakland – and the strong performance put forward by Cam Iwasa in particular – provided some spark that could lead to a better result this time around for the hosts.

“I was really pleased with Cameron,” said Briggs. “I thought he was a threat all night. Obviously, he got his goal as well, and he could have had another one. … We want him to be a threat and we know that he can score goals, and he's getting back to what we're all used to.”