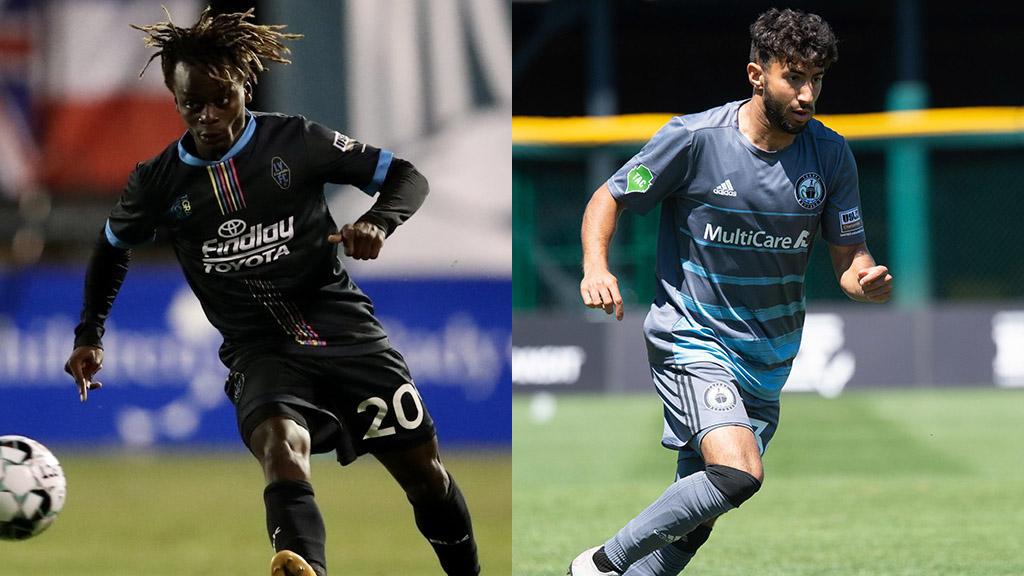 Las Vegas Lights FC's Frank Daroma and Tacoma Defiance's Issa Rayyan will be looking to find the net as their sides meet for the first time this season at Cashman Field on Saturday.

LAS VEGAS – Las Vegas Lights FC hosts its home opener at Cashman Field on Saturday night looking for its first win of the season as it plays host to a Tacoma Defiance side that has made an undefeated start to the campaign. Kickoff is scheduled for 10:30 p.m. ET.

@LVLightsFC (0-4-0, 0pts) narrowly missed out on its first point of the season last Saturday night as it was unable to hold on late in a 2-1 defeat against San Diego Loyal SC. Alvaro Quezada scored the opening goal of the game for Las Vegas off an assist by Cal Jennings, who has been one of the bright spots for Lights FC so far this season. A former standout at Memphis 901 FC, Jennings was acquired this offseason by Los Angeles FC of Major League Soccer and has started all four games for Lights FC on loan this season, recording seven shots and five shots on target in addition to one goal. Lights FC goalkeeper Alex Rando has also shone in his first professional season, recording 22 saves across his first three games. Las Vegas will be hoping for a repeat performance from when Tacoma visited Cashman Field last season, when it took a 3-1 victory that also served as its first win of the season in its fifth outing on that occasion.

@TacDefiance (2-0-1, 7pts) has made an undefeated start to this campaign, however, but will be returning to action for the first time since May 16 as it heads to Las Vegas after inclement weather led to the postponement of its most recent scheduled contest last Sunday night against Austin Bold FC. Tacoma currently sits third in the Pacific Division despite having only played three games this season as five different players have found the back of the net so far this season. One absence for the Defiance on Saturday will be Alec Diaz, who was selected for the Puerto Rico Men’s National Team this week as it competes in FIFA World Cup Qualifying, but the visitors should still have a strong lineup to challenge Lights FC this time around.