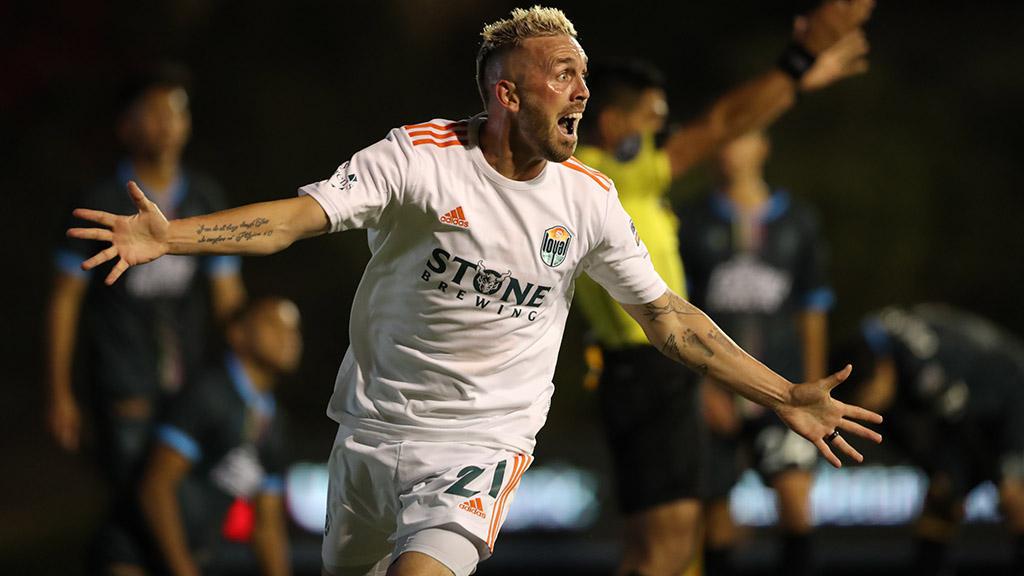 There were some late thrills throughout the Western Conference’s action on Saturday night, and the weekend produced some surprising performances as well as more expected ones. Here are five talking points coming out of Week 6 in the regular season.

It was almost like watching the Big Bad Wolf try to blow over the house made of bricks, the way San Diego Loyal SC was pushing for a late winner in its contest on Saturday night. Starting in the 86th minute, the hosts took seven shots, four of which were saved, one of which was blocked, and another that missed the target. The seventh, however, finally found the back of the net as Corey Hertzog bundled home his first goal of the season and gave SD Loyal its first three points of 2021 in a 2-1 victory against Las Vegas Lights FC to delight a loud Torero Stadium in its home opener.

By any measure, it was a win that San Diego on balance probably deserved. The hosts posted an Expected Goals mark of 3.28xG, the highest in the Championship this weekend, as it recorded 21 shots, including 16 from inside the penalty area. But with the way the side’s fortunes had been going so far this season, it wouldn’t have been out of the realm of possibility that those late chances had come to naught. In the end, though, the pressure San Diego applied and the introduction of Miguel Berry – who helped spark the comeback after his introduction 10 minutes into the second half – made the difference and hopefully helped SD Loyal turn a corner before a rematch with Phoenix Rising FC next weekend.

“Everything was about putting pressure on them today,” said Assistant Coach Nate Miller. “I thought our high pressure was good. We were able to settle in and take control. We did a good job sticking to the game plan, plugging away and eventually the moment came. You can see what Miguel Berry can do. He’s just a handful. He occupied two, three, four defenders sometimes and really allowed us to come in through the lines.”

It’s official, there’s no-one hotter in the Championship right now than Phoenix Rising FC’s Santi Moar. The Spaniard’s fifth consecutive game with a goal this season – a streak that currently sits at six overall after his tally in Rising FC’s last game of the regular season in 2020 – lifted Phoenix to a big 1-0 road win against Sacramento Republic FC that not only broke Phoenix’s winless run in California’s capital but also saw Moar break a scoreless streak for the club in Sacramento that stretched back to its first visit in 2014.

The 27-year-old is proving clinical in his finishing right now, which accounts for his current league-best xG overperformance as well as sitting tied for the lead in the Championship’s Golden Boot. Moar’s current Expected Goals for the season sits at 1.66xG according to American Soccer Analysis, a gap of 3.34 to his current goal total of five. That might seem like an outlier, but it speaks to how sharply Moar is taking chances when they come to him whether from inside the penalty area as against Sacramento or picking out a long-range strike as he did against Tampa Bay two weeks ago.

Those goals are paving the way for Phoenix to maintain its position as one of the favorites to reach the USL Championship Final again in the fall.

“These are the type of wins that will get you first place at the end of the year when you to have to fight for it,” Rising FC Head Coach Rick Schantz told the Arizona Republic. “Rather than just getting point, getting three on the road is unbelievable.” 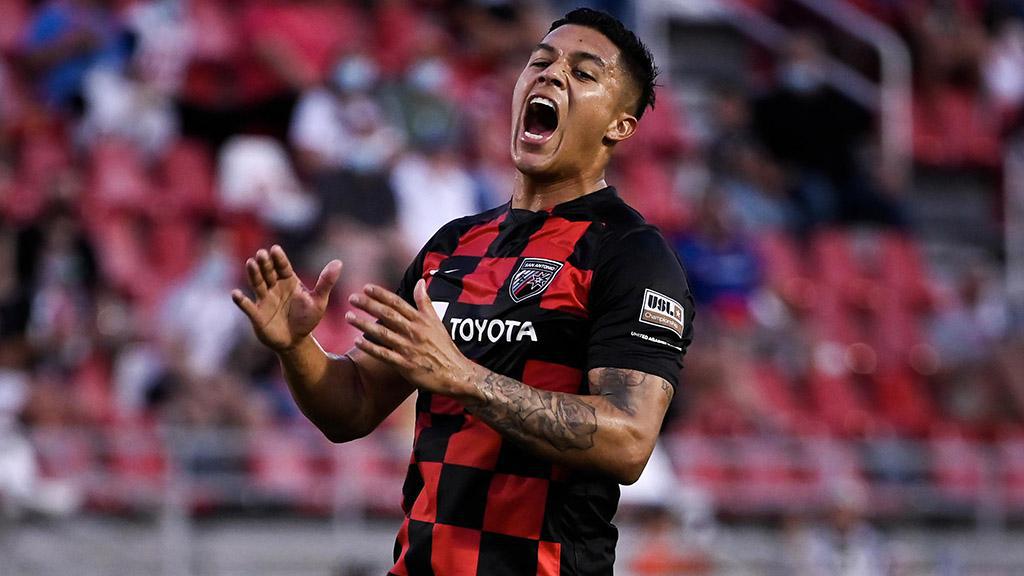 It was a frustrating night in front of goal for San Antonio FC's Santiago Patino and his teammates as they recorded 10 shots on goal but could only find the net once in a 1-1 draw with Rio Grande Valley FC. | Photo courtesy Darren Abate / San Antonio FC

There’s no question that Saturday night’s 1-1 draw between San Antonio FC and Rio Grande Valley FC will be remembered for Juan Azocar’s spectacular bicycle kick finish for the Toros in the 89th minute that grabbed the visitors a point, but what’s going to stick in the back of the minds of San Antonio’s players and staff is the nine-save performance by RGVFC goalkeeper Tyler Deric that saw SAFC prove unable to put the game to bed when it had the chance.

“We created more than enough opportunities to win that game,” said San Antonio Head Coach Alen Marcina. “I don’t know what the count was, but I know it was high. The type of opportunities that we created were high percentage opportunities. We have to be more clinical and put teams away. As a collective we defended really well. That’s soccer.”

San Antonio certainly created a lot of chances – it outshot RGV 14-10 overall and 10-4 in shots on target after the visitors opened the game brightly – but the quality of the chances via analysis showed a different story. Fivethirtyeight.com’s shot-based Expected Goals model gave San Antonio only a 1.3xG mark, while American Soccer Analysis put it at 0.79xG, so while the chances might have been there, they might not have been as prime as it appeared on first glance.

There’s something inspirational about second-half comebacks, the way the momentum seems to be tilting your way after going behind, but the reality of the situation is that it can take a lot of effort to get back into a game when you’re playing from behind, and one that energy’s gone, it can prove fatal at the other end. That seemed to be the way it worked for Orange County SC on Saturday night, which after rallying back from a two-goal halftime deficit just seemed to run out of gas a little, allowing the LA Galaxy II to grab a late 4-3 victory in the 405 Derby at Championship Soccer Stadium.

“I think we just need to start the game like we started the second half,” said OCSC Head Coach Braeden Cloutier. “I mean we can’t afford to go down three goals in the first half of the game and at home, of all places. I think the attitude and the effort in the second half was tremendous, but we’ve got to do that for 90-plus minutes, we can’t just do that for a second half.”

It typically takes a pretty strong side to consistently rally from deficits. Since the start of the 2020 Championship season, that hasn’t really been in Orange County’s bag, with the side having only claimed four points from losing positions. With a rematch with Sacramento Republic FC coming up next Saturday, getting out on the front foot is going to be essential to finding points on the road.

It’s become such a hallmark of the way New Mexico United plays, when the opening 10 minutes of the game – especially in front of the club’s passionate home support – doesn’t produce some big moments and put visitors on their heels, it’s surprising. But that was the case in United’s 1-0 defeat to Loudoun United FC on Saturday night that saw the side strive for an equalizer after Jovanny Bolivar had put the hosts ahead five minutes before halftime but ultimately come up short.

“What I told the guys at the end is that the truth of the game lies in the first 20-25 minutes, and we weren't good enough,” said Lesesne after the game. “When you come out and you don't take the initiative, that's not like us. The response after that was absolutely phenomenal, and I think these guys put everything that they had into getting the result, either with the draw or obviously trying to go for the win. But again, the first 20-25 minutes was lackluster. And that's where we have to take ownership and accountability to move forward and say, ‘we have to improve in the beginning of the game.’”

Whatever else there was to take away from the display – and certainly there were positives in the second half as Ilija Ilic among others looked dangerous after coming on, denied an equalizer by an offside flag – you can expect United will be very much ready to go next Friday night when it heads to face Real Monarchs SLC in its next outing.