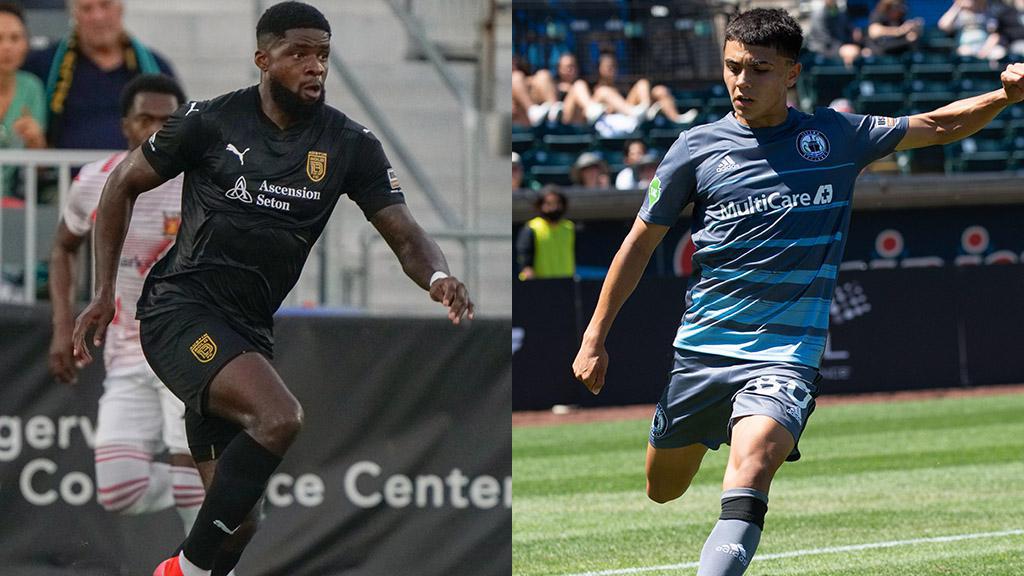 Austin Bold FC's Sean Okoli and Tacoma Defiance's Ray Serrano will look to lead their sides to victory on Sunday night when the sides meet at Bold Stadium.

AUSTIN, Texas – Austin Bold FC will try to build on its first victory of the season in midweek as it welcomes the undefeated Tacoma Defiance to Bold Stadium on Sunday night. Kickoff is scheduled for 9 p.m. ET.

@AustinBoldFC (1-1-1, 4pts) earned a 2-0 victory on Wednesday night against Real Monarchs SLC in its home opener at Bold Stadium as goals by Sean Okoli and Jorge Troncoso sealed the club’s third consecutive win in its home debut. Okoli’s first goal for Bold FC came from the penalty spot, and the side will be hoping that may spark the 2016 Championship Golden Boot winner as the club has rounded into improvements each time out so far in the season. Austin has failed to take victory in two prior meetings with the Defiance, however, with the sides having played to a 1-1 draw the last time Tacoma visited in 2019, and with ground to be gained on the leaders in the Mountain Division, Bold FC will be eager to pick up its first back-to-back wins since victories against Rio Grande Valley FC and the Portland Timbers 2 late in the 2019 campaign.

@TacDefiance (2-0-1, 7pts) returns to action looking to build on consecutive victories at home in what has been a strong start to its seventh season in the Championship. Tacoma earned a 3-1 victory against San Diego Loyal SC in its home opener and followed that up with a 1-0 win against Orange County SC in its last outing on May 16 to sit in third place in the Pacific Division going into this weekend’s action. Alfonso Ocampo-Chavez scored the lone goal against Orange County, becoming the fifth different Defiance player to find the net this season as the side lead by new Head Coach Wade Webber has made the most of its opportunities with a 25 percent shot conversion rate, currently the best in the Championship.