Six players including Adams, Steffen, Aaronson headed to Denver for finals next month 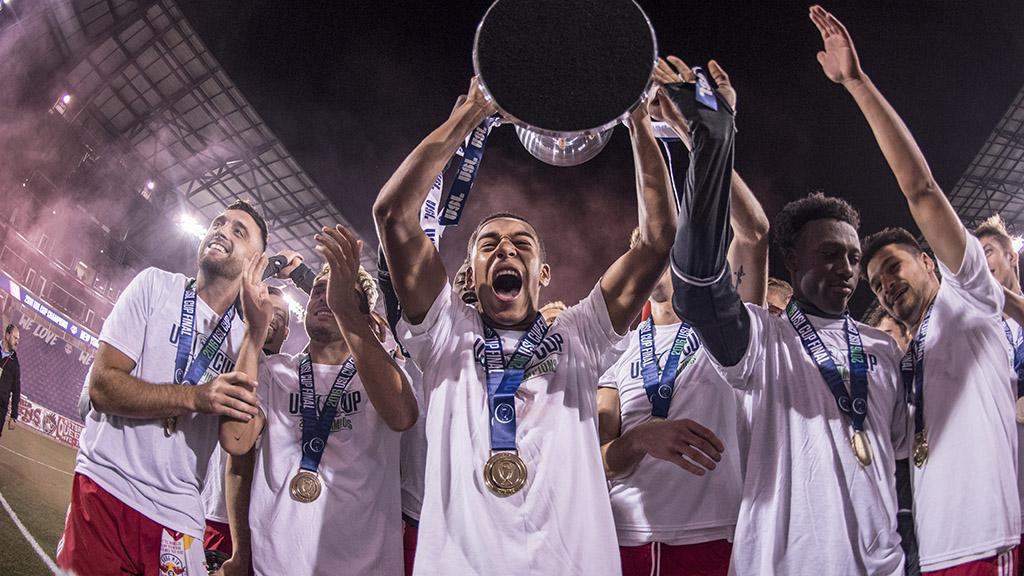 CHICAGO – The 23-player U.S. Men’s National Team squad for the finals of the 2021 Concacaf Nations League was announced on Monday and featured six players that previously competed regularly in the USL Championship at the start of their careers. Leading the sextet are two former Championship Final winners in midfielder Tyler Adams and goalkeeper David Ochoa, with recent Premier League title-winner Zack Steffen and others also named in the group.

Here’s a look at all six that have cumulatively totaled more than 115 appearances and 8,500 minutes of action – with the LA Galaxy’s Sebastian Lletget also having played one game in 2015 on loan with the Galaxy II – and their histories in the Championship.

Brenden Aaronson, Philadelphia Union II (2017-18): Aaronson is the first of two players that came through the Union II on his way to Europe, where he this month won the league and cup double with Red Bull Salzburg in Austria. Aaronson made 24 appearances and recorded one goal and five assists for the Union II across his two seasons, and helped the side claim its first postseason victory when it defeated Pittsburgh Riverhounds SC in a penalty shootout in the 2018 USL Championship Playoffs.

Mark McKenzie – Philadelphia Union II (2016-2019): It’s remarkable to think that its only been two years since Mark McKenzie last suited up in the Championship for his final six appearances for the Union II, but that’s how quickly the big center back has risen up the depth chart for the USMNT. McKenzie made his debut for the Union II in 2016 and made a total of 17 appearances overall, recording 31 interceptions and 68 clearances in his final three years.

David Ochoa – Real Monarchs SLC (2018-20): Ochoa was thrown in at the deep end for his Championship debut in 2018 on the road against the Tampa Bay Rowdies – which marked his only appearance that year – but the following season he showed why he’s been highly touted as a potential USMNT goalkeeper of the future. After making 20 appearances in the 2019 season that saw him record four shutouts and 69 saves in leading the Monarchs to victory in the USL Championship Final, the 20-year-old is now on the path many had envisioned for him for both club and country three years ago.

Zack Steffen – Pittsburgh Riverhounds SC (2016): Steffen arrived with Pittsburgh Riverhounds SC on loan from Columbus Crew SC after returning from an early stint in Europe, and arguably began his ascent to the top of the USMNT goalkeeping depth chart at Highmark Stadium. In nine appearances for the Hounds, Steffen recorded two shutouts and 37 saves before returning to Columbus the following year and becoming the club’s No. 1. Now at Manchester City, Steffen is entering his prime at the top of his game.

Jackson Yueill – Reno 1868 FC (2017-18): Selected with the No. 6 pick of the 2017 MLS SuperDraft by the San Jose Earthquakes, Yueill began his professional career on loan with 1868 FC and made a big early impression that six starts was all that was needed to return to the MLS side. Yueill won 9 of 12 tackles and complete 223 of 262 passes (85.1%) in his time with Reno and has now become one of the top holding midfielders in Major League Soccer with the Quakes as well as a USMNT regular.