TAMPA, Fla. – The USL Championship announced the Team of the Week Presented by Cleer Audio for Week 4 of the 2021 regular season on Tuesday, with Birmingham Legion FC’s Matt VanOekel being voted Player of the Week after recording a five-save shutout and notching the assist on the lone goal in his side’s 1-0 victory against Memphis 901 FC on Saturday afternoon at Legion Field.

One of Legion FC’s early signings before its inaugural season in 2019, VanOekel has been part of the backbone of a squad that has earned back-to-back postseason appearances in its first two years. His five-save performance against Memphis was his 16th regular-season shutout in 44 appearances for Legion FC, while his assist on Neco Brett’s goal that proved decisive in the win was the 10th recorded by a goalkeeper in the Championship’s regular season since the start of the 2017 season and the sixth time a goalkeeper had recorded a shutout and an assist in that span.

VanOekel earned 47 percent of the ballot for his performance, narrowly edging out Colorado Springs Switchbacks FC’s Michee Ngalina on 40 percent after the winger recorded one goal and two assists in his side’s 4-0 victory against Sporting Kansas City II on Friday night. 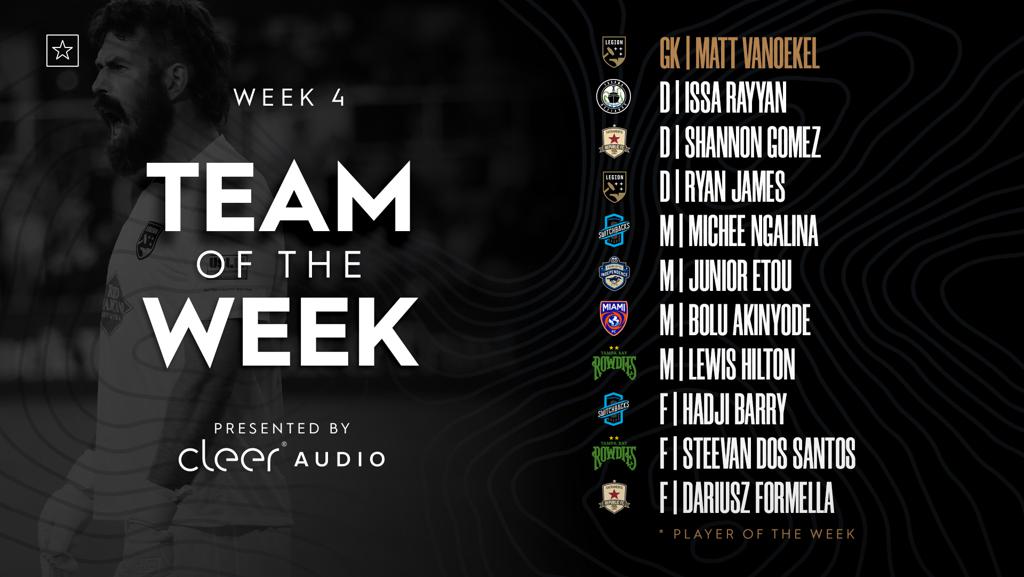 M – Junior Etou, Charlotte Independence: Junior Etou put in an impressive display in the center of midfield, winning 13 of 17 duels and making 11 recoveries while completing 29 of 40 passes in Charlotte’s 3-0 win against the Charleston Battery.

F – Steevan Dos Santos, Tampa Bay Rowdies: Steevan Dos Santos shone again for his new side, scoring what proved to be the game-winning goal in a 2-1 win against Phoenix Rising FC while winning 12 of 23 duels and recording seven shots overall.