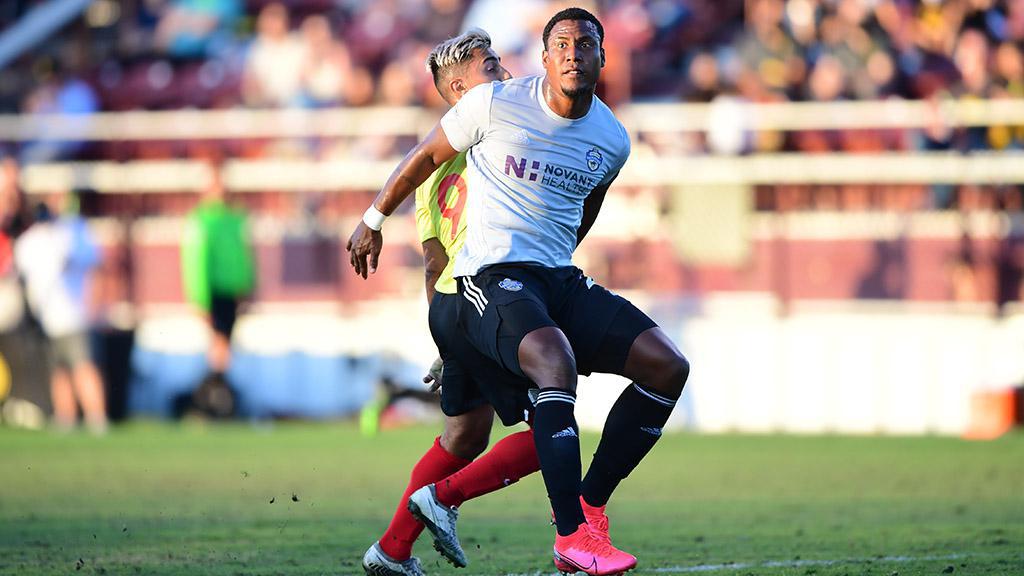 After a weekend that saw the Tampa Bay Rowdies continue their impressive start at the top of the Atlantic Division, here are five talking points coming out of the Eastern Conference after Week 4.

CHARLOTTE GETS A LEG UP IN CHARLESTON

Within the opening five minutes of Friday night’s clash between the Charleston Battery and Charlotte Independence, it was almost the same old story for the Southern Derby rivals. The fact was, the Independence had never won in Charleston since joining the league in 2015 and hadn’t defeated the Battery since 2016. Stavros Zarokostas’ initial foray into attack that saw him rattle the post with a great effort from the left side of the penalty area could have set the tone for both those trends to continue.

Instead, the Independence flipped the script. A brilliant free kick by Jake Areman that caromed off the crossbar to allow Marcelo Palomino to nod home the opening goal, and a second shortly after by Irvin Parra paved the way for Charlotte’s 3-0 victory and a serious boost of confidence in their second game of the season. The Independence looked the more threatening throughout, winning the individual battles around the field on what ended up as a landmark night for the club against its biggest rival.

“We played very well. The early goal was a huge confidence boost for us,” said Independence Head Coach Mike Jeffries. “Defensively, I thought we did a really good job keeping our shape, and on a tough field we had stretches where we moved the ball very well. The second goal was very good from us in terms of the build-up, it set a good tone and put us on the way to a good result.”

After suffering a setback to start the season in Tampa Bay, the Independence have plenty to build off moving forward.

Going into Saturday night’s highly-anticipated matchup between the Tampa Bay Rowdies and Phoenix Rising FC, maybe the biggest storyline was how the Rowdies’ vaunted defense led by reigning Championship Defender of the Year Forrest Lasso would fare against Rising FC’s dangerous attack led by reigning Most Valuable Player Solomon Asante.

The answer we got was impressive.

The Rowdies may have seen their early-season shutout streak come to an end in their 2-1 victory that moved the side to 3-0-0 this campaign, but the chances Phoenix created were few and far between. Rising FC registered only four shots from within the penalty area, of which only one forced a save from Rowdies goalkeeper Evan Louro. As a result, Tampa Bay held Phoenix to its second-lowest Expected Goals total since the start of the 2018 season according to American Soccer Analysis.

The Rowdies accomplished this in part by consistently pushing to add to their lead, even when Santi Moar’s goal in the 68th minute for Phoenix on an exceptional finish threatened to turn the contest. Rising FC only registered one more shot compared to the Rowdies’ four as the hosts saw out the game expertly. 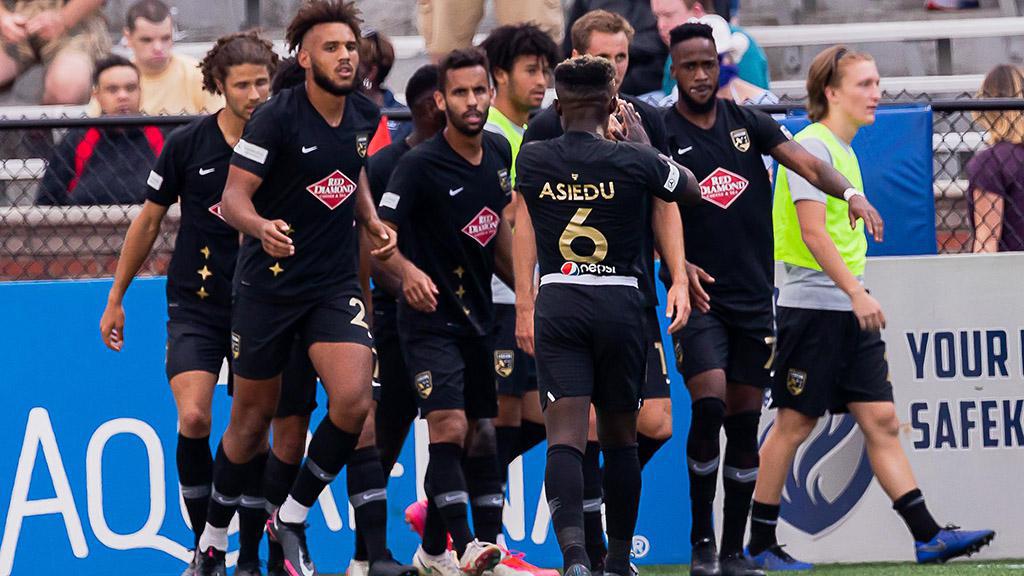 Birmingham Legion FC impressed at Legion Stadium on Saturday afternoon with a full-strength attack finally on the field, and raised the potential of returning to the venue in the future with the atmosphere generated by the fans on hand. | Photo courtesy B

Birmingham Legion FC produced a solid display to earn its first point of the season on the road against Louisville City FC in Week 3, but Saturday’s performance before a club-record crowd of 10,117 fans in its first game at Legion Stadium showed the potential the side has when at full strength. The final score might have only been 1-0 against Memphis 901 FC, but the attacking display that was thwarted brilliantly at times by 901 FC goalkeeper John Berner should be a warning to future foes.

The hosts put 10 shots on target, tied for the second-most so far this season in a game, and on another day might have come away with a bigger reward. The introduction of Junior Flemmings for the first time in Legion FC’s colors certainly made an impact as he looked to link up with Neco Brett, J.J. Williams and Bruno Lapa in what looks like an intimidating attacking quartet.

“It was an electric atmosphere, the pitch played really well, and you could tell our guys enjoyed it by the way they were knocking the ball around,” said Legion FC Head Coach Tom Soehn. “We created tons of chances, and I wish we had scored a few more to make it easier on ourselves. But we got the three points, and I think we gave our fans a pretty good show along the way.”

Legion at Legion came about due to pitch maintenance at Birmingham’s regular venue of BBVA Field, but the way the side performed and the atmosphere the larger venue provided might suggest this shouldn’t be the last game Legion FC takes to the historic venue.

“It was wonderful, I liked the atmosphere,” said Brett. “I haven’t played in a crowd like this before. We got extra energy from the fans and that's what we always want as the home team, you know what I mean? We want to use our fans as the 12th player. The fans help us to get extra energy when we need it.”

The overall performance by Hartford Athletic wasn’t to the satisfaction of Head Coach Harry Watling on Saturday night – “If I’m being honest, the effort was there, quality wasn't tonight,” Watling said after the game – but the fact the side was able to pull a point out of the fire in second-half stoppage time to earn a 1-1 draw against Pittsburgh Riverhounds SC showed an impressive determination that could carry the side far as the season progresses.

Boosted by a crowd at 50 percent capacity at Dillon Stadium, Luka Prpa’s header off Danny Barrera’s free kick from the right provided the payoff that the 2,750 fans on hand came out hoping to see.

“The crowd were unbelievable in the second half, that's why we equalized in my opinion, drive us on,” added Watling. “I just said to the boys we switched to a Four-Four-Two later on in the second half and put them under a little bit more pressure.”

The Athletic are still, despite their 2-0-1 record, a work in progress due to the turnover on the roster and Watling’s arrival as Head Coach this offseason. Taking an undefeated record into the club’s upcoming bye week, though, has made for a very positive start to 2021.

“I think we need to address some things, as usual, we need to build on things,” said Watling. “Second half I thought we kept the ball really well, but we need to penetrate more, we need to play through more, be more vertical if we can, and that's about players being brave. … We’ll enjoy watching the other teams that the weekend, and then go from there.”

There was a certain poetry to a pair of former New York Red Bulls II players providing key elements to the lone goal of Miami FC’s 1-0 victory at MSU Soccer Park on Friday night, with Janos Loebe delivering the initial ball that found its way to 2016 USL Championship Final winner Speedy Williams to deliver a rasping finish that went in off the underside of the crossbar.

The reality of the contest, however, was Miami is still creating, but not finishing chances clinically enough so far this season. With New York pushing for an equalizer in the second half, the visitors had chances to put the game away but was unable to find the net. Red Bulls II goalkeeper AJ Marcucci deserves some credit for that after coming up with five saves, but Miami will know it needs to be better moving forward, especially with a clash against the Tampa Bay Rowdies coming next on Saturday.

Miami currently ranks fifth in the Championship in Expected Goals according to American Soccer Analysis at 4.50xG but has only two goals to show for it so far. That execution level needs to pick up to sustain a strong challenge in the Atlantic Division.