ST. PETERSBURG, Fla. – Saturday night’s clash between the Tampa Bay Rowdies and Phoenix Rising FC at Al Lang Stadium (8 p.m. ET | ESPN2) has almost everything you could ask for in a contest.

Two star-packed rosters including talent that has earned All-League recognition and international selection at the senior national team level. Two systems that could produce a fascinating tactical battle on the field, and two clubs that aspire to not only be the biggest in the USL Championship year-in and year-out but become landmark clubs in the United States soccer landscape.

Ahead of the nationally televised clash, here are three things to watch for as the two leading USL Championship Final contenders square off. 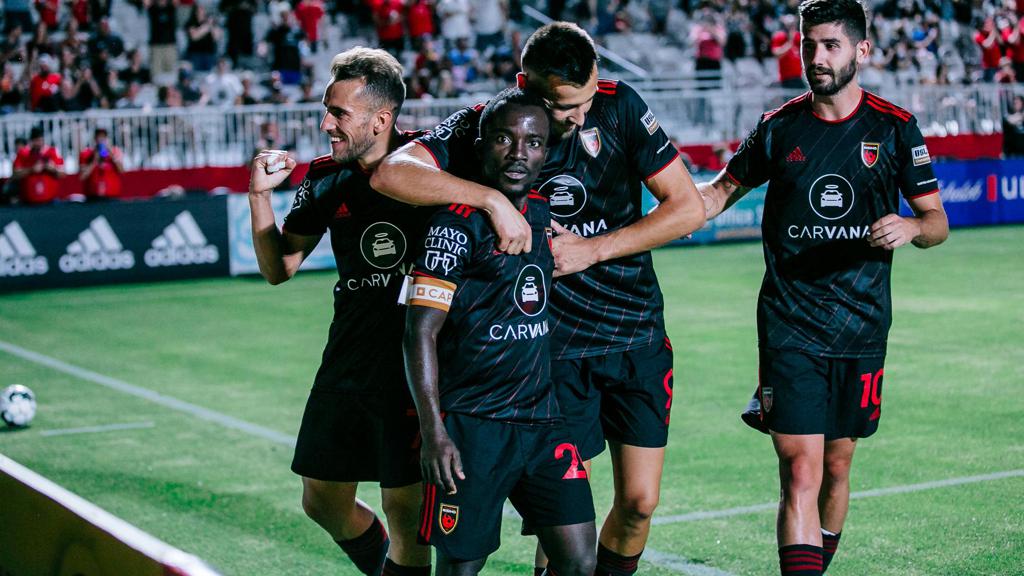 Phoenix Rising FC's standout attacking trio of Santi Moar, Solomon Asante and Rufat Dadashov will take on one of the best defenses in the league in the Tampa Bay Rowdies on Saturday night. | Photo courtesy Ashley Orrellana / Phoenix Rising FC

The most interesting matchup comes as not only a function of the systems the clubs play, with the Rowdies’ defensive back three going up against Rising FC’s attacking trio in its 4-3-3 formation, but also how aggressive Tampa Bay typically lets its wing backs be in pushing up the field. The spaces that is an area that Phoenix is going to look to exploit, with two players in Santi Moar and Solomon Asante that know how to make the most of space when it’s offered them.

“It’s pretty widely known that when you play a back three, you have to separate the three of them as best as possible,” said Rising FC Head Coach Rick Schantz this week. “So, can we have Solo and Santi stay wide? When we watched Tampa, Conner Antley and Leo Fernandes, and sometimes [Sebastian] Dalgaard, they’ll stay high and they’ll really try to press your full backs. So, in transition you can’t be narrow, you’ve got to be wide and create the one-v-one scenarios in wide spaces.”

With Aaron Guillen and Jordan Scarlett typically manning the edges of Tampa Bay’s back three, Forrest Lasso is set to match up with Phoenix’s powerful forward Rufat Dadashov in what should be a major individual matchup to watch over the 90 minutes. For Schantz, forcing Lasso into defending laterally is the aim instead of delivering crosses that serve as meat and drink to the two-time Championship Defender of the Year.

The Rowdies have come up with two shutouts in two games so far this season but will have their hands full if they’re going to rack up another clean sheet on Saturday. 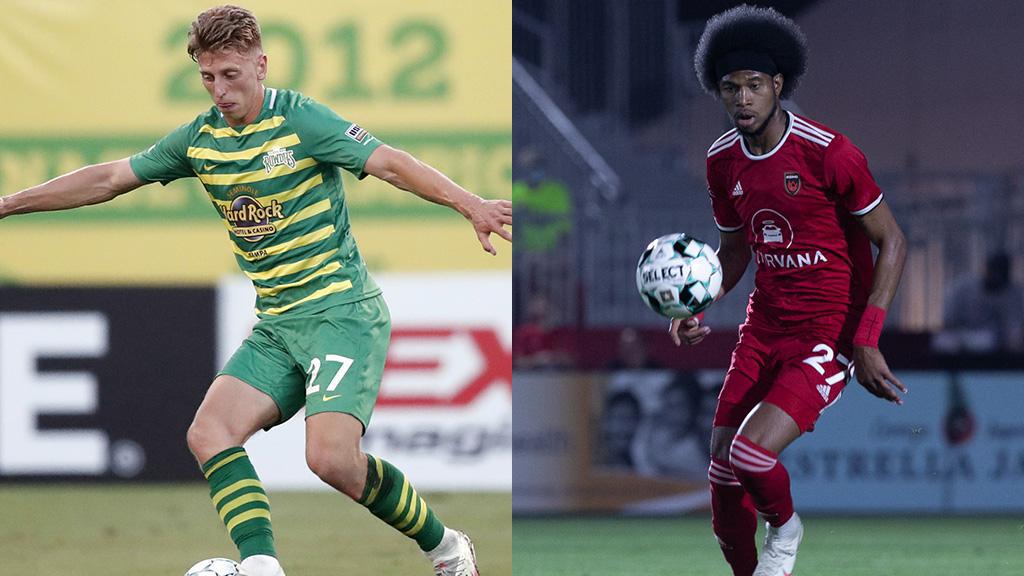 Ask most players or coaches, and they’ll tell you the space where games are won or lost is in the midfield. If you can control that space – both with the ball and without – then you’re setting yourself up for success.

On the face of it, Phoenix might have the best interior midfield trio in the league with former Championship MVP finalist Aodhan Quinn teaming up with Jamaican international Kevon Lambert and Jon Bakero to make a group that can not only all win possession but distribute smartly in transition as well. But going by the numbers in each club’s two outings, it’s the Rowdies that have had a little more bite and control over games with new addition Laurence Wyke quickly slotting in alongside Zach Steinberger and Lewis Hilton in the club’s 3-0 win against Pittsburgh Riverhounds SC.

Tampa Bay won 65 percent of its duels against the Charlotte Independence and posted a passing accuracy rate of 81.8 percent in its opening contest before winning 56 percent of its duels and completing 82.1 percent of its passes against the Hounds. Phoenix hasn’t matched those numbers in either of its two outings this season, and in fact came out on the short end in duels against Oakland Roots SC last weekend, winning only 44 percent. If the Rowdies are on their game, it could take Phoenix out of its comfort zone in the middle and give the hosts an edge. 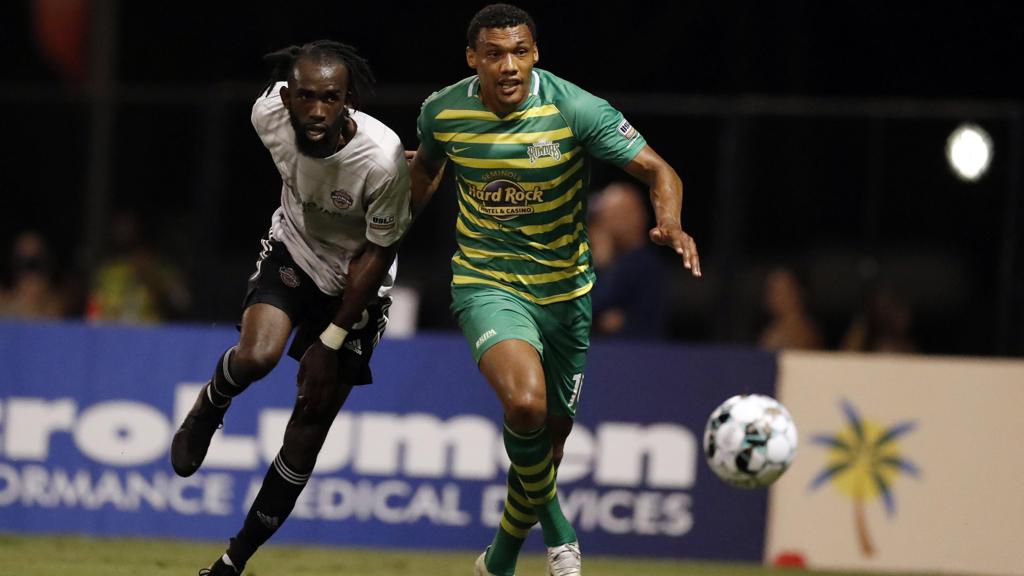 Whoever Phoenix Rising FC elects to start at center back on Saturday night, it’s likely going to be a familiar face to Tampa Bay Rowdies forward Steevan Dos Santos. The Cape Verde striker played not only with Joe Farrell at the Rochester Rhinos during the 2016 season, but more recently was a teammate of Tobi Adewole at Pittsburgh Riverhounds SC up until the end of last season.

That familiarity should add to an intriguing potential matchup between Dos Santos,Sebastian Guenzatti and Rising FC’s back line, which through two games has allowed only one goal in play while posting a 0.96 Expected Goals Against mark, a figure narrowly lower than the Rowdies’ defense has posted. The arrival of Dos Santos has brought a new element to the Rowdies this season in the eyes of Schantz.

“[He’s] a huge addition to them because now they have a target forward,” said Schantz. “I think they were such a well-organized defensive group last year that with [Juan] Tejada, Guenzatti, they would spring you on the counter, they could find spaces in behind inm {?} technically very gifted, they could get a lot of numbers forward. Now, if you have them pinned back and they play out, they have a guy who can hold the ball up and it makes them really multi-dimensional.”

At 6-foot-4, Dos Santos has been one of the most physically imposing forwards in the league since he joined the Rhinos for the 2015 season, and since the Championship began using Opta data in 2017 there is no player who has won more duels in the regular season than Dos Santos’ 917. His ability to bring teammates into the attack, or spring Guenzatti or attacking midfielder Zach Steinberger forward, could be an essential ingredient for the Rowdies as they look to defend their home turf.