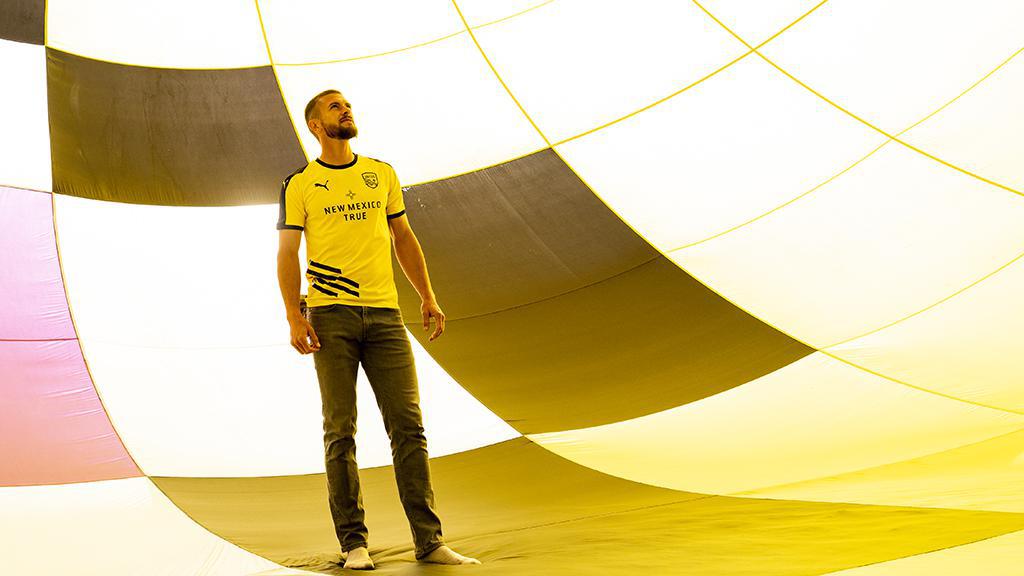 One of five New Mexico natives in the current New Mexico United squad, Las Cruces’ Josh Suggs has been one of the faces of the club since signing prior to its inaugural season in 2019. This Saturday night, Suggs and his teammates will return to Isotopes Park for the first time in more than a year-and-a-half as they host Austin Bold FC (9:30 p.m. ET | ESPN+) for their home opener.

We caught up with Suggs to talk about how spending 2020 on the road pulled the team and its fans closer together, the evolution of the game in the United States during the decade he’s spent in the professional ranks, going up in a hot air balloon for the first time in a recent photo shoot, and what Saturday night is going to mean for him as United returns home to The Lab.

Nicholas Murray: When you first started out in the pro ranks, 10 years ago with what is now Orange County SC, did you ever envision the way the soccer landscape in this country would change the way that it has?

It was a real struggle back then to be a professional soccer player, playing in the USL, whereas now guys can make an honest living, there’s actually a lot of fans at games, we have so much support, and the game in general has grown so much.

NM: What does it mean now to not only still be in the game, but representing your home state at New Mexico United?

JS: For me, to be involved in the game, I don’t know if I really process that. I take it year-to-year, and I always think at the end of every season, ‘Well, you know what, I’ll play another one.” So, that’s kind of my mindset as far as that goes. When I’m done with my soccer career, then I can look back and think about all the years I put into it and what I accomplished.

As far as representing my state, that is huge, man. I never thought New Mexico would have a professional soccer team, even when I moved to Colorado to play for the Switchbacks from Orange County, that was mainly because I wanted to be closer to New Mexico. I grew up here, and my pride and joy is in this state, and it means everything to be able to play for a club that puts all its meaning into representing the state and representing the people of the state. 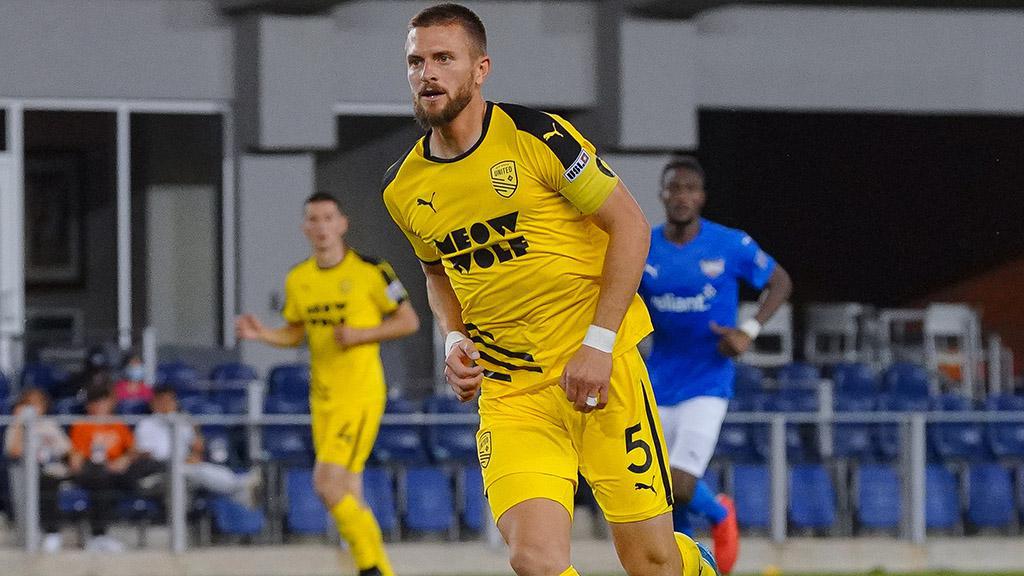 New Mexico United's Josh Suggs kicked off his 11th season in the professional ranks this year, having began his career with what is now Orange County SC in the Championship's inaugural season in 2011. | Photo courtesy Rio Grande Valley FC

NM: Thanks to a fancy online calculator, I figured out it will have been 574 days since you last played at The Lab when you take the field on Saturday night against Austin. What has it been like to not have your home field and the incredible support we saw in 2019 since that October, almost 19 months ago?

JS: That’s incredible. I didn’t realize it had been that many days. So, it’s amazing to me, the one thing that struck me was after a year of not playing in front of any of our fans other than the fans who would travel to away games with us, I would have thought we would have lost some momentum, and lost some support. That couldn’t be farther from the truth with our fans. Our fans have supported us every single day we were on the road.

These people live for New Mexico United, and even this past game in El Paso, it feels almost like we’re playing a home game there because there are so many of our fans. The El Paso fans outnumber our traveling support, but at the same time it’s hard to look at that stadium and not see a little bit of Black and Yellow throughout it. It’s been crazy – the last year has been crazy – but I just can’t wait to play in front of our people again.

NM: What has it meant to see the way the club and the fans have stuck together in that absence from competing at home?

JS: I just think the way New Mexicans are, we just stick together and we don’t shy away from adversity. To have a full year where COVID happened, where your team doesn’t play a home game, to continue that support, it’s almost like it’s in our DNA as people. That’s really just New Mexican pride, I’d say.

NM: We got to see the photoshoot last week in the hot air balloon to announce United’s partnership with New Mexico’s Tourism Board, and the New Mexico True campaign. How much fun was that with Devon Sandoval?

JS: That was amazing. I had actually never been in a hot air balloon before, I think Devon has. Growing up in Las Cruces, they don’t have as many hot air balloons as they do here in Albuquerque, so I think Devon, Justin Schmitt, they’ve been in hot air balloons before, but that was my first time. Really, it was incredible. I was kind of in awe of the whole situations and of the balloon itself, everything was really amazing, but just to have that sponsorship, New Mexico True, on our jersey, that means everything to us. That’s what we’re representing.

NM: So you got to take off and go up in the balloon as part of the shoot?

JS: Yes, we did. We got to fly a little bit. It was incredible.

NM: What’s that feeling like? I’ve never been in a hot air balloon before, but I imagine it’s a fascinating feeling when you’re out in the air like that, it’s not a plane, it’s not a helicopter, you’re literally out in the open. 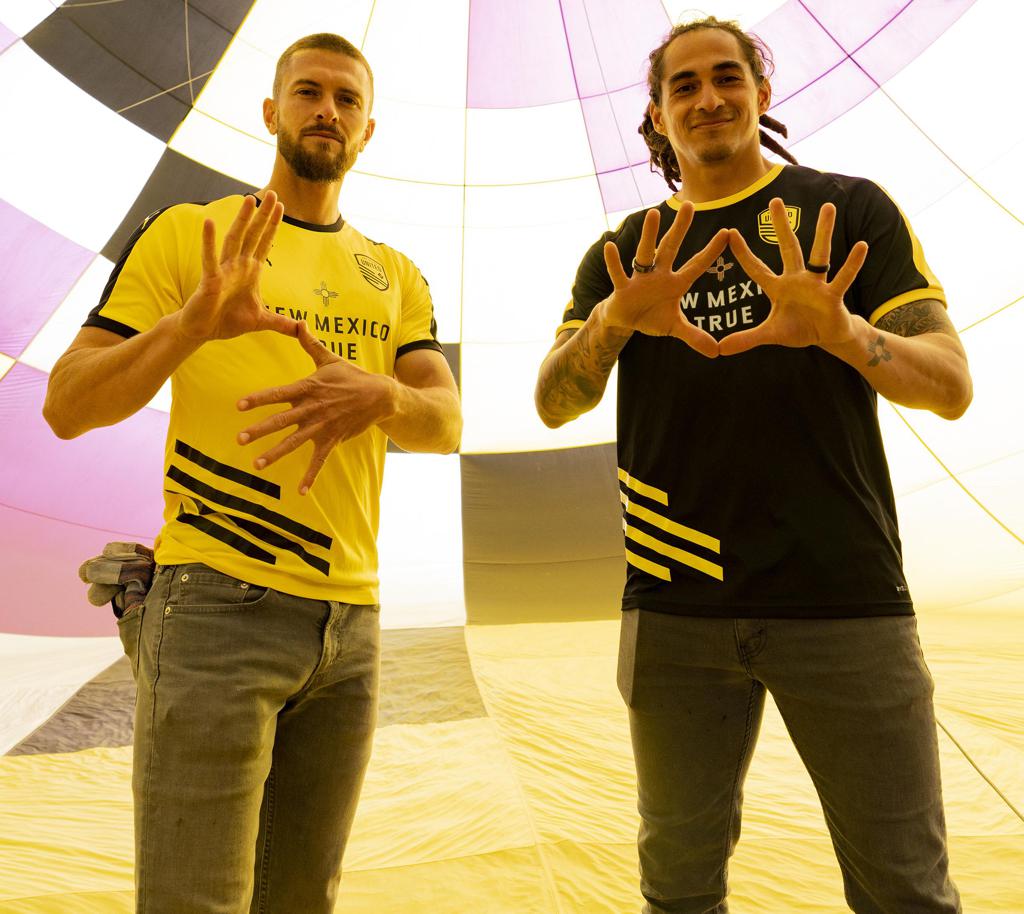 New Mexico United's Josh Suggs and Devon Sandoval got to take a ride in a hot air balloon after finishing the photo shoot for the promotion of the club's new partnership with the New Mexico Tourism Board, launched last week. | Photo courtesy Josh Lane / N

JS: Yeah, you almost have no control over it. They can go up and down, but there’s no steering that balloon. It was kind of amazing, you just go where the wind takes you. I thought that was pretty incredible. I had no idea how it really worked, but to see the whole process of inflating it and how everything worked, it was amazing. We didn’t go too far, but we did go up in the air and we did float for a while. It was awesome.

NM: You ready for your second go?

JS: Yeah, I definitely would like to go up again, for sure.

NM: What’s your favorite thing about your home state?

NM: You’re up to second all-time in the Championship in regular-season minutes played, behind only Taylor Mueller. What does it mean to sit in that position in the league’s history?

JS: To be completely honest, I don’t think much about it. It is weird, I remember hearing that stat for the first time, I think I was watching a Switchbacks game – we weren’t even playing – and they brought that stat out, it was [in the] “Around The League” news, and I was like, “Oh, wow, that’s incredible.” I had no idea, I didn’t know I was even close, so while it does mean a lot to me that I’ve played a significant amount of minutes and a significant amount of games and been consistent in that, again, I don’t think about it often.

I think it’s something when I’m finished with my career I can look back on and really evaluate, but right now I’m just enjoying every game. 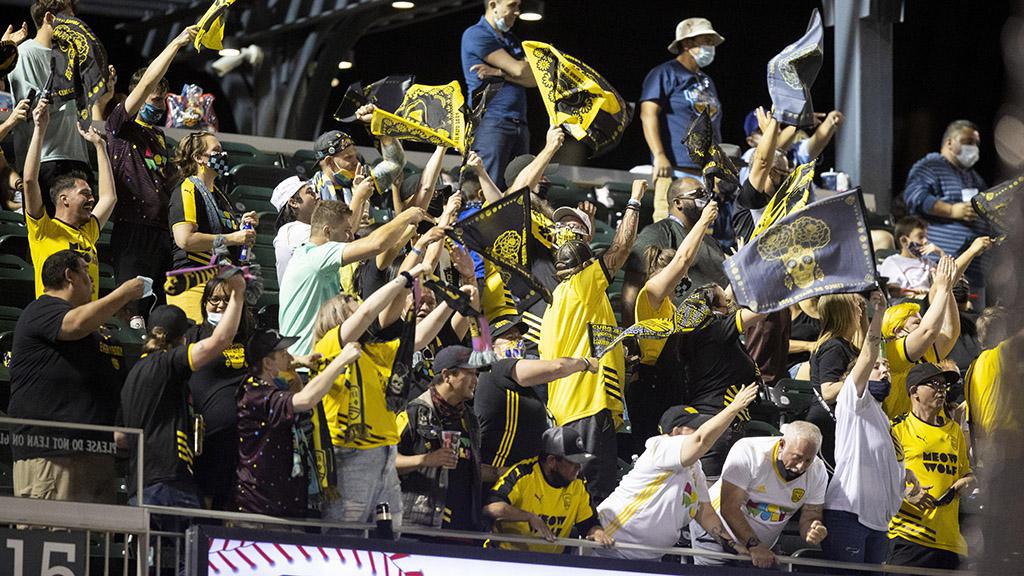 New Mexico United fans were out on the road last Saturday night for the club's game against regional rival El Paso Locomotive FC, but will be back at Isotopes Park this Saturday for the first time in more than 18 months. | Photo courtesy Ivan Pierre Aguir

NM: What do you think your emotions are going to be like when you walk out of the tunnel and onto the field on Saturday night?

JS: That’s another one that’s tough to describe. I think it’ll be similar to the first time we walked out the tunnel in 2019 when I was just in awe, and it was really emotional. I think it’ll probably be more emotional now, just because of what we’ve gone through as a state, as people living in Albuquerque together, struggling through this period of time. To be able to all come together and celebrate what we’ve accomplished in this past year as far as – I wouldn’t say beating this virus, but we’re on the way up, and that’s something to celebrate.