TAMPA, Fla. – The USL Championship announced the Team of the Week Presented by Cleer Audio for Week 3 of the 2021 regular season on Tuesday, with FC Tulsa’s Joaquin Rivas taking Player of the Week honors after scoring twice to lead his side past Indy Eleven for its third consecutive victory to start the campaign.

Now in his second stint in Tulsa, the El Salvador international reached a club milestone with his two goals against Indy on Saturday night, overtaking Sammy Ochoa for the most goals in club history with 21 for his career. Rivas now leads the early race for the Championship’s Golden Boot with four goals in his first three games of the season. 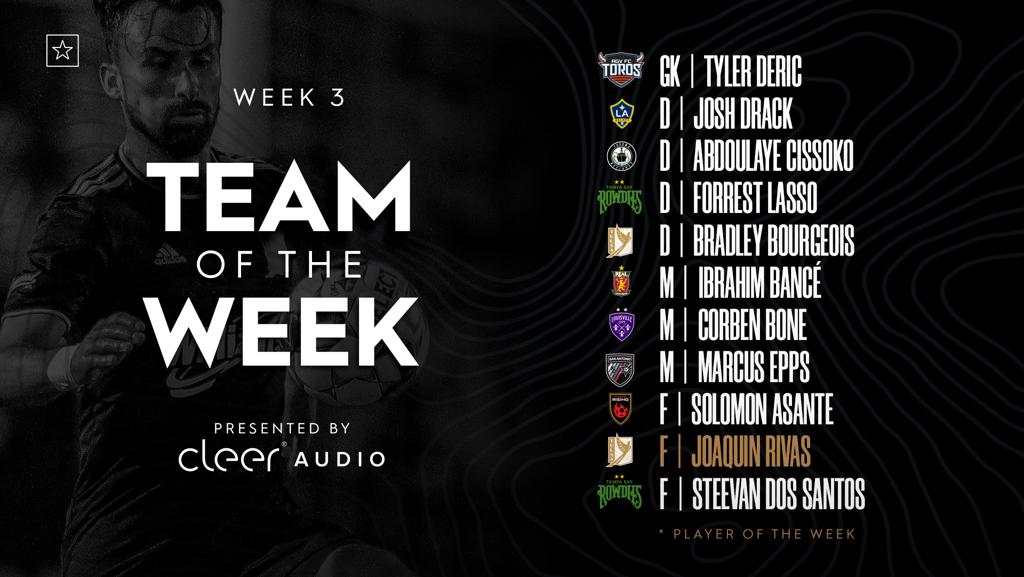 GK – Tyler Deric, Rio Grande Valley FC: Deric posted a three-save shutout to keep the Toros in the game against San Diego Loyal SC last Thursday night before the hosts grabbed a late winner for their second win of the season.

D – Abdoulaye Cissoko, Tacoma Defiance: Cissoko earned the Defiance a point on Sunday evening with a beautiful penalty kick in a 1-1 draw at the LA Galaxy II, and also completed 39 of 45 passes and made three interceptions.

D – Bradley Bourgeois, FC Tulsa: Bourgeois earned his second consecutive selection after recording an assist on Joaquin Rivas’ opening goal and winning 8 of 13 duels and 6 of 8 aerial duels and winning two tackles in his side’s win against Indy Eleven.

M – Ibrahim Bancé, Real Monarchs SLC: Bancé made a stellar debut for the Monarchs in the club’s 2-2 draw with San Antonio FC, scoring once while completing 31 of 41 passes, winning 8 of 11 duels and making 10 recoveries in midfield.

M – Marcus Epps, San Antonio FC: Epps scored his first goal for SAFC and finished with four shots overall while winning 11 of 18 duels and 5 of 7 aerial duels and recording seven recoveries in his side’s 2-2 draw with Real Monarchs SLC.

F – Joaquin Rivas, FC Tulsa: Rivas recorded his second two-goal outing of the campaign to lead Tulsa past Indy Eleven, becoming the club’s all-time leading scorer in the process, and had two key passes while completing 17 of 22 passes overall.