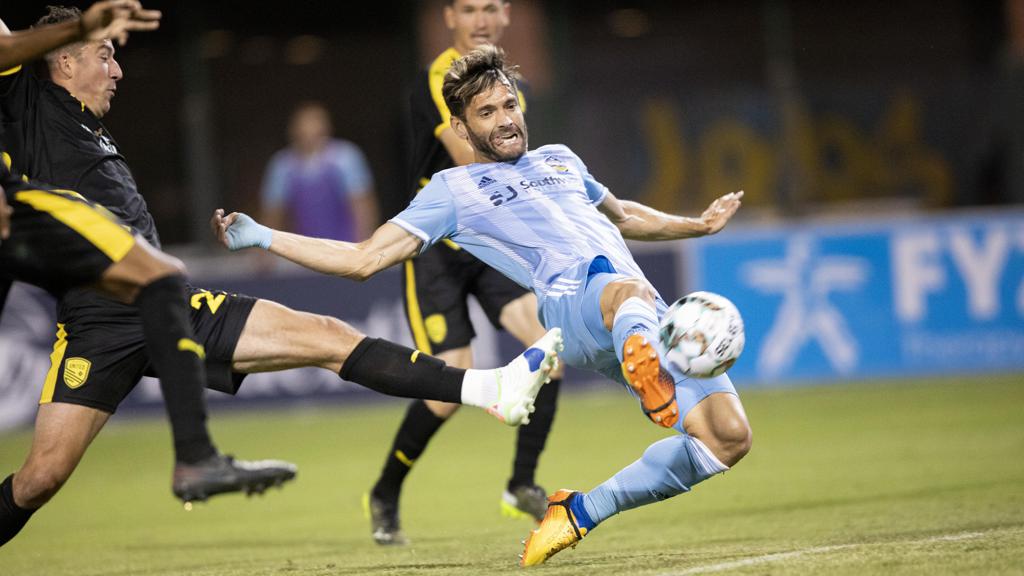 Saturday night’s Western Conference action saw Phoenix Rising FC produce once again, gave us another thriller between El Paso Locomotive FC and New Mexico United, and introduced us to another young standout we should be keeping an eye on moving forward. Here are five talking points coming out of the weekend.

If there’s anything we’ve learned from the previous meetings between El Paso Locomotive FC and New Mexico United, it’s to never stop watching until the final whistle goes. From last season’s final two encounters – which saw El Paso’s Dylan Mares score an 88th-minute winner in a 3-2 victory on September 5 in the final regular-season meeting of the season, and Romeo Parkes score deep in second-half stoppage time to send the game to extra time in the Western Conference Semifinals – these games have begun to produce late twists that have only added to the early legend the rivalry has built.

So it proved again on Saturday night when Leandro Carrijo’s goal in the fifth minute of second-half stoppage time gave Locomotive FC a 1-1 draw against its biggest rival at Southwest University Park, dashing New Mexico’s hopes of departing with its first win of the season. The Brazilian forward – who arrived last year from Borderplex neighbor FC Juarez – produced a high-quality volley to send the majority of the 5,740 fans on hand into celebrations.

“The resilience and the toughness of the group was fantastic,” said El Paso Head Coach Mark Lowry. “They only had one chance to score, and they scored it. We had three or four chances, better opportunities in the final third, that on another day we probably score, and they go in and the game looks different.”

While it might have been a daunting task for Oakland Roots SC to visit Phoenix Rising FC for its first game in the USL Championship, the unknown that Oakland brought in terms of what its lineup might look like and the approach it would take on the ball was also present as the sides met on Saturday night at Wild Horse Pass.

As it did in holding San Diego Loyal SC to only three shots on opening night, however, Phoenix’s back line and midfield showed a solidness defensively that will continue to grow as the new pieces develop more chemistry on the back line.

“There was just a lot of communication involved in tonight’s win,” said center back James Musa, who has moved back from his previous stint at the club where he patrolled the center of midfield. “We prepared well. We didn’t know exactly what they were going to do [because this was their first game in the USL Championship]. We had 11 strong players on the field. Thankfully we were able to put it all together tonight.”

It wasn’t all smooth sailing. There were moments that Phoenix Head Coach Rick Schantz thought his side got stretched by Roots SC, a trait that next Saturday’s opponent the Tampa Bay Rowdies will likely have a better chance to exploit than the Championship newcomers should that potential arise. With two wins out of two, though, Rising FC’s start to the season has matched what’s been expected.

“Right now, I am just happy we have six points in two games,” said Schantz. “The players feel confident. They’re playing well. We know we’re playing Tampa Bay Rowdies on Saturday. It’s a very good team. Very powerful and physical. This will be the biggest test we’ve had this year.”

You might recall last year the LA Galaxy II had a potent weapon at set pieces in Mauricio Cuevas. The youngster recorded four goals directly from free kicks in the 2020 season, easily the most in the Championship’s abbreviated campaign.

Well, don’t look now, but Los Dos appear to have another deadly piece in their lineup in Jorge Hernandez, who over the past week scored twice from free kicks himself as his side claimed four points out of six against Las Vegas Lights FC and Tacoma Defiance with a pair of sweetly struck finishes.

A Galaxy Academy product, Hernandez joined Los Dos last year after briefly attending UC Irvine before electing to join the pro ranks in September 2019 midway through his freshman year. He announced his return with a spectacular finish against San Antonio that same month, but now the 20-year-old is opening up new facets to his game with his ability to deliver from set pieces. With Hernandez left-footed and Cuevas right-footed, the Galaxy II could have two lethal weapons on their hands when Cuevas gets back into the lineup if teams give them a chance at set pieces from 25 yards or less very soon.

If you’re a glass-half-full sort of person, there was a decent amount to look back on Oakland Roots SC’s debut in the USL Championship on positively. The side looked organized overall, and against a powerful Phoenix Rising FC side battled well in winning the majority of duels and posting a 78.6 percent tackle success rate for the game at Wild Horse Pass.

What Roots SC also found out is that you simply can’t give a team of Phoenix’s caliber chances from your own mistakes, which ended up significantly impacting the 3-0 win Rising FC took on Saturday night.

“We gave up some cheap goals early in both halves,” said interim Head Coach Jordan Ferrell. “I think the response and personality we want the team to have was there. We need to get tighter on the defensive side for sure, not just our defense, we can get tighter as a full unit.”

You can say that again. The misguided waist-high pass back in the defensive third by Lindo Mfeka that handcuffed Wal Fall and led to Rufat Dadashov rifling a shot that Zeus de la Paz did well to save before Solomon Asante tucked home the rebound, and de la Paz’s errant pass that handed Asante his second of the game on a silver platter proved costly. Phoenix only notched a 1.36 Expected Goals mark for the game according to American Soccer Analysis, which by most measures would be creditable, but better decisions are going to be needed to ensure Oakland’s positive traits can shine.

In our conversation with El Paso Locomotive FC Head Coach Mark Lowry last week, he referred to 17-year-old Diego Luna as a player he believes has the same potential in the next 18 months to two years to match the level of San Antonio FC’s Jose Gallegos. That’s high praise considering some of the clubs currently in the picture to be Gallegos’ next move after his training stint with Bayern Munich this spring.

Not that we’d doubt Lowry, whose eye for talent is extremely keen, but the first look most of us got of Luna on Saturday night against New Mexico United showed the comparison looks very valid. Brought on as a substitute with 12 minutes to go, he had an impressive impact, starting with a great give-and-go with his first touches of the game that almost saw him level in the 80th minute only to be denied by United goalkeeper Alex Tambakis.

Luna had a key role to play in El Paso’s last-gasp equalizer, though, delivering the cross from the left that found Josue Aaron Gomez for a header back across goal that Leandro Carrijo seized upon to earn Locomotive FC a share of the spoils in a 1-1 draw. There should be plenty more to come from Luna this year, and we’ll be keeping a close eye on what the youngster who’s apparently been dubbed ‘Simba’ in the El Paso locker room - tip of the hat to Locomotive FC announcer Duke Keith for that one - has in store.