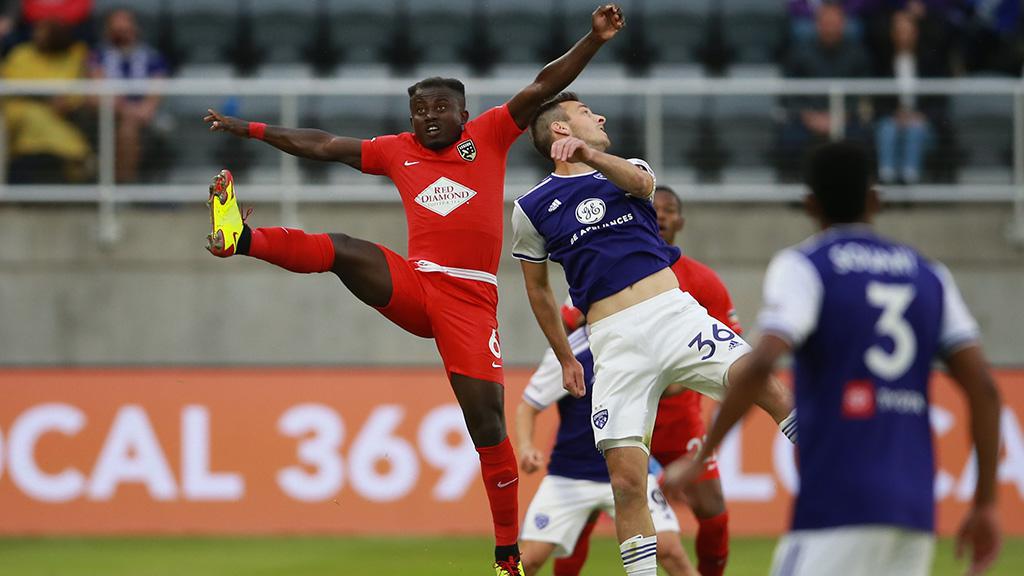 Birmingham Legion FC was knocked back early on Saturday night against Louisville City FC, but rebounded to earn its first point of the season in a 1-1 draw that saw the side battle strongly on the road. | Photo courtesy Em-Dash Photography / Louisville Ci

After big weekend victories for Hartford Athletic, the Tampa Bay Rowdies and FC Tulsa, the top of both the Atlantic and Central Divisions are taking quick early shape. Here are five talking points from the past weekend of action.

If there’s one thing teams going into Lynn Family Stadium should know, it’s the energy from the crowd at Louisville City FC’s magnificent home can lead to visitors quickly being put on the back foot by their hosts early in contests. That was certainly the case for Birmingham Legion FC on Saturday night, with Head Coach Tom Soehn’s quickly falling into an early deficit as three consecutive set pieces inside the opening three minutes led to LouCity’s opening goal by Pat McMahon.

Faced with the challenge of taking on the perennial contenders without not only two key strikers but center back and 2020 All-League selection Alex Crognale in its defensive line, Legion FC certainly could have buckled. Instead, the visitors showed the sort of gumption that is going to stand them in very good stead moving forward this campaign. A second-half equalizer by Neco Brett – which arrived correctly from the penalty spot after LouCity goalkeeper Chris Hubbard was penalized for leaving his line early on the initial attempt that was saved – gave Birmingham the goal it needed to level, and from there the side showed impressive resolve to hold off LouCity’s late advances in a 1-1 draw.

“I think we grew into the game, we also had moments where I felt like we still have to improve on keeping the ball and playing without panicking and dumping the ball long,” said Soehn. “I think that’s something that, once we have our core together regularly, I think we’ll have to grow into. I was real proud of the effort the guys put forward today. It was collective, everybody battled and competed. It’s tough going down that early and they found a way to come back and compete and at least come out of here with a point.”

It was inevitable, really. Facing his former club for the first time since his offseason move to the Tampa Bay Rowdies, Steevan Dos Santos’ first goal in Green and Gold came against Pittsburgh Riverhounds SC  on Saturday night, the opener in a 3-0 victory at Al Lang Stadium that continued the defending Eastern Conference Title holder’s strong start to the new campaign. While the Cape Verde forward declined to celebrate fully against a team and especially Head Coach he excelled for in the past, raising his arms almost apologetically after his fine header had found the net off Leo Fernandes’ cross in the 31st minute, Dos Santos’ opening two performances have shown why he should be a difference-maker for the Rowdies this season.

At 31-years old, Dos Santos is the second-eldest player on the Rowdies’ roster, with only Zimbabwean forward Lucky Mkosana his senior, making his arrival a change to Tampa Bay’s more recent trend toward signing younger players. His presence alongside Sebastian Guenzatti and the chemistry the two have developed has been on show in the opening two games of the season, with Dos Santos also earning a penalty kick that helped seal the game late on. The size, strength and work-rate of both players is looking likely to cause headaches for opposing defenses this season.

“You can see the front two/three working together and the back three working well together,” said Rowdies Head Coach Neill Collins after the game. “That was definitely a team performance. That’s the only way to beat a team like Pittsburgh, for everyone to be on the same page.”

With one of the marquee games of the regular season up next as Phoenix Rising FC comes to Al Lang Stadium next Saturday night, the Rowdies certainly look in a good place right now.

“I think the good thing is we’ve got good, experienced players that will know we’ve got a very tough challenge coming up next,” said Collins. “We’re so fortunate to have had the game tonight against a team that’s going to be challenging us all the way. Now we’ve got another team we expect to be challenging at the top of any standings.”

All a Head Coach can ask a player coming on as a substitute is to produce a positive impact in the time they have on the field. Hartford Athletic got just that from Preston Tabort Etaka on Saturday night, and as a result made it two wins out of two to start the new season.

Introduced to start the second half against Miami FC, the 22-year-old Cameroonian not only produced a stellar finish for the lone goal of the game at FIU Stadium but also put in a serious shift battling for possession on the Athletic’s front line. Tabort Etaka won 8 of 15 duels and posted a game-high five successful dribbles while tying for the game-high with three shots. Hartford might have been fortunate that Miami’s finishing was lacking – Billy Forbes in particular missing a gilt-edged chance to equalize after beating Jeff Caldwell to Pierre Da Silva’s through-ball in the 62nd minute, only to shoot wide – but Hartford earned some of that good luck through its own work, including Tabort Etaka’s.

“I felt like Preston dominated that one-v-one throughout the game,” said Hartford Athletic Head Coach Harry Watling. “He was fantastic. He's given me 90 minutes in 45 minutes. He's done a phenomenal job, he's covered so much ground, he's won his duels, if we can help him with his end product, he's gonna be a real handful.” 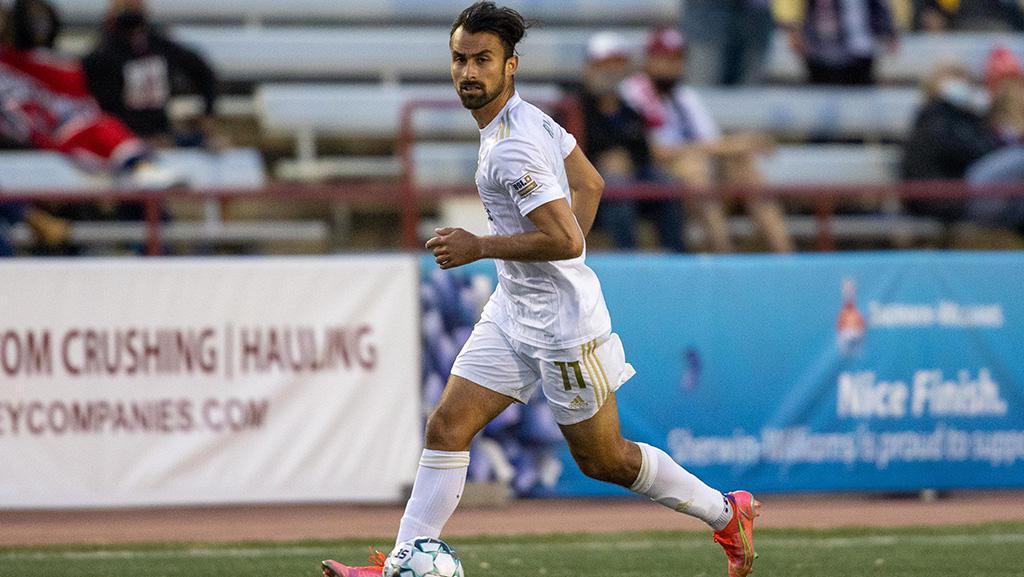 One of the questions for FC Tulsa in terms of individuals this season was how quickly returning forward Joaquin Rivas might surpass Sammy Ochoa for the club’s all-time record for goals scored. The answer, it turns out, was just three games as the El Salvador international struck for his second two-goal game of the season so far to give Tulsa a 2-0 victory on the road against Indy Eleven on Saturday night at Michael A. Carroll Stadium.

Rivas and Ochoa never played together for Tulsa – Rivas arrived in 2017 as Ochoa departed for Sacramento Republic FC that same season – but his ability to find the net has proven key to the club’s successes, both past and present. Rivas set the club’s single-season scoring record in 2018 with 12 tallies having previously helped Tulsa record its first postseason appearance in 2017. Now he has a chance to make a serious dent in the club’s record book this year – and potentially in years to come – as Tulsa continues to make its way toward becoming a serious contender in the Eastern Conference.

“It’s obviously an honor,” said Rivas. "This club definitely means a lot to me, and I’m willing to keep going and keep breaking records. Hopefully as a team, we’ll win something. These first three wins for us, and for myself, means a lot.”

GAME OF INCHES FOR INDY IN RETURN TO THE MIKE

Many of the numbers would indicate that Indy Eleven probably did enough to earn something from its defeat to FC Tulsa on Saturday night. In their return to Michael A. Carroll Stadium before a strong crowd that brought the atmosphere all were anticipating, they outshot Tulsa 16-4 and registered a 1.80-0.93 advantage in Expected Goals according to American Soccer Analysis.

In the end, though, the width of the woodwork denied Indy twice – Nick Moon striking the post in the first half before Ayoze’s late penalty kick rang the crossbar – leaving them with little to show for their efforts.

“It’s really a game of inches at times,” said Indy Head Coach Martin Rennie. “If we score the chance that hits the post in the first half then we get a little momentum and we start moving from there, but when we lose the goal it goes the opposite way.

“The first night in front of fans at Carroll in a long time, I thought that was a positive – the energy the fans brought was good. We need to make this a place where we get a lot of good results, where it’s very hard to come and I think it’s going to take a little more than what we showed tonight to do that.