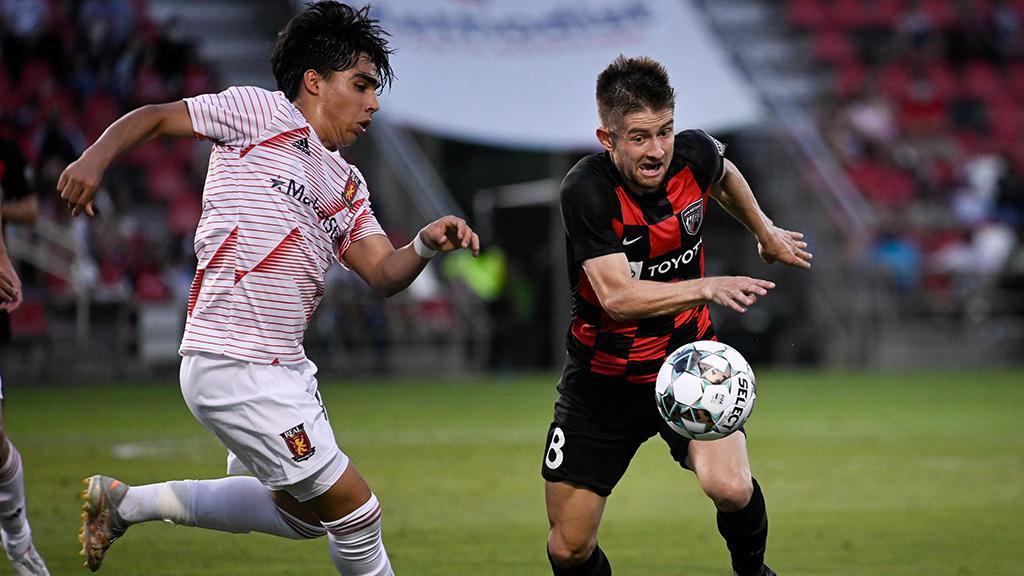 SAN ANTONIO – San Antonio FC and Real Monarchs SLC played to a 2-2 draw at Toyota Field on Saturday night in a game that saw the visitors rally back from a two-goal halftime deficit and both teams end the game with 10 players.

After a quiet start in the opening 15 minutes, the opening chance produced the opening goal for the hosts as Cam Lindley played a slide-rule pass between a pair of Monarchs defenders that allowed Marcus Epps to get in behind the back line and shoot low into the left corner of the net in the 19th minute.

The Monarchs almost hit back immediately as a low cross from the right by Chris Garcia was met by a first-time finish by Max Mata at the top of the six-yard area that produced a sharp save by SAFC goalkeeper Matt Cardone, but then in the 31st minute San Antonio was reduced to 10 men as Nathan Fogaca was sent off after kicking out at an opponent after the ball had gone into touch.

Despite being down a man, SAFC added to its lead a minute before halftime. After an initial shot by Epps was crowded out in the penalty area, the ball broke centrally where Emil Cuello was fastest to react and fired into the right side of the net.

The Monarchs took only two minutes to strike back in the second half as Bode Davis delivered a low cross from the right that was put home first time by Ibrahim Bancé from 10 yards into the left corner of the net. Davis then netted an equalizer in the 55th minute as a half-clearance to the top of the penalty area fell to the attacking midfielder for a low shot to the bottom-left corner of the net.

Real was also reduced to 10 men with 15 minutes to go, however, as Garcia received his second yellow card of the night, leaving the teams evened up for the final stages. San Antonio tried to take advantage and find a late winner, and it almost arrived with five minutes to go as Ollie Wright fired a volley that was saved by Monarchs goalkeeper Jeffrey Dewsnup.

San Antonio almost grabbed victory in second-half stoppage time as Cuello fired a shot from the top-right corner of the penalty area that floated over two challenging defenders and Dewsnup, only to hit the crossbar in the top-left corner and come back to be cleared. That proved the final chance as the teams shared the points in a thrilling contest.

Ibrahim Bancé, Real Monarchs SLC – Bancé scored the opening goal for the Monarchs early in the second half and won 7 of 10 duels, completed 32 of 42 passes and had three shots on the night.